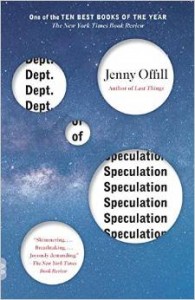 I had a bit of a shock when the New York Times named its top 10 books of 2014 – five fiction, five nonfiction.  One of the works of fiction – Jenny Offill’s Department of Speculation – was off my radar.  To be perfectly honest, I had never heard of it before.  Given that I’m paying pretty close attention to the new books coming down the pike, the fact that I had missed (or perhaps even worse, forgotten) any mention of this book made me squirm.  It might have even provoked a small crisis of self-doubt.

I bought the book right away and binge read it all in one sitting.  It’s short that way.  Strangely, but not ironically, it’s about self-doubt too.  And doomed love, mother love, married love, and self-love.  Department of Speculation is a curious and compelling book, a high impact read about domestic life that reads more like Emily Dickinson than Jane Austen.  (Imagine the hopeful and hopeless Emily Dickinson married and a working mother, dealing with the demands of a young child… possibly too far of a stretch.  Doubting myself here…)

The narrator’s marriage is in trouble.  She and her husband have been married seven or eight years and have a six-year-old daughter.  The narrator thinks about the high hopes we have for love, followed by its disappointments and complexities. “The only love that feels like love is the doomed kind,” she reflects, thinking about past lovers.  You can’t forget that she also thought of “doomed love” while holding her newborn daughter: “My love for her seemed doomed, hopelessly unrequited.  There should be songs for this, I thought, but if there were I didn’t know them.”

One thing the narrator does know is that marriage and parenthood profoundly changed the course of her life.  As a young woman, she had written a book, to some acclaim.  “My plan was to never get married,” she says. “I was going to be an art monster instead.  Women almost never become art monsters because art monsters only concern themselves with art, never mundane things.”  Then she falls in love with someone who loves her back and they have a baby.  She doesn’t find time for the second book everyone was waiting for.  She does continue to teach (she’s in a two-earner family).  This is the way of the world.

She doesn’t have regrets – not exactly – but then her marriage takes a surprising turn.  She has to figure out all over again what is most important to her.

I am only slightly exaggerating when I say that every page of this short novel holds a small wonder of prose.

On the narrator’s toddler daughter playing with stuffed animals: “Sometimes she plays a game now where she scatters her stuffed animals all over the living room. ‘Babies, babies,’ she mutters darkly as she covers them with white napkins. ‘Civil War Battlefield,’ we call it.”

At her desk:  “For years, I kept a Post-it note above my desk.  ‘WORK NOT LOVE!’ was what it said.  It seemed a sturdier kind of happiness.”

On the three things no one has ever said about her:

“You make it look so easy.
You are very mysterious.
You need to take yourself more seriously.”

This is a narrator who makes me want to laugh and cry with her.  She doubts herself, yet has an abiding will and enough confidence that she will fight for what she loves.  I loved every moment with her – and was reminded that self-doubt can be part of a great story.

Note to book clubs:  Department of Speculation is available in paperback as well as hardback.  I’m sure it’s available in a deeply unsatisfying electronic version as well.