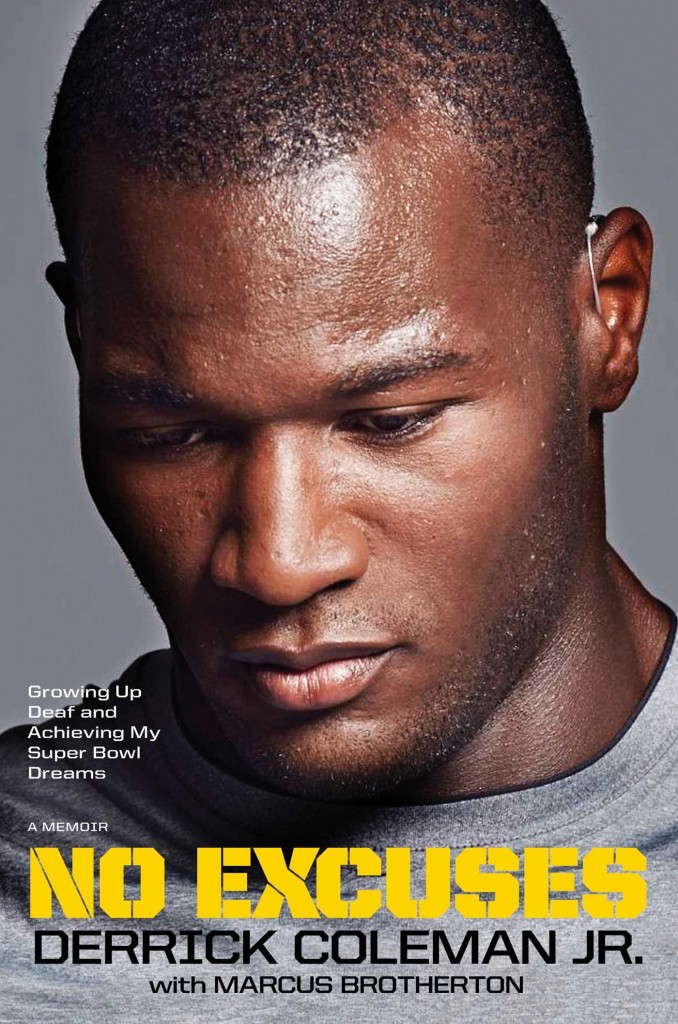 The NFL kicks off its regular season today.  If you’re a fan – and even if you’re not – you might consider reading Derrick Coleman Jr.’s terrific memoir, No Excuses: Growing Up Deaf and Achieving My Super Bowl Dreams (written with Marcus Brotherton).

The chances are that I will never have the opportunity to know Derrick Coleman Jr. personally.  This felt like the next best thing.  Coleman is friendly, conversational, and generous of heart, and he has a compelling story to tell.

Coleman grew up in Los Angeles in the 90’s (born October 18, 1990).  His parents never married but lived together for long stretches twice.  It wasn’t the most stable or traditional of living circumstances, but it isn’t exactly what you might expect:

“Sometimes when people hear you’re from L.A. and if you’re a person of color, they immediately assume that you grew up in a bad neighborhood.  But that’s not the case in my upbringing.  I lived in a few bad neighborhoods in the L.A. area, but Fullerton wasn’t one of them by any means.  Cal State Fullerton is nearby, and there’s a lot of university people and professionals in the area.  It’s just a good, basic suburb, but it did prove a bit of a culture shock, moving there from Lawndale.  We went from a school where the kids were predominately black and Mexican to a school where there were maybe four black kids in the entire school.”

“We were a strange sort of family in a lot of ways.  Separated parents.  A couple of kids from other relationships.  Two addresses.  Parents trying to make it at work.  A family trying hard to struggle up that ladder to make a better way in life.  But maybe we’re like a lot of families today, when you think of it.  We never had much, but we weren’t starving.  We didn’t look like a conventional family, but we always had a lot of love.”

Coleman’s main challenge growing up was his hearing impairment.  Legally deaf, he was fitted with hearing aids by age 2.  Elementary school kids can be cruel, and they were:

“When you’re hard of hearing, it’s really difficult to say certain letters, like s and r.  If you don’t hear a letter, then you can’t say it.  So with ‘school,’ I’d say it ‘cool.’  Or with ‘stop,’ I’d say it ‘top.’  (Of course, if I said ‘top’ when kids were making fun of me, they’d just do it all the more.)  I started speech therapy, and gradually that began to help.  But still, those years were really hard.”

Coleman also admits that he could be a pretty hard-headed little kid.  Sending him to his room for time-outs didn’t work too well; he’d just pick up a Hardy Boys book.  He credits his mother with figuring out how to keep him straight:  “I love the freedoms I can enjoy today as an adult, and those freedoms came in part because of good discipline when I was young.”  He also admires her deep-seated faith, which in time became his.

Coleman credits his father with getting other important things right:

“Every Saturday, whenever I stayed over at [Dad’s] place, he got up and cooked us breakfast, and then we’d head over to the rental to work.  We spent all morning sweeping up around the place, taking out trash, making sure the grounds were tidy and clean.  Dad was always talking to the residents, making sure everything was on an even keel.

I picked up his work ethic early on…. You don’t get anything in this life handed to you for free, he’d tell me. Everything you get – even a gift – you need to work for if you want to keep it; you need to work to learn how to use it or keep it sharp.”

Much of Coleman’s book goes on to describe what it was like playing football in middle school, high school, college and beyond.  Keeping hearing aids from moving around inside the helmet was one of the biggest earliest challenges:

“At first we tried a selection of various headbands – different brands, different materials.  We tried bandanas.  We tried hair scarfs.  We tried a terry-cloth towel.  I was always walking around with all kinds of stuff on my head.  My dad went on websites and talked to helmet and hearing aid manufacturers, always trying to find something that would work.  But nothing did.

Finally, one day my mom was back at the house and got the bright idea to cut up a pair of panty hose… She had the top portion of the panty hose, stuck it on top of my head, and sent me to practice.  I came home that day and said the magic words: ‘They worked fine.  They stayed in place.  There was no feedback.’

From then on, it was a done deal. I was a panty hose man.” 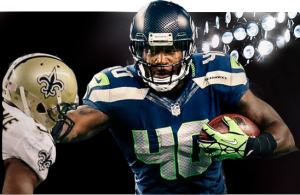 I learned a lot from Coleman about the NFL draft process and what it feels like inside an NFL locker room.  He had a couple of chances, first with the Minnesota Vikings and later with the New York Giants.  Neither of those worked out, and hard lessons were learned.  With the Seahawks in 2013, Coleman hit his stride; the team went on to win the Super Bowl that year.  He then broke his foot in the middle of the next season and didn’t have the chance to help his team the remainder of the year, which found them in the Super Bowl again.  He writes:

“When I sign autographs these days, I always sign my name and two other things – “No excuses” and “Be yourself.”  What I mean by that is don’t worry about the naysayers.  People will always tell you that you can’t do something.  Don’t listen to them.  Or do use what the naysayers say as fuel to push you forward.  If somebody tells you that you can’t do something, let that motivate you to prove people wrong….

Life is going to be hard.  You’re going to have obstacles.  You might win the Super Bowl only to break your foot a short time later.  That’s how life goes.  Up and down.  Down and up.  You always have to keep going up.”

I was inspired and encouraged by Coleman’s story.  My journey has not been anything like his – but every life has its choices and challenges.  His book encourages me to do what I love to do and to keep giving it my absolute best, despite the occasional naysayers.  I won’t pretend that a couple of dismissive comments about Bacon lately haven’t hurt.  Those comments have pushed me to think a bit more about what Bacon is for me.  It’s a playground and a gym; it’s a book club; at times it’s a serious literary endeavor, and at times it’s just looking for some fun.  It only works when others want to write and share their thoughts as well, and the community that is growing has been one of the things I’m most grateful for.  I’m grateful for every smart woman who has written at Bacon – homemaker and otherwise employed, mom and non-mom – and those fabulous gentlemen contributors as well.  Perhaps the deepest truth is that this is what I want to spend my time on, and I want to do it really well.

Coleman’s memoir is full of gratitude and grit.  I have taken to heart what he says when he signs autographs: No excuses. Be yourself.