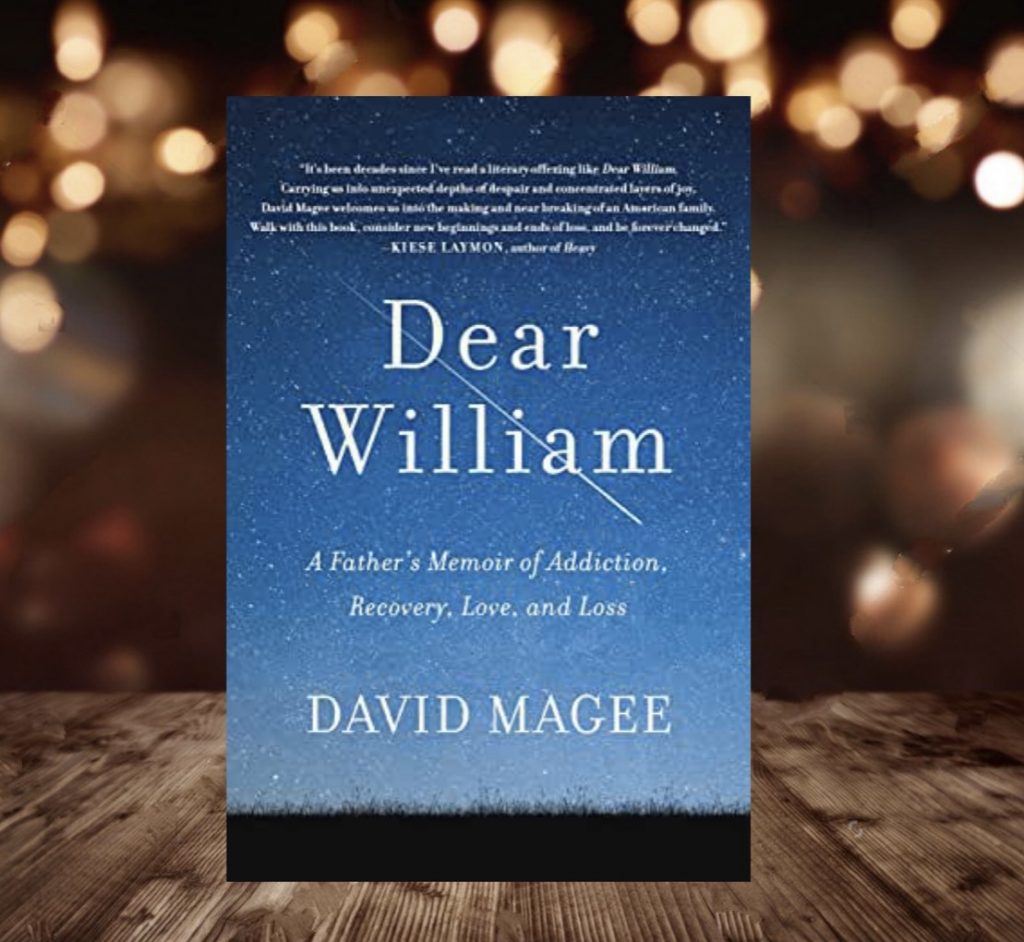 Dear William: A Father’s Memoir of Addiction, Recovery, Love, and Loss, by David Magee, came to me on the wings of a friend’s recommendation.

“For every child who is lost and every parent who has lost a child.”

I would say it is for every parent who has done their best. And has, in some ways, failed. (Is that all of us?)

You might have heard of David Magee. He hosted a business and news program on cable TV for a number of years. He’s written bestselling books on Toyota, John Deere, Phil Mickelson, Bill Ford at the Ford Motor Company, Jerry Jones and the Dallas Cowboys, and Carlos Ghosn at Nissan, among others. Magee currently serves as the Director of Institute Advancement at the University of Mississippi, after helping launch The William Magee Center for AOD and Wellness Education. “AOD” stands for “Alcohol and Other Drug”, in case you’re not familiar with that terminology.

Magee’s oldest son William died of a drug overdose, his younger son Hudson nearly did the same, and Magee himself struggled with addiction for years.

Magee’s story is heart-wrenching, beginning with the day a police officer blocks his entrance to his son William’s Nashville apartment. “Listen,” the officer said, “You don’t want to see this… You don’t want to remember him that way.”

William had been a tender-hearted boy, a collector of Beanie Babies, a competitive athlete, an active member of his fraternity, and an A student in the Honors College at Ole Miss. He was also in the grip of addictions that multiple treatment centers couldn’t break. On the night of his death, he had recently completed rehab in Nashville. He was working at the Apple Store. It was a warm spring evening, and he met up with a friend to see Widespread Panic at Ascend Amphitheater. He had planned to go easy and just have a beer or two. But one thing led to the next (vodka, weed, opiates, then cocaine). He died alone that night.

The week before the concert, Magee and William had been talking about Magee’s latest book project, which he was struggling to complete. William had a different idea:

“Do you ever think maybe other people could learn something from hearing about our story? I mean, when we were growing up, no one would have looked at our family, this all-American family that pretty much lacked for nothing, and predict how bad we’d crash. But maybe hearing what happened to us could help people. Maybe that’s the story you should tell.”

It’s been ten years since that conversation, and in Dear William, Magee tells their family’s story with honesty and raw emotion. He begins in his own childhood home, as the adopted son of a closeted gay man and apologetic mother. His adopted sister had tremendous rages that commanded much of his mother’s energy, leaving David too many of his father’s attentions. Their family dwelt in mistakes, silences, and lies:

“First, [Mom] married the wrong man. Then she got someone else’s children, and they were wrong too. And so she made excuses and looked on the bright side and waited for things to improve. But they never improved, and after a while, the pretending and covering up became more real than the truth. She believed her own Christmas card.”

As a high schooler, Magee learned that drinking could ease his own anger and pain.

In college, he hoped for a new start – as so many freshmen do – and in some ways, he found it. In particular, he found happiness with a soft-spoken and beautiful young woman named Kent. They married and had three children, and for a while their lives went according to plan. But Magee continued to feel “skittish and unsettled on the planet” in a profound way. He embarked on an emotionally costly journey to find the mother who gave him up at birth; reconnected with her and extended family members, with decidedly mixed results; and changed careers. His bad habits escalated.

“I’ve developed a crush on red wine,” he notes, and that’s an understatement.

In an attempt to save a family life that was beginning to fall apart, Magee and Kent moved from Oxford, Mississippi, to Lookout Mountain, near Chattanooga. No one could understand: “Of course, our departure would be perplexing. Wounded, troubled hearts beat out of view.”

In Chattanooga, Magee and Kent enjoyed establishing new professional and personal relationships. All the kids – William, Hudson, and Mary Halley – were making friends at their new schools. But danger signals emerged.

First, they found a homemade bong, made with a Gatorade bottle, in William’s room:

“It was my first time,” he asserts, “and it won’t happen again.”

“We want to believe him. And we do, or mostly we do; we can’t help it. We’re programmed to be our children’s greatest advocates, after all. We accept the statement, offering obligatory punishment.”

The red flags continue, but William also continues to thrive both as a student and an athlete, and he eventually follows in his father’s footsteps, to the Honors College at Ole Miss.

Hudson, too, is developing a problem alongside his achievements. He’s a soccer player on the school’s state-championship-contender team, and one afternoon he fails to show up for an important game.

“I see a pattern, first with our oldest and now with our second child, and as a parent, I’m entirely unprepared and unskilled for this dilemma. It’s possible I’m overreacting; he’s got just another few weeks of high school, and seniors are always cutting loose at this point. I simply don’t know the difference between experimenting and a problem.”

“What gives us hope is that Hudson is simply acting out, that this teenage rebellion is a phase that will pass, is that William is excelling.”

Magee doesn’t know a lot of what’s going on at Ole Miss. William is excelling, yes, but also he’s been kicked out of his fraternity house for drug use, he’s mixing OxyContin and alcohol on the regular… and he’s sharing Xanax with his younger brother.

Magee does know that he himself has been prescribed what seems like a miracle drug to help with his mood and focus – Adderall. “Best drug ever,” he tells his wife.

Mary Halley, in the meanwhile, is binging and purging.

A year and a half later, Kent has served him divorce papers and Magee has moved out of the family home. He’s spending Christmas morning alone at Waffle House.

He cannot know it, but the worst is yet to come, for himself and for his family.

The great gift of this book, to me, is the way it considers the subject of “hope”.

Hope can be deceptive and dangerous – as when we hope for the best in spite of facts and warning signs. We can believe too much in our hopes – in the Christmas card picture, or the child who says he doesn’t have a problem.

Hope can also allow us to find a way forward after seemingly unbearable tragedy. This kind of hope involves deep humility and painstaking honesty. It shines a light into dark places. It makes peace with the past and finds a way to live in the present. This kind of hope is a broken thing with wings that does yet soar. 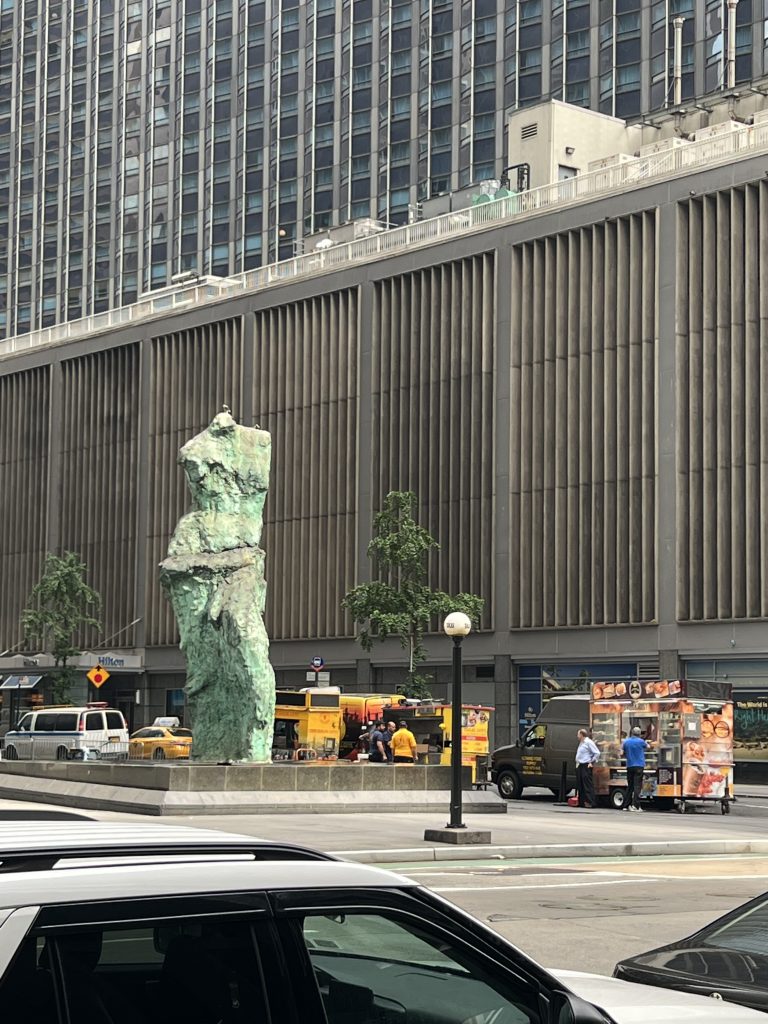 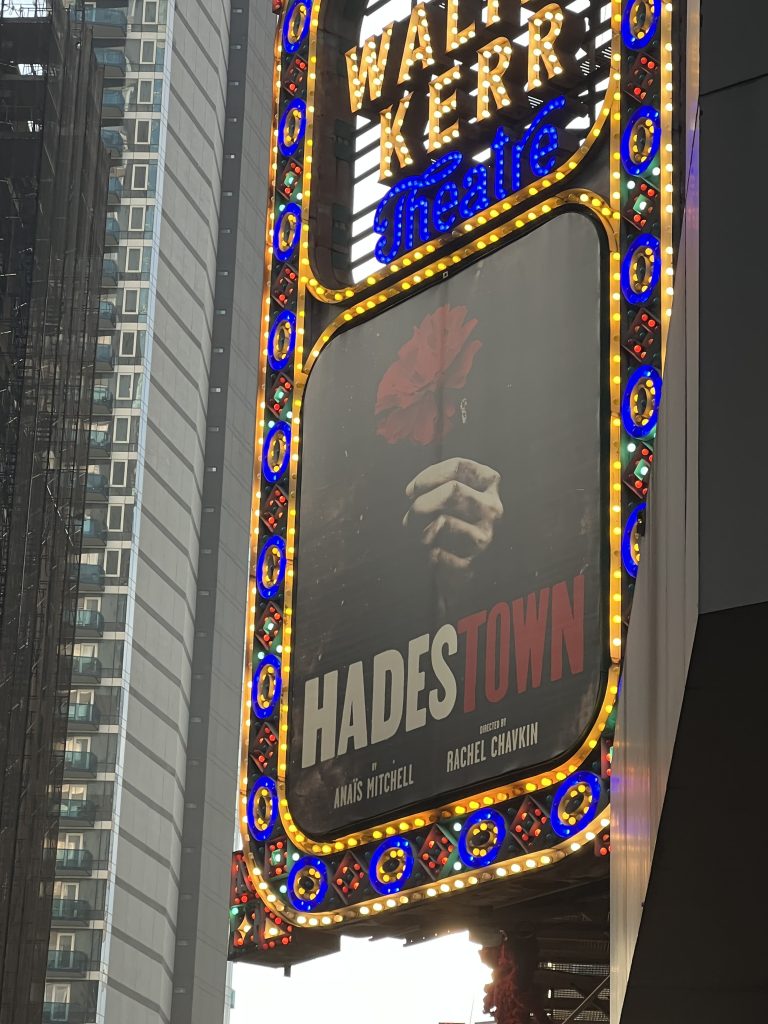 The pandemic was grinding us down in the fall of 2020. Or, I should say, it was grinding me down. Things that had been new and secretly good about staying home were losing their shine. Loneliness, that dark flower, grew. And the days grew shorter and colder too.

One comfort in that season was the music from the Broadway show “Hadestown”. I’m not sure how I got so hooked on it, but I sang those songs and wrote about the show at Bacon for weeks. This past weekend, I got to see it on Broadway.

“Are you going to cry?” my older daughter asked, as we walked from our hotel to the Walter Kerr Theatre. 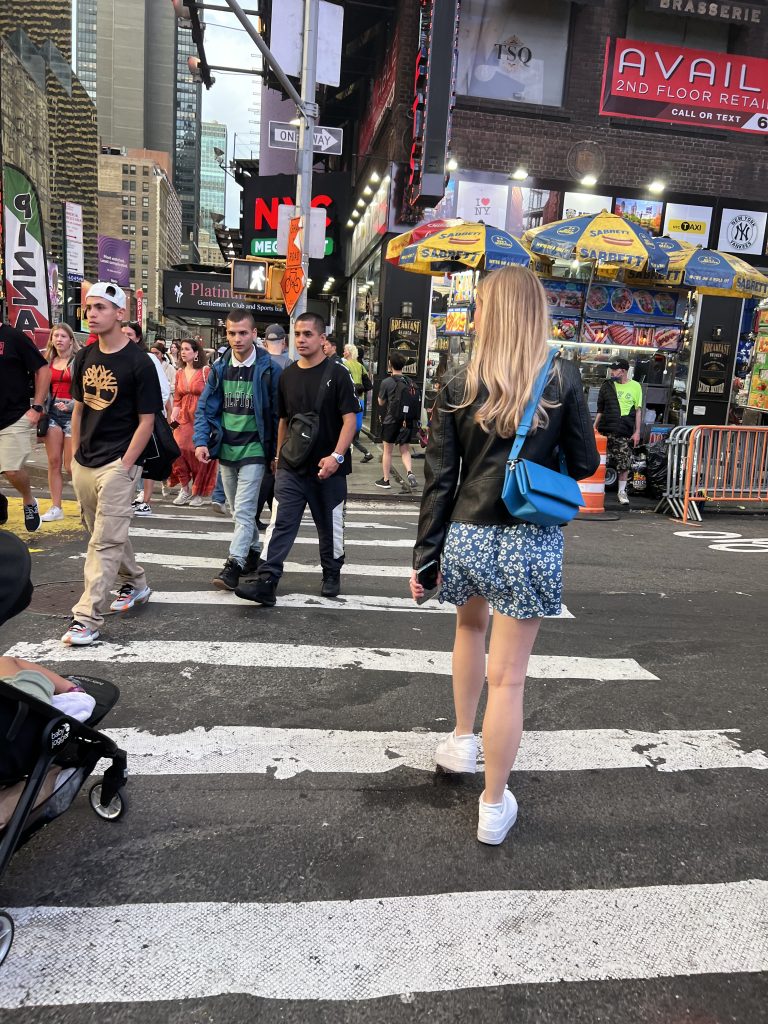 In “Hadestown”, the King of the Underworld mourns the loss of his wife Persephone when she returns to the surface of the earth each year for six months, bringing spring and summer.

Things aren’t right between them. She has fun “livin it up on top” and only returns to him reluctantly.

Persephone, up above, meets the young musician Orpheus, much in love with the beautiful Eurydice. He’s working on a song to restore balance and harmony on earth, and Eurydice believes in him. After Persephone returns to the underworld, harrowing storms follow in her wake. Orpheus continues to work on his song, not hearing the woeful cries of his beloved Eurydice.

Eurydice, in her fear and anguish, turns to the King of the Underworld for comfort. He convinces her to return to Hades with him.

What follows are the trials of Orpheus: his journey to the underworld; his pleas to Hades to release Eurydice from her bondage; and – hardest of all – the great and final test Hades sets before him. Orpheus must travel the long journey back to the surface, Eurydice behind him, without once looking back to confirm that she has chosen to stay with him.

We tell it again and again, hoping for a different ending each time.

We know, in our hearts, that the story can’t change. It was long ago. But we can.

[When Orpheus and Eurydice fall in love:]

Eurydice, with all the love and joy a heart can hold, asks this of Orpheus: promise me that things will always be this way.

“I promise,” he says – and I would have believed that boy too.

One’s heart breaks for their love, and their youth, and for their belief that anything might stay the same.

One must not hold too tightly to anything, I have come to believe… and you should never ask love to stay still.

Love will grow or it will diminish. It will twist and turn and reach for the light; it will sink into the abyss and crawl out screaming; it will take one step at a time, calm and steadfast; it will run and also stumble; it will feast and it will starve; sometimes it lasts, yes, but it is always moving, through us and between us.

The wind will always change on us, dear Orpheus and Eurydice…

For more on “Hadestown”, you’ll see that there’s an entire tab at the top of your screen, with 9 or 10 posts. 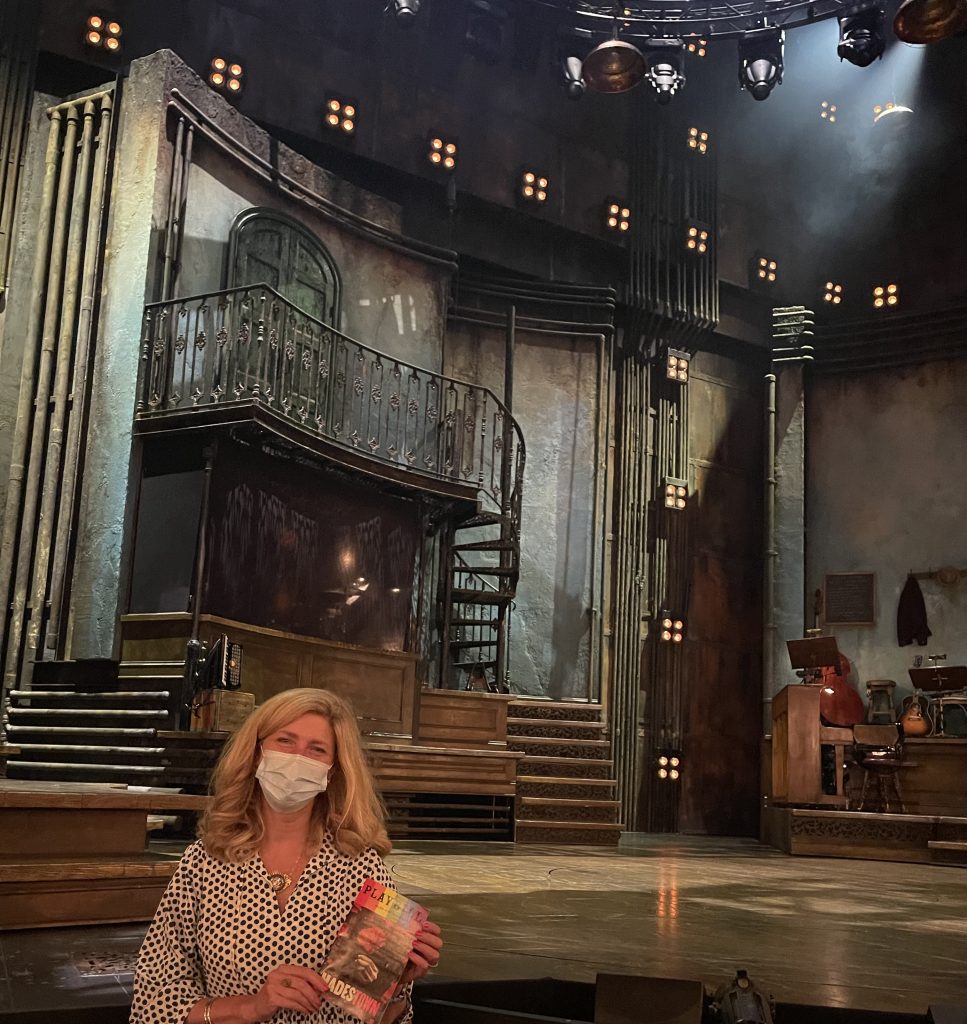 And in the hotel room, I continue to take great comfort from Prayer in the Night, by Tish Harrison Warren:

Does God ever bring emotional or spiritual or even physical healing in an instant? Sometimes. He certainly can. But soothing most often looks like tiny provisions, crags of grace on a long climb. There is healing in the Christian life. There is soothing. I’ve tasted it and even seen it, but we don’t get to choose when or how it comes.

Pierre Teilhard de Chardin reminds us, “Above all, trust in the slow work of God.” We ask the Lord to soothe the suffering, and then we remember de Chardin’s call:

Give Our Lord the benefit of believing
that his hand is leading you,
and accept the anxiety of feeling yourself
in suspense and incomplete. 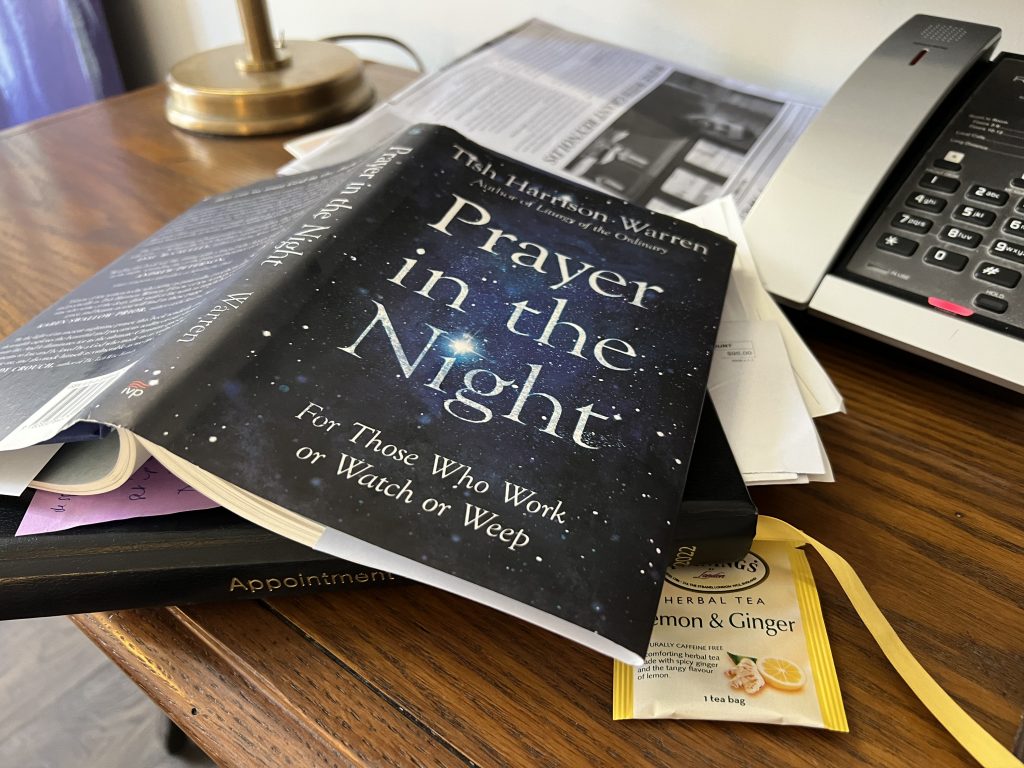