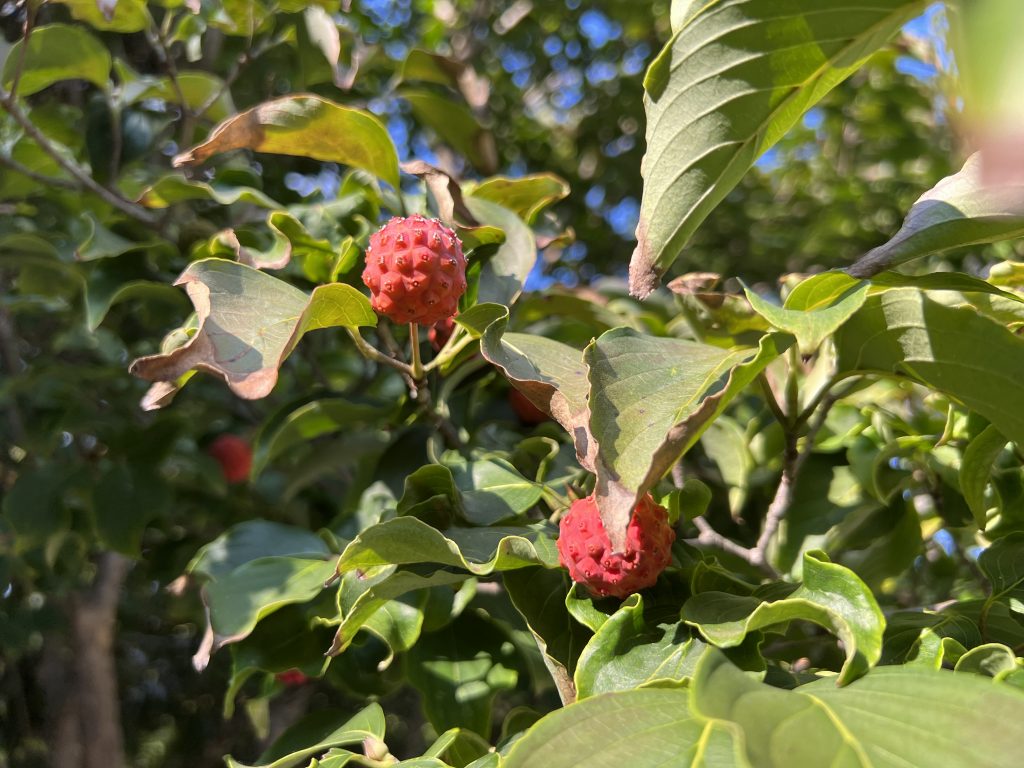 Seed of the Kouza dogwood

Glory be to God for dappled things –
For skies of couple-colour as a brinded cow;
For rose-moles all in stipple upon trout that swim;
Fresh-firecoal chestnut-falls; finches’ wings;
Landscape plotted and pieced – fold, fallow, and plough;
And áll trádes, their gear and tackle and trim.
All things counter, original, spare, strange;
Whatever is fickle, freckled (who knows how?)
With swift, slow; sweet, sour; adazzle, dim;
He fathers-forth whose beauty is past change:
Praise him. 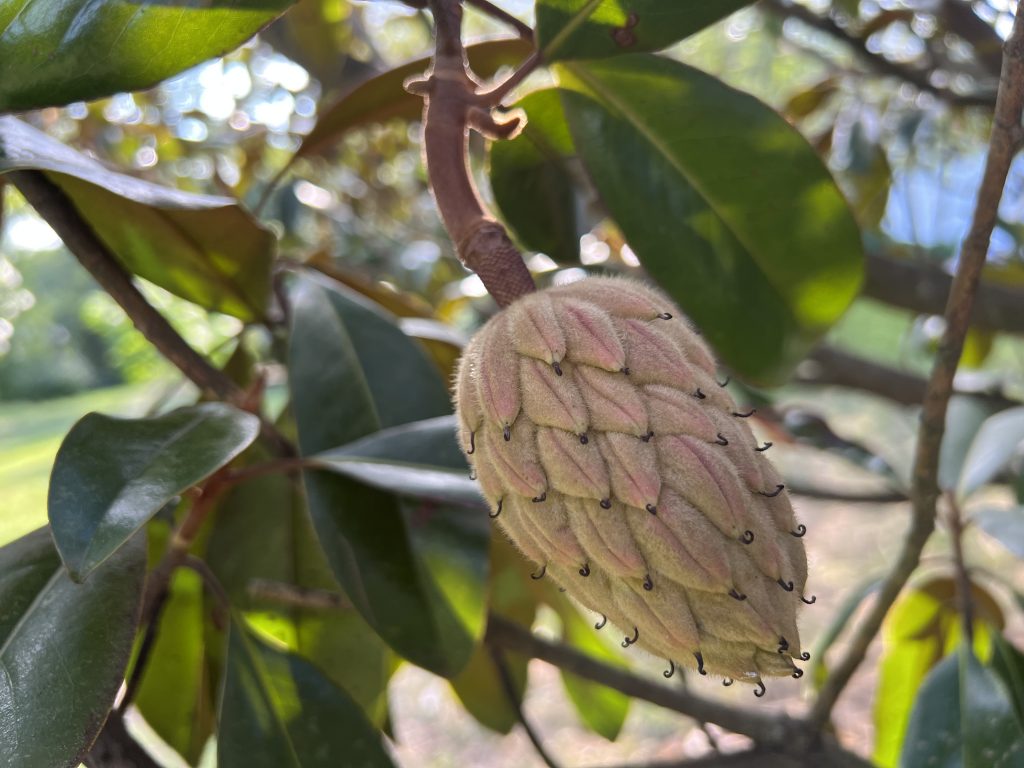 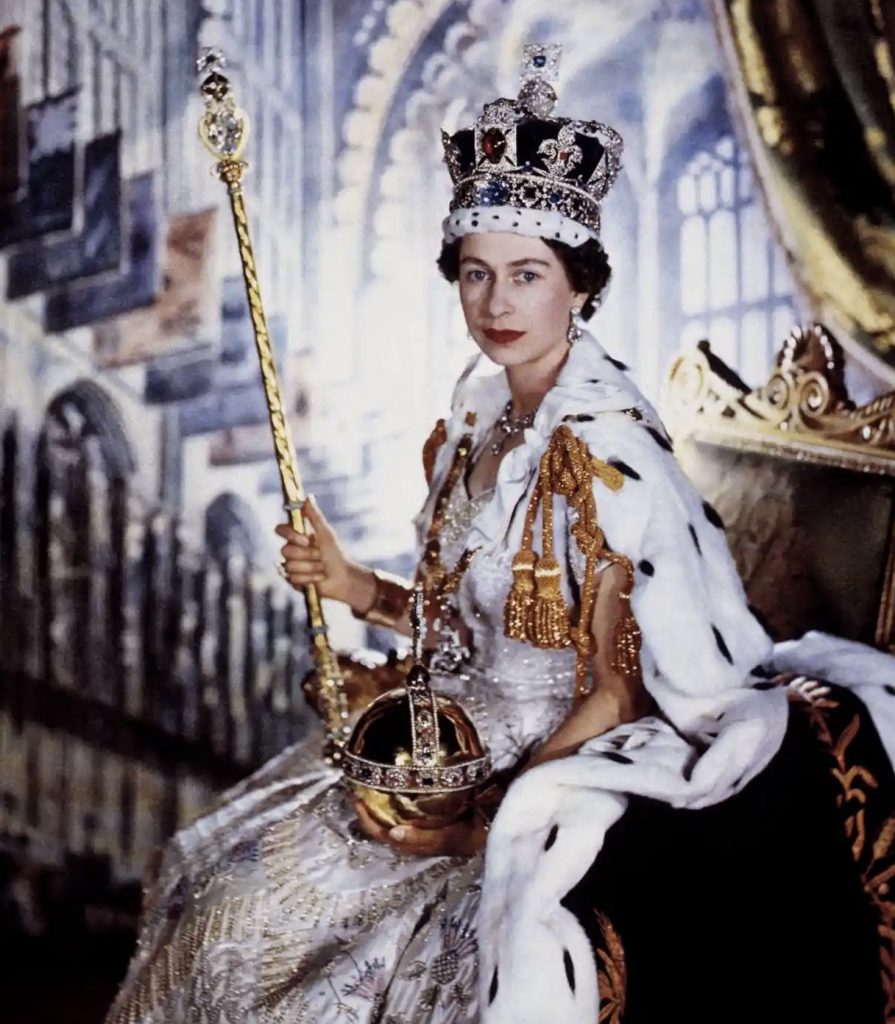 I asked my British friend how she felt about the Queen’s passing. “She was my Queen,” she began – simply, quietly. Then proceeded from there, mentioning virtues so many of us admire. But it was the way she began that brought home to me some measure of what the monarchy means – or has meant – to many. I too grieve her passing.

The best piece I’ve read on Queen Elizabeth is by David French in his newsletter The Dispatch, and I’m so glad to share it with you today. He’s onto something…

“I’m writing today from Ketchikan, Alaska, on the last leg of the first real vacation my family has taken in a very long time. For my Sunday newsletter, I thought about directing you to this marvelous tribute to Queen Elizabeth II by Andrew Sullivan and calling it a day. I don’t hold myself out as any kind of expert on the British royal family, and I certainly can’t fully grasp the nature of the connection between the queen and the British people.

Andrew, however, helped me understand. He wrote this:

You can make all sorts of solid arguments against a constitutional monarchy—but the point of monarchy is precisely that it is not the fruit of an argument. It is emphatically not an Enlightenment institution. It’s a primordial institution smuggled into a democratic system. It has nothing to do with merit and logic and everything to do with authority and mystery—two deeply human needs our modern world has trouble satisfying without danger.

The Crown represents something from the ancient past, a logically indefensible but emotionally salient symbol of something called a nation, something that gives its members meaning and happiness.

I’d urge you to read the entire thing, but he also included a C.S. Lewis quote I hadn’t remembered that struck me in a way that’s directly relevant to Americans and especially relevant to our time. Here’s Lewis:

Where men are forbidden to honor a king, they honor millionaires, athletes, or film stars instead; even famous prostitutes or gangsters. For spiritual nature, like bodily nature, will be served; deny it food and it will gobble poison.

I’m not sure I entirely agree with Lewis here (the choice isn’t necessarily between honoring a king and honoring celebrities), but he’s getting at something important. We are drawn to honoring individuals—especially when an individual represents a cause or place we love.

Britain’s constitutional monarchy separates the functions of the head of state and the head of government. The head of state is doing her job when she’s explicitly not political, when she instead conducts the formal affairs of the state and embodies (as well as any human can) certain core national values.

There is a tremendous burden tied to that kind of role. As Andrew notes, when Elizabeth Windsor became queen, she “was tasked as a twenty-something with a job that required her to say or do nothing that could be misconstrued, controversial, or even interestingly human—for the rest of her life.”

…Duty and honor without power—that’s the role of modern royalty. And that’s why personal scandal can be so crushing. When they fail and fall, it hits differently from the failures of ordinary politicians. Their fundamental purpose is to embody a certain national ideal.

But there is also immense meaning when a monarch lives the values their role demands. Queen Elizabeth lived with honor and did her duty, and in so doing she helped bind together a fractious people. She helped give them a sense of shared identity.

Again, we Americans can’t quite grasp this connection; to us the British royal family functions mainly as a different form of celebrity. But we can and should grasp something else—nations and cultures need people and institutions who transcend politics.

Our republic combines the functions of head of state and head of the executive branch in one person, the president. But aside from singular moments—Ronald Reagan addressing the nation after the Challenger disaster, Barack Obama singing Amazing Grace at the funeral for Charleston church shooting victim Clementa Pinckney—politics tend to dominate a president’s life and legacy.

The politicization of everything is a threat to any nation, but it’s especially a threat to our nation. We’re simply too diverse and too different to turn every single institution into an instrument of red or blue. Just as we can’t have red history and blue history, we can’t thrive as a people when we have red coffee and blue coffee, red movies and blue movies, red sports and blue sports.

…Before I run too far down the field, let me tie this back to the Queen. She spent more than 70 years as the head of state of one of the world’s most powerful nations. She was one of the most-watched and most-famous people in the world. She had an immense platform, but more important than that, she had an institution to protect and values to uphold.

It was not an institution to use for political gain or for political objectives, no matter the “fierce urgency of the now” or any other phrase we use to justify the politicization of everything. She knew her role, and she lived her role. Does anyone doubt the wisdom of her choice?

None of us will be in an equivalent position, but each of us will be far more defined by who we are rather than where we stand, and no one should think for a moment that upholding our values, building our families, and preserving virtuous institutions compromises our life’s purpose. There are legacies that transcend politics, and in demonstrating that truth, Queen Elizabeth performed one last service for us all.” 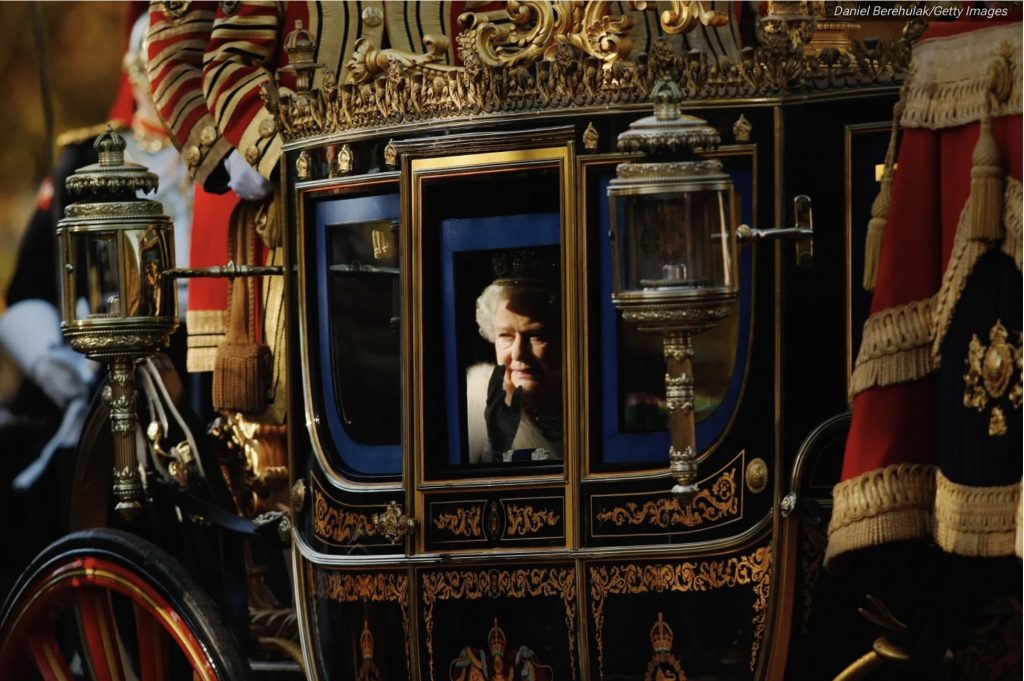 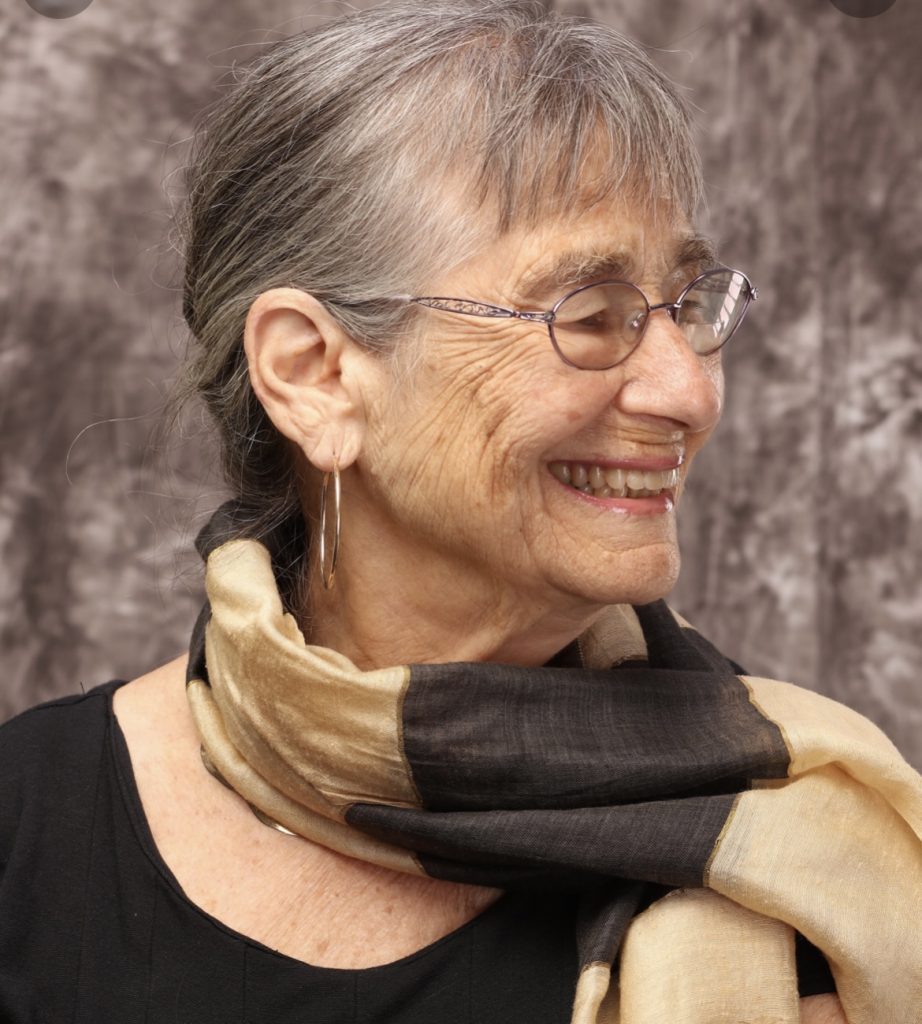 I’ve been hiking in the Santa Monica Mountains, often alone, with a guide far ahead.

To be blessed is to see the flag on the trail (which is the guide saying – follow me). 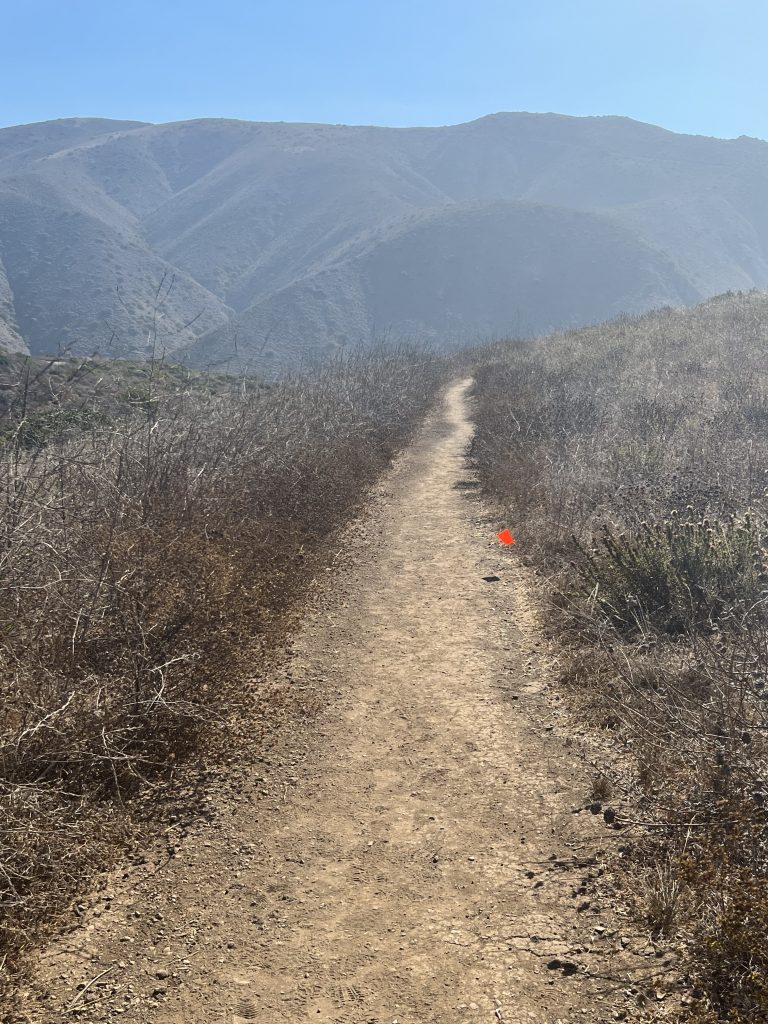