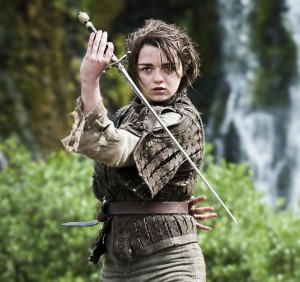 Arya from Game of Thrones comicvine.gamespot.com

Arya’s got nothing on Regular Bacon Contributor Laura Cooper.  They both know how to place the dagger.

When I was in junior high, I had a girl-crush on a classmate named Ann.  I was over-tall and scratchy, in my wire-framed glasses and Dorothy Hamill haircut.  She was a tiny, cheerful China doll with long, swingy buttercream hair, moving with ease (it seemed) across every clique and category our small-town adolescence could invent.

And she had a most wonderful handbag.  I don’t mean just the outside, though it was itself a marvel – flower-tooled leather, streaming red suede fringe.  But even more fascinating was what she carried inside that bag.  For unlike me, with rarely more than ChapStick and Bic pens in my pocket, Ann traveled always with a small bazaar of treasures: lip gloss and nail polish in shades like “Goa,” small snap purses of embroidered neon silk, loose Sweet Tart candy, colored pencils and scented notepaper, thin trays of blue and green eye shadow, hair bands and rhinestone barrettes, one glass poodle figurine.  Multiple mood rings.  And most exotic of all, a dog-eared pocket Astrology guide and planner for Geminis, 1976.

So many captivating oddities, floating free-form inside Ann’s bag.  Engrossing and dazzling, a pure expression of her jubilant spirit and magpie eye, her essential coolness.  What gawky girl in glasses could resist?  I bought my own pocket Astrology guide and planner, 1976.  The Virgo edition.

Ann’s bewitching bag came to mind as I read Dana Spiotta’s new novel, Innocents and Others.  Ostensibly the story of three women whose lives are linked and marked – scarred, even – by filmmaking, Innocents and Others is also, and perhaps more deeply, the cool girl’s bag of exotic lures.

First, the plot.  The characters Meadow and Carrie are both filmmakers and (conflicted) best friends for life, since being assigned seats together in 9th grade Film class at a private Santa Monica school for the arts.  Meadow is wealthy, slim, and confident, “a sleek sex kitten” with an opulent collection of books and vinyl records bought by doting, successful parents.  Carrie is a scholarship kid, the “chubby” only child of a divorced mother who ropes her into sharing fad diets of Tab and SlimFast, but otherwise leaves her alone to watch endless 1970s television.  (Who knew The Love Boat and Donny and Marie would someday invade high-end literary fiction?).

Meadow and Carrie discover they both like filming things: Meadow with a Super 8 camera and black and white film, “which was rare,” and Carrie with a video camera she uses to tape her cat gazing out a window while she reads Sartre and Camus aloud, in French – which, it turns out, is hilarious to watch later.  The two friends are inseparable through high school and through their young twenties, while Carrie attends NYU film school and Meadow makes experimental documentaries from an abandoned glove factory in upstate New York.

Both Meadow and Carrie become famous filmmakers, Carrie known for commercial comedies, starring women, about women’s lives (kind of a cross between Nancy Meyer and Tina Fey).  Meadow makes searing, unflinching documentaries about, say, an alleged government spy accused of provoking the National Guard into firing on the student protestors at Kent State.  About Argentinian strongmen in the Dirty War, who led death flights and mass kidnappings, but then reared the stolen babies lovingly as their own.  About Meadow’s 17-year-old lover, who lets her interview him for 8 hours straight, near the end of which he confesses to a brutal crime.

Meadow’s most consequential film, however, is about the novel’s third main character, a lonely woman who cold-calls men in the Hollywood film business to seduce them into, well, conversation, just talking on the phone, about their work.  Muse-like, this woman (Amy, a/k/a Nicole, a/k/a Jelly), lets the men believe she is young and beautiful, even though she is, as Spiotta draws her, “squishy, middle-aged,” “a jelly doughnut,” “a heavy, invisible, unremarkable creature.”  With one man, disembodied talk leads to love, and Amy/Jelly must face her lies.  Meadow, the documentarian, orchestrates then films a climax to Amy’s story, an act that transforms both women’s lives.

Innocents and Others creates and follows these women – as they circle the big questions of identity, ambition, creativity, competition, selfishness, loyalty, and the urge to self-mythologize – with prose that is generous and rich, dense, open-handedly sharing Spiotta’s vision of her imagined world.  We know intimately how characters look, how their rooms look, their houses, their clothes, their gestures, their thoughts; what they see and think when they gaze at a loved one, at a river, at a train track, at the sky.  There is nothing spare or withholding about it, nothing kept back, nothing coy.  Like her filmmakers, Spiotta follows Thoreau’s injunction, the novel’s epigraph, to pursue “the discipline of looking at what is to be seen.”

And yet, to me, Innocents and Others never gels into something greater than all this vivid, radiantly portrayed detail.  In fact, much of the novel reads like a stack of voluminous, exquisitely tasteful, and very select, very erudite inventories.  The prose blurs into long lists of significant (and/or exceptionally obscure) movies and filmmakers.  Lists of mythic film projects that were lost or never got made.  Lists of cameras and equipment. (As in: Éclair 16 mm camera, Nagra IV-STC, Magnasync Moviola upright editing console, Betacam video camera, a vintage wind-up Bell & Howell 16 mm Filmo camera, a pro Mini DV camera; the seminal Super 8).  Lists even of Carrie’s low-culture artifacts – all the bad ‘70s TV shows she watches alone, all the bad packaged food she eats.

So many facts.  So many cool details.  How bewitching, that bag full of stuff.

As a reader, I found all this distracting and disappointing, but more, I was puzzled: why would this gifted, celebrated writer – whom the New York Times credits with creating “a new kind of great American novel” – resort clunkily to this kind of fact-jamming?

So I read a second Dana Spiotta novel, Eat the Document, from 2006. 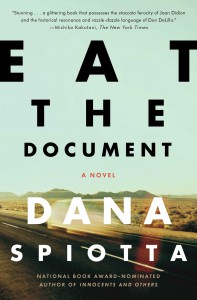 Shortlisted for the National Book Award, this book is about two lovers, both anti-Vietnam activists, who commit a violent crime in the name of political protest.  The two must separate and go into hiding, where they spend the next twenty years living invented identities, reconsidering their youthful commitments, and wondering about each other’s fate.  Like Innocents and Others, this earlier novel lets Spiotta raise questions about identity, self-creation, alienation, and the high cost of human intimacy.  (Plus, one Document character makes a cameo appearance in Innocents, as – naturally – an obscure filmmaking genius, a nice little reward for the close reader.)

More to the point, like Innocents and Others, Eat the Document is packed full of luminously rendered bits and pieces from the material culture – here, not obscure films, but rare recordings of late-20th century music: first-pressing vinyl albums, and/or “[o]bscure European or Japanese reissues in 180-gram vinyl,” or any one of the “all-time great ‘lost’ albums” with “gatefold” inner sleeves and “a cryptic message carved in the run-out groove.”  The prized, very rare “extended-box-set-bootleg” version of the Beach Boys’ Smile recording sessions, with ten, fifteen, twenty takes of a single song; demos and outtakes downloaded from underground pirate-fan websites.

And it’s not just music.  One main character collects fragments of “broken things”:

a series of vintage plastic objects, not so much a plate or a radio but a piece of something, a curve, a handle, a corner.  They were that old imitation ivory, . . . urea resins, or acrylic, or phenolic molding masses.  Co-or homopolymers, . . . melamine, Bakelite, celluloid.

Why all the stuff in Spiotta world?  The material bits and pieces are undoubtedly fun to describe in prose – the “resiny yellows . . . [and] blow-molded reds and greens, meant to evoke nothing in nature,” that “still emi[t] odd, vintage toxins” you can smell when you press them close.  All that in-the-zone, prayer-like meditation on Beach Boys outtakes, re-played over and over.

So, yes, fun to write, but why else?  Eat the Document lets one character share a clue:

Authenticity.  We like the inside story, the secrets.  We constantly feel the best, coolest stuff is being withheld from us. . . . There is always more stuff to be had.

So are we meant to read Spiotta as indicting late-20th century American materialist culture?  Are we meant to mourn the existential loneliness of life on soulless suburban cul-de-sacs or in Bel Air mansions, with humans we can never understand or truly love, and nothing to do except listen, in headphones, to obscure music, or watch difficult experimental movies on bootleg websites?

Maybe.  But I think another character in Eat the Document might cut closer to the truth.  One of the novel’s 20-year fugitives, he sits in on a meeting where a younger man is enthusiastically praising a:

neo-Luddite group, the Formatters, [who] are all about retro formatting, . . . like eight-millimeter, Super Eight or sixteen-millimeter film.  Vinyl records, eight-track tapes, even laser discs.  As long as it is obsolete, it’s included.

The fugitive considers, then remarks, “Sounds to me like they just value whatever is obscure and difficult to access.  Obscuristas.  Seems elitist.”

And in the end, I have to agree. 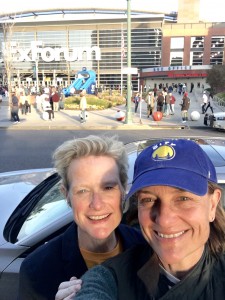 I love this picture of you and your sister Kate about to watch the Golden State Warriors play the Memphis Grizzlies in Memphis a couple of weeks ago.  “I can’t think when I’ve had more fun!  I would confess we are devoted Stephen Curry fans, but honestly both teams were so appealing and played with incredible heart.  And breakfast at Arcade too!  No better weekend.”

That does sound great!  But can it compare to this Sunday, April 24th, when Game of Thrones resumes?  I’m dreaming of you, my bloody valentine…