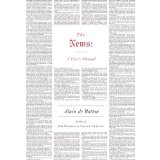 In The News:  A User’s Manual, Alain de Botton examines with his usual thoughtfulness and wicked humor the state of news reporting today.  His conclusion:  Journalists fail us, utterly!  DeBotton is well known for his deep dives into subjects that interest him; bestsellers include How Proust Can Change Your Life, The Art of Travel and The Architecture of Happiness.  (He also wrote How to Think More About Sex, an inspired little work.)  His latest book will change the way you think about the news, possibly profoundly.

DeBotton argues that serious, important issues are often hidden in articles that no one reads because the stories are told in disconnected and disorienting dribs and drabs (which then come across as boring).  Given the choice of a compelling story about cannibalism and incest in Sydney instead, of course people read that!  Journalists need to connect the dots and give the bigger picture, which would at least give the weightier stories a fighting chance.  DeBotton hates boring, and he also hates sensational masquerading as serious — the political gaffe being the prime example.  Political gaffes are almost always meaningless yet can suck all of the oxygen out of the newsroom for days.  DeBotton gets equally worked up over foreign crisis coverage that leaves most readers numb: it is difficult to care, he says, when readers are fed crisis after crisis without any context or description of everyday life in foreign places. “We don’t know whether anyone has ever had a normal day in the Democratic Republic of Congo, for no such thing has ever been recorded by a Western news organization,” he writes, in exasperation. 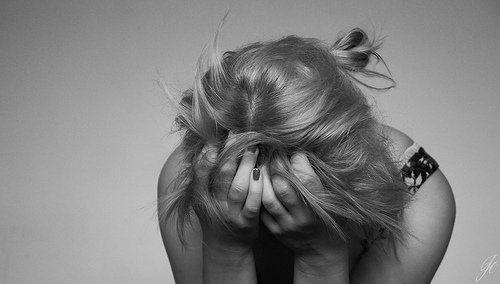 DeBotton also considers the typical (and in his view, inadequate) ways in which journalists cover celebrities, murder and mayhem, natural disasters, and culture.  He is fascinating on the subject of the envy that the news often generates in readers:  “In response to the stories of achievement it places before us, the news invites us to feel content and mature:  quietly pleased by the tycoon’s success, impressed by the entrepreneur’s initiative, thoughtfully interested in the artist’s global fame…Existential panic may not, of course, seem like the most reasonable reaction to an upbeat, glossily illustrated feature entitled ‘Silicon Valley’s Top Twenty Investors,’ but after scanning such a story, we may nevertheless come perilously close to hurling the supplement to one side, banging our fists on the table and, with an anguished sob, screaming at a world that doesn’t care (or at our surprised spouse, in the act of preparing lunch), ‘I can’t take being me any more!’

The News is a thoughtful, funny rant and a call to arms.  DeBotton argues strongly for more context and deeper reporting, but he also makes a passionate case for something broader that might be called “right reporting” –  stories that help the reader become a more educated and active member of a democracy, and also a better human being.  On envy, for instance, deBotton suggests that journalists should write stories as case studies in hard work and achievement rather than simple celebrity worship.  This would allow readers to respond in a more constructive manner, for “envy is also an indispensable feature of a decent life…it contains garbled messages sent by muddled but important parts of our personalities about what we should be doing with the rest of our lives.  Listening to envy should help us take painful yet necessary steps towards becoming who we really are.” That makes a lot of sense!  DeBotton helps you think about the way the news is delivered AND the way it is received.