You probably remember that Memorial Day – first known as “Decoration Day” – originated as an official holiday in the United States following the carnage of the Civil War.  The U.S. Department of Veterans Affairs reminded me that honoring those who die in war has ancient roots:

The Athenian leader Pericles offered a tribute to the fallen heroes of the Peloponnesian War over 24 centuries ago that could be applied today to the 1.1 million Americans who have died in the nation’s wars: “Not only are they commemorated by columns and inscriptions, but there dwells also an unwritten memorial of them, graven not on stone but in the hearts of men.” 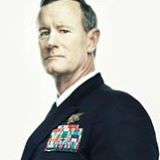 Today I’d like to share with you some words of wisdom from one of the living who serves our country.  Admiral William H. McRaven, top commander of U.S. Special Operations, also organized and executed Operation Neptune Spear, in which Osama bin Laden was killed.  McRaven gave a commencement address at the University of Texas at Austin last week that was printed in this weekend’s Wall Street Journal and New York Post.  In his address, Admiral McRaven shared ten life lessons from his Navy SEAL training.  This column goes in my “keep forever” file.

Several times a week, the instructors would line up the class and do a uniform inspection.  It was exceptionally thorough.  Your hat had to be perfectly starched, your uniform immaculately pressed and your belt buckle shiny and void of any smudges.

But it seemed that no matter how much effort you put into starching your hat, or pressing your uniform or polishing your belt buckle, it just wasn’t good enough.  The instructors would find “something” wrong.

For failing the uniform inspection, the student had to run, fully clothed, into the surfzone and then, wet from head to toe, roll around on the beach until every part of your body was covered with sand.  The effect was known as a “sugar cookie.”  You stayed in that uniform the rest of the day – cold, wet and sandy.

There were many students who just couldn’t accept the fact that all their effort was in vain….

Those students didn’t make it through training.  Those students didn’t understand the purpose of the drill.  You were never going to succeed.  You were never going to have the perfect uniform.  Sometimes, no matter how well you prepare or how well you perform, you still end up as a sugar cookie.  It’s just the way life is sometimes.

If you want to change the world, get over being a sugar cookie and keep moving forward.

Admiral McRaven’s address does not reflect on death, service, or remembrance; it is of course directed towards the young as they commence their lives after graduation.  Today seems a good day to think about death – and life.  I will pause to reflect on the debt of gratitude I owe to those who died serving our country in battle.  It also occurs to me that we are all marching towards death one way or another.  I am grateful to those who distill their wisdom about how to live and share it with me.