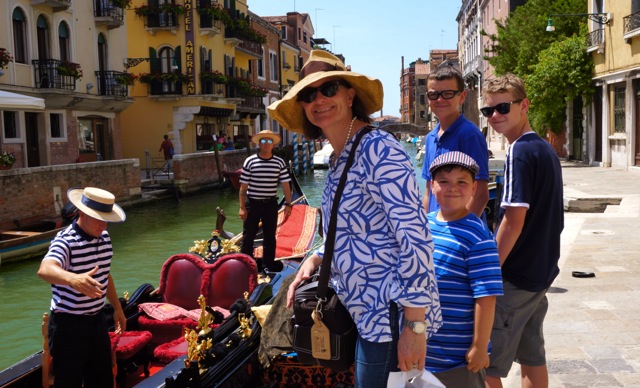 Regular Bacon contributor Laura Cooper recently returned from a family trip to Italy, where her army of three sons and a husband were equal parts barbarians at the gate and consumers of gelato.  Today, she thinks about the American abroad, historically speaking.  For Laura’s bio and to read her prior post, please click here!  I’m so happy to share her thoughts again today.

From Laura:  It’s nearly the Fourth of July – our 238th anniversary as an upstart start-up.  As a Nation, we’re having a great run, but there’s no denying our persistent fascination with Europe.  That forever push-pull between rowdy independence and backwards-glance yearning makes for great fiction.  And a terrific summer beach read.

Nope, I’m not going to talk about a Henry James novel.  Though I could, since he perfected the plot where a modern, clean-lined American travels to Europe then slips into the murky, entrancing embrace of a culture where social values are fatally foreign and obscure.  Instead, here’s a book that bumps the classic plot line up a few notches on the creepy scale: The Talented Mr. Ripley, by Patricia Highsmith, a prose master so personally peculiar that she carried live snails in her handbag to entertain herself when bored at dinner parties.

First published in 1955, The Talented Mr. Ripley tells the story of an American father, a shipbuilding magnate, whose adult son, Dickie, has run off

to a tiny town on the Bay of Naples to escape his future as heir to the family business.  The father, desperate to retrieve his son, makes a terrible error: he mistakes a penniless, small-time conman named Tom Ripley for one of Dickie’s college friends, and he asks Ripley to travel to Italy and persuade Dickie to return home to New York.

Classic set-up.  In fact, Henry James’s The Ambassadors starts almost exactly the same way (minus the conman).  But where James explores how the benign, innocent American messenger is first enchanted and then ensnared by European culture, Tom Ripley carries to Italy a ruthless self-regard, a raw hunger for wealth and experience, that remains fully American, in its own twisted way.  Henry James, on the Dark Side.

Ripley finds Dickie, befriends him, and falls in love.  He falls in love with Dickie, but even more with Dickie’s life, with his money and easy social confidence, with his leisure and his personal charm, with his privileged, educated way of talking and standing and dressing and sailing his small boat in the Bay.  Dickie’s the American golden boy, the perfect Jamesean expatriate, and Ripley is ravenous to be him.

So one day, when they’re alone together in a small boat off the Italian Riviera, Tom Ripley bludgeons Dickie to death with an oar and dumps his body into the sea.  He then assumes Dickie’s identity so seamlessly – cashing his checks, wearing his clothes, forging letters to his friends and family – that it takes months and a second murder for the Italian police and Dickie’s circle even to notice that something strange is happening.

All the while, Tom Ripley chases his fantasy of the cultivated European life, as alluring to him as to any Henry James heroine.  He rents an elegant palazzo on Venice’s Grand Canal, where he carefully polishes his custom antelope suitcase and admires his new collection of leather-bound books. He’s a fixture on the expat cocktail circuit.  He daydreams about collecting fine art, and even funding young artists like a modern de Medici.  He plots his travels through Europe, Asia, and South America.  He keeps his crimes well out of mind, at least most of the time.

Will Tom Ripley get caught?  Or will he fool everyone with his trail of intricate stone-cold lies, rooted so deeply in that most American of ambitions: to rise above his origins and live the life he thinks he deserves?  That’s the mystery in this novel, that magic spot where Agatha Christie meets Fyodor Dostoyevsky.  If you can bear the suspense, and the sheer claustrophobic company of the talented Tom Ripley, this book is a thrilling read.

Nothing more fun for the Fourth of July.