You can tell when Todd Jones enters the room.  All of a sudden, things get livelier.  People are more animated and warmer.  They’re following his lead.  You won’t see many yawns when he’s in the pulpit most Sundays at First Pres!  If I could invent a minister from scratch, I’d hope to come up with Todd Jones. 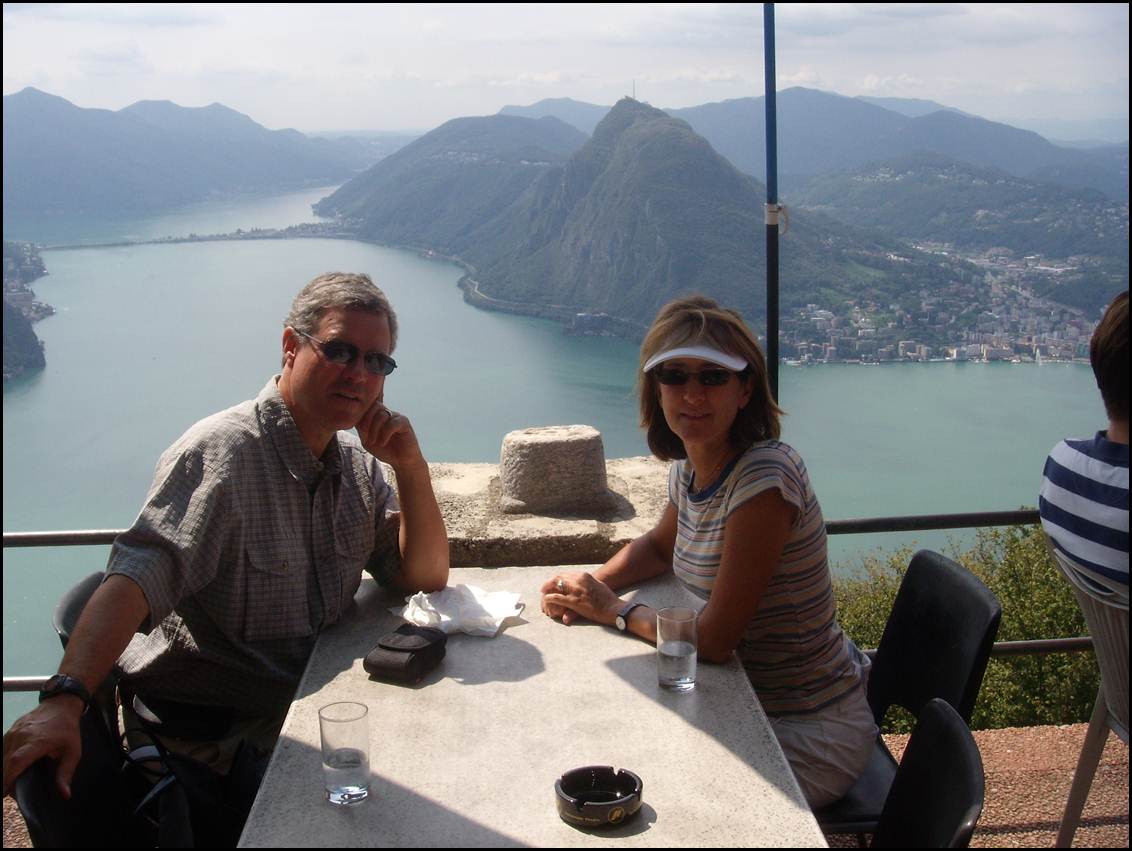 Todd was born and raised in Pittsburgh, Pennsylvania.  He received his degree in divinity from Princeton Theological Seminary then spent a fellowship year at the University of Edinburgh.  Three congregations later (one in New Jersey and two in South Carolina), he found his way to Nashville in 2002.  After marrying local – the lovely and delightful Connie King – Todd says Nashville truly became home.

Todd and Connie spend many happy hours hiking in Percy Warner Park, his favorite thing to do in Nashville.  A rainy day might find him reading or watching a good game on TV.  First choice: Steelers or Pirates.

Todd shared a few thoughts on childhood and parenting with me prior to today’s post.  “I had a very happy childhood,” he says, “largely because I was blessed with wise, dependable, loving parents.  I tell my children, who are both parents now, that I had better parents than they did!”

I was very interested in his advice on parenting teenagers.  “The secret to parenting teenagers is to love them in such a way that they want more than anything else to please you, and then to want what is best for THEM, so that pleasing you will bless, enlarge and enrich their own lives.  That is how my parents raised me, and it has been what I tried to do with my own children.  A day does not pass in which I am not mindful of all that I owe to my parents, and I still want to live a life that would make Ben and Eva Jones proud.”

Todd says he loved being a kid, but adds, “I have loved every age, as each age and stage of life has its blessings, its challenges and its joys.  I also probably have remained something of a little boy on the inside all my life.  I love the person who said that ‘The art of aging is to stay young all of your days.'”

Todd reads history, biography, and fiction on those rainy days when he and Connie aren’t walking in the park.  Today, he reflects on David Pietrusza’s 1920: The Year of the Six Presidents.

From Todd:   If you are someone who loves American history, you will love Pietrusza’s well-told saga of the 1920 presidential race and the six former or future Presidents who played important roles in this story.  If you are someone who doesn’t like history, but wish you did, this is a book with your name on it, for it is history with a human face.  Pietrusza, biographer of Calvin Coolidge, tells the story of the 1920 election, but does it by sharing the lives of six men who either had been or would one day be President. 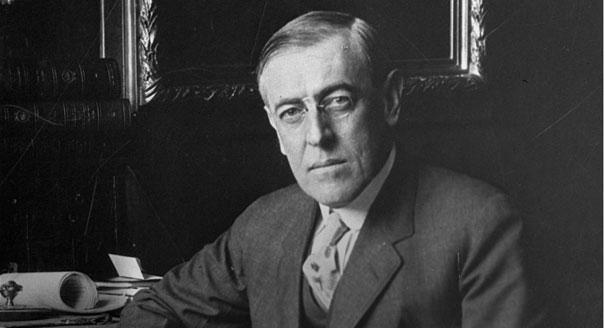 Woodrow Wilson was President, but had become an invalid through two serious strokes.  He was a discouraged, beaten man by the defeat in Congress of his dream, the League of Nations.  The vision for the League won Wilson the Nobel Peace Prize, but he could not win congressional support of America’s entry.  I should admit here that while I am a great admirer of Wilson, Pietrusza is not.  He reveals (accurately) most of Wilson’s faults and failures, and I still loved the book.  Teddy Roosevelt, who died in 1919, was still very much a part of the 1920 presidential campaign. “The Rough Rider” lost both his mother and his first wife on the same day as a young father in 1884, and went on to become the youngest man ever to be President.  Teddy decided not to seek reelection in 1908, and his chosen successor, William Howard Taft, won.  Ironically, Taft never wanted to be President, his dream being to serve on the Supreme Court.  The day the Wilsons came to the White House for the inauguration in 1912, Taft said, “This is the loneliest house in the world.”  Years later, as Supreme Court Justice, appointed by Warren G. Harding in 1921, Taft said, “I have forgotten that I was ever President.”

Roosevelt was the odds-on-favorite to regain the White House in 1920, and his death opened the field.  Emerging from the chaos were two Ohioans, Governor James Cox and U.S. Senator Warren G. Harding.  Both parties courted Herbert Hoover for the Vice Presidency, as Hoover had built a sterling reputation feeding starving Europe in the wake of World War I devastation.  Hoover would accept a cabinet post from Harding, and become President himself in 1928.  Hoover could not have had worse timing, taking office just in time for the 1929 stock market crash and the Great Depression.  Years later, he would redeem himself as an emissary of Democratic President Harry S. Truman and leader of the Hoover Commission.

Cox’s running mate on the Democratic ticket was Wilson’s young, attractive Assistant Secretary of the Navy, Franklin Delano Roosevelt.  He wasdescribed by the press as “an Adonis of a man,” though a year later he would be rendered a paraplegic by polio.  What no one knew of Roosevelt at this time was that the fifth-cousin of Teddy Roosevelt, married to his niece, was carrying on an affair with Lucy Mercer, who would be with him in Warm Springs, Georgia the day he died in 1945.  Roosevelt became a household name through his landslide loss to Harding in 1920, paving the way for his unmatched four victorious presidential campaigns.

Harding had his own preferences for Vice President, but the Republican convention surprised everyone by spontaneously nominating the Vermont-born Governor of Massachusetts, Calvin Coolidge.  Harding ran a front-porch campaign, outspent his Democratic opponent 4 to 1, and ran under the slogan, “Return to Normalcy.”  It was a reference to Wilson’s internationalist notions of America’s growing role in shaping a new world, and promised a return to isolationism and attention to matters at home.  What Harding did not reveal was that “normalcy” for him included an ongoing affair with his next door neighbor and an illegitimate daughter with another mistress.  Harding made some brilliant cabinet appointments, but he also surrounded himself with his friends, who may have shared his own lack of integrity.  After the Teapot Dome scandal broke, and he was fighting to redeem his presidency, he said, “My God, this is a hell of a job.  I have no trouble with my enemies.  But my damn friends…my goddamn friends…They’re the ones that keep me walking the floors at night!” 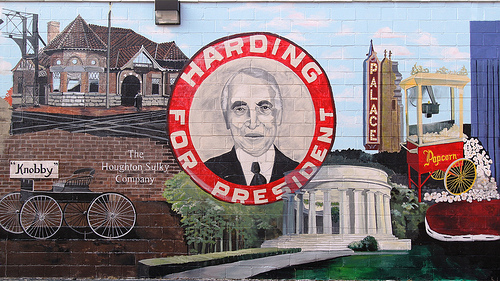 Harding’s inauguration was the first in which electrical amplification was used.  He spoke for forty minutes.  His own party thought his remarks fine.  Democrats hated his speech, and H. L. Mencken, the Bard of Baltimore, sputtered, “It reminds me of a string of wet sponges; it reminds me of tattered washing on the line; it reminds me of stale bean soup, of college yells, of dogs barking idiotically through endless nights.  It is so bad that a sort of grandeur creeps into it.”  One wag observed, “The amplifier is all very well, but what Harding needed was a condenser.”  Silent Cal spoke for ten minutes, the shortest inaugural address in history, and then was largely forgotten as Vice President for the next three years.

His presidency awash in scandal, Harding went on a western speaking tour to try to redeem it in 1923.  On that tour, he had an attack while in Seattle, and was taken the next day to a hospital in San Francisco.  He died there; to this day a death surrounded by mystery and speculation.  Hearing of Harding’s death while at his father’s home in Plymouth Notch, Vermont, Coolidge dressed, knelt by his bed in prayer, and at 1:10 A.M., took the oath of office administered by his Notary Public father.  Asked what was on his mind that night, 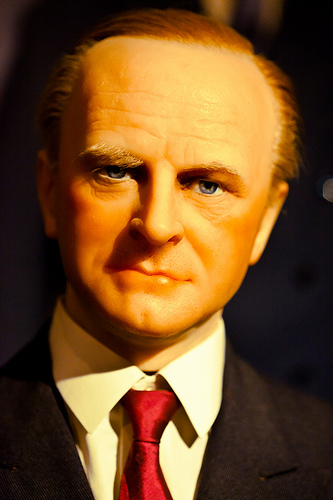 Coolidge answered, “I could swing it.”  Coolidge is the pleasant discovery of Pietrusza’s story, as Silent Cal was never a man to toot his own horn.  Humble, taciturn, honest and effective, he was the perfect reformer to follow the debacle of the Harding presidency.  After winning reelection in 1924, he decided at the end of the Roaring Twenties not to seek another term.  His wife Grace learned of this news when Calvin informed a group of elementary school children.

Set against the backdrop of women’s suffrage, prohibition, the open activity of the Ku Klux Klan and the emergence of America as a world industrial power, Pietrusza tells a fascinating story that will leave you glad that you took the ride.  Reading of our nation’s story always leaves me loving this imperfect land that DeToqueville called “The American Experiment.”  Let me close with Woodrow Wilson’s words to a crowd that gathered outside his home in D.C. close to the end of his life.  “I am not one of those who have the least anxiety about the triumph of the principles I have stood for,” he said. “I have seen fools resist Providence before, and I have seen their destruction, as will come upon them again, utter destruction and contempt.  That we shall prevail is as sure as that God reigns.”  Who doesn’t want to believe in such a future?