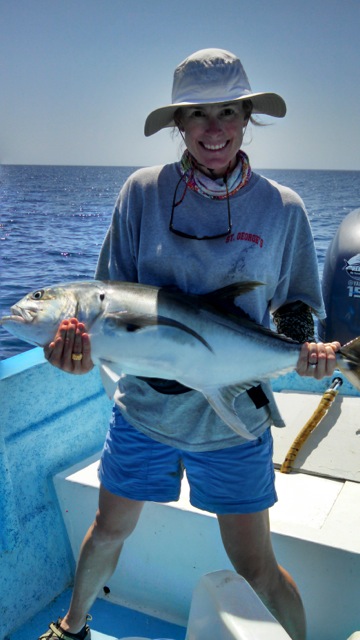 Regular Bacon contributor Elizabeth Lamar is just back from a family fishing trip to the east cape of the Baja peninsula in Mexico, “a great family destination… IF your family likes to fish just about every day,” she says, laughing.  A strong and skillful fisherwoman, Elizabeth secured a striped marlin!  She also secured a few minutes for reading, and today she shares her thoughts on All The Light We Cannot See, by Anthony Doerr.  For Elizabeth’s bio and prior post, please click here.

Werner lives with his sister in an orphanage in a German mining town where every boy is destined to spend his short life in the mines where Werner’s father died.  His fascination and talent with radios from an early age brings him to the attention of the local Nazi officials.  Joining their ranks offers him an escape from all he fears in the mines.

Marie-Laure lives with her father in Paris.  As a child she suddenly loses her vision and becomes dependent on her father, the keeper of keys at a Parisian Natural History museum.  As war becomes imminent, Marie-Laure and her father are forced to leave Paris and head to the coastal town of Saint-Malo.

The book has you leaning in toward the time when their paths will predictably cross.  They do cross, but there is nothing predictable or canned about the meeting or what comes after.

What It’s Really About:  This book is about so much more than that brief summary.  Doerr sheds light on the nature of propaganda, the state of affairs in Germany that might lead a nation of rational people to follow Hitler and the nature of war.  He also brings our attention to the importance of literature and art.  In the end, the story is a celebration of hope and resilience.

Note About the Author:  Doerr has received so many positive reviews for this book that I didn’t have time to read them all.  Here is just one sample.  USA Today has this to say:

Few authors can so gently – yet so resolutely – pull readers into such deep understanding of and connection with their characters.  Each and every person in this finely spun assemblage is distinct and true.  All, even the most heroic and likeable, are flawed in some way, as real people are (and people in novels often are not).  Most are utterly unforgettable, long after the last page has been turned.

Doerr is also an award-winning short story writer.  I haven’t really gotten into short stories in the past, but Doerr’s writing is so good that I want to pick up a copy of Memory Wall.

Fun and Effective Style Choice:  Doerr uses the technique of alternating his chapters between Werner’s and Marie-Laure’s points of view.  This change of perspective is especially effective because it underlines the differences and similarities between the two characters.  Werner is a part of the Nazi threat and Marie-Laure is a target, but fundamentally they are more similar than different.

You Will Love This Book If:  You like historical fiction, beautiful writing or just a plain old good story.

You Will Find This Book Annoying If:  You don’t like long books.

Radio: it ties a million ears to a single mouth.  Out of loudspeakers all around Zollverein, the staccato voice of the Reich grows like some imperturbable tree; its subjects leaning toward its branches as if toward the lips of God.  And when God stops whispering, they become desperate for someone who can put things right.