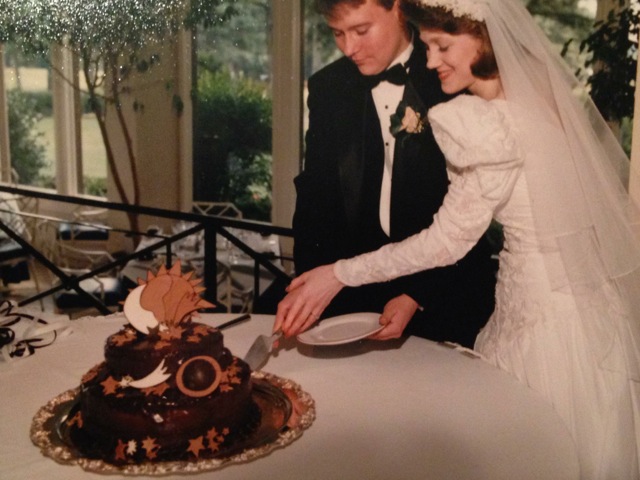 Regular Bacon Contributor Patricia Eastwood keeps her feet on the ground, but she’s always got her eyes on the sky.  When she and Larry were married, the groom’s cake (made by the pastry chef at the Atlanta Athletic Club) featured all of the planets in the solar system.  After 20 years of marriage, they’re still gazing at the stars together!  They recently visited one of their favorite vacation spots – Natural Bridges National Park in southern Utah – the first ever designated International Dark Sky Park.  (For Patricia’s bio and prior post, please click here.)

Patricia is the perfect person to share her thoughts on Neil Armstrong: A Life of Flight, by Jay Barbree, and I am grateful!

From Patricia:  The first book I ever read about space travel was The Right Stuff by Tom Wolfe.  My grandmother was a lover of historical fiction, and her copy of this wonderful book was on top of a pile of similar books, probably including John Jake’s North and South and Colleen McCullough’s The Thornbirds.  Once I found it, I could not put it down.  I recognized, even then, that there was an art to weaving together history and storytelling.  And, even though a few people might argue Wolfe’s book about man’s desire to travel into space was more fact than fiction, as I read Jay Barbree’s new book Neil Armstrong: A Life of Flight, it is clearer to me than ever the distinction between excellent storytelling and an excellent telling of what happened.

Barbree’s book is an excellent telling of what happened, specifically what happened when Neil Armstrong intersected with the space program of the United States.  Jay

Barbree’s official biography and his new book detail his fifty-plus years of friendship with Neil Armstrong, along with his extensive, dedicated reporting on the United States space program and space-related topics.  In addition to the new biography of Armstrong, Barbree has written seven other books on space flight.  He is also the only reporter who has covered every manned space flight launched by NASA.  His deep knowledge about the U.S. space program and the technological and political workings required to put man in space provide an unparalleled platform upon which to view one of history’s greatest heroes, Armstrong.  From his lofty perspective, Barbree meticulously details Armstrong’s entry into the Navy, his time as test pilot, and his subsequent move into the role of a Gemini astronaut and all that would follow.

A serious observer and student of the space program should read this book in order to see all that one of history’s most important writers about the space program is willing to report.  I say “willing” to report, because it’s clear that Barbree is not willing to say anything unflattering about Neil Armstrong.  He is unashamed about it and directly addresses any reader disappointment at his decision to report in this one-sided fashion.  He simply explains that in exchange for the gift of access to the astronauts, he promised them that he would only report that which they would approve of him reporting.  All of the flattering anecdotes he does report are well-documented and some feel quite personal.  The only other book that I can compare in style to Barbree’s treatment of his historical subject is Barbara Bush’s memoir written as she left her role as first lady.  As she said in her forward to that book, to paraphrase, her editor asked that she keep the “close friend” designations down to one per page, since “nobody has that many close friends.”  I found myself wishing for similar editorial advice for Barbree’s examples of Armstrong’s humble and self-deprecating nature, especially since they were not balanced with any examples of his human nature.

I finished the book with a wonderful appreciation for Armstrong’s strength of character and self-awareness of his role in history, but with not many clues about how he related to others, particularly those he loved.  Was there any pressure to being an astronaut?  I was also hoping to know more about how space travel affected Armstrong’s view of life and of God throughout the course of his life.  But then, this book is not a tabloid.  Given that Barbree was one of Armstrong’s closest friends and is one of the last remaining persons on earth who was close to all of the astronauts, I felt a little sad knowing that I will likely never learn more about Armstrong than what Barbree has written in his book, even though his book is an achievement in reporting.

Finally, I suggest that Neil Armstrong: A Life of Flight is, on some level, as much a story about Barbree’s career as a journalist and journalism as a discipline as it is a book about space flight or Neil Armstrong.  Barbree is incredibly careful to draw the distinction between journalism – a craft he has practiced meticulously – and everything else written about the space program; he specifically mentions The Right Stuff in describing the “everything else.”  Just as All the President’s Men demonstrates the importance of a journalist’s ability to build allies and trusted sources, Barbree’s description of his access to the astronauts, their families, and all others involved with the U.S. space program lifts up his book as a work of historical importance in illustrating the differences between journalism of the past and present.  The crisp picture Barbree paints using his sources stands in stark contrast to the “soft shading” reporting we generally receive from most news outlets these days.  For that reason alone, I urge readers to pick up the book and simply enjoy seeing what type of journalism project emerges from a lifetime of building sources – it is amazing.  Next up for me, a reread of The Right Stuff, so I can go from pure celebrating back to romanticizing the space program and the people – perfect and imperfect – who invented and lived it.