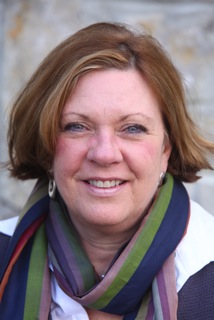 Nicki Pendleton Wood has found the sweet spot:  she’s a smart and enthusiastic foodie without being a snob.  That’s not to say she doesn’t have strong opinions!   Breakfast food in particular brings out her inner critic:  “even the words make me cringe!  On the other hand, even a poorly made Manhattan hits the spot.”  Today, she brings BaconOnTheBookshelf into the kitchen with a terrific review of Cornbread Nation 7.

Nicki grew up in Nashville, as did her “bestie” and husband, Tom Wood.  They’re amused to see the rest of the country discover the city’s appeal.  “As college friends left for Philly and New York after graduation, I didn’t get it,” she says.  “Nashville had everything – parks, clubs, music, culture, art, water, downtown, suburbs and lots of jobs.  Nashville has more than its share of astonishingly accomplished people.  I’m trying to meet them all.”

Nicki is happiest on a bike or a hike or with a hand of cards.  She doesn’t mind too much that daughter Eloise regularly beats her at hearts and spades.  She recently fell in love with a vintage Password board game that a friend picked up at an estate sale.  “It’s so hard!  Much harder than the iPhone version.  People were smart in a different way back then,” she thinks.  Nicki loves to find a good book, but will abandon without hesitation a book she’s not enjoying, “probably half a dozen so far this year.”  She’s decisive that way.

Nicki has written about food for the Nashville Scene and other publications for many years.  She blogs at The Project

Kitchen and has recently written a cookbook herself, Southern Cooking for Company, due out (Thomas Nelson publishing) in 2015.  It’s gorgeous!  Check it out at Facebook or on her Pinterest board.  Here’s how she describes it:  “Southern Cooking for Company is all about collecting Southern recipes and hosting ideas and tips.  More people are cooking Southern food than ever, and the South is more diverse than ever.  Perhaps it’s no surprise, then, that the recipe collection includes innovative dishes, including Green Tomato Pakoras, Ham with Spiced Cracklin, Pear and Ginger Jack cocktail, Sweet Potato Picadillo, Pork Kebabs with Green Chutney, Moon Pie Banana Pudding Shots, Buffalo Chicken on Blue Cheese Biscuits, and Lemon Guacamole.”

If you want to give one of her recipes a try, a good place to start is the famous coconut cake which – coincidentally – is the same coconut cake that began the 20-year quest written up in Cornbread Nation.

Today, Nicki shares her thoughts on Volume 7 of that estimable series:

Ancient doors along the lanes in Charleston and Savannah, swayback porch doors in Appalachia, floor upon floor of apartment doors – I’ve wondered as long as I can remember what kind of life goes on behind all those doors.

One thing is certain: every one of those houses has a kitchen, and every kitchen has a story.  Cornbread Nation 7 (Southern Foodways Alliance & University of Georgia Press) delivers 44 dispatches from behind Southern kitchen doors.

That includes doors that wouldn’t typically occur to you as Southern: Jewish delis in Miami, strip malls in Asheville North Carolina, cafeteria doors in West Virginia.  This volume of writings embraces Southern food experiences from the coast to the uplands to the bayou, including a 20-year quest for the perfect coconut cake; a live oyster on a mad road trip; and a boy hunter accidentally killing his first dove.

The writers represented in Cornbread Nation 7 are a combination of scribes you know and Southerners you’d never expect.  New Yorker writer Susan Orlean (Blue Crush, Adaptation) has a longform piece on a Cuban restaurant in Miami that fondly recalls Havana, even as its patrons gradually become American.  Julia Reed’s short “The Great Leveler” is a meditation on the South’s love of low-brow food, written in crackling prose with sly humor:

“Southerners who put sugar in cornbread are either impostors, or criminals, or both. …..[This] does not mean I’m a purist.  I love ‘Mexican Cornbread,’ which…does not come from anywhere near Mexico but from a cookbook called Bayou Cuisine…”

Cornbread Nation 7 is edited by Frances Lam, himself a first-generation American and memorably the features editor of now-defunct gourmet web store Gilt Taste.  Lam includes Southern stories that Anglo editors might have missed, such as a short interview with an African cook in Richmond, Va. and a chat with Lebanese Mississipians prepping a Lebanese dinner for 500 at their church.

Lam takes on the ever-present issues simmering below the surface of the South: race, ethnicity and class.  In “The Brixton,” a black D.C. resident parses his complex feelings as gentrified bars and white people move into his “chocolate city.”  Barry Estabrook’s “The Price of Tomatoes” is a short visit to the shadowy world of Latino tomato laborers he wrote about in his award-winning (and mortifying) book Tomatoland.

Rural Southerners will recognize their South in two ripping-good hunting stories, one of hand-catching frogs in Louisiana and another a wild and wooly unregulated hunt of feral pigs in Texas.

Whiskey, Ro-Tel dip, preserves and collard greens all get attention, the latter in a lovely short poem.  So do soul food, celebrity chefs and the South Side of Chicago.  There’s so much good writing here that it’s possible to get hooked even if you think you aren’t interested in the topic.

The best way to read Cornbread Nation 7 is to just select a piece, read a few paragraphs, and if it doesn’t grab you, move on.  With 44 to choose from, it’s likely some of them will open a door to a South that’s as unfamiliar and thrilling as a foreign country.

Cornbread Nation 7 and a few of the six preceding editions are available from the Nashville Public Library.  All can all be bought on Amazon.