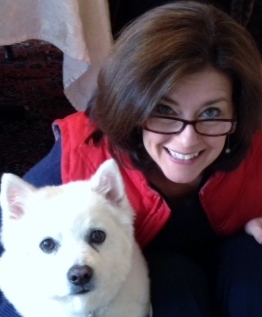 My friend Elizabeth makes me think of that famous fairy tale character with hair dark as ebony and skin white as snow.  In some ways, she’s lived a fairy tale: she was the little girl who became a ballerina.  With Nashville Ballet, she danced the roles of the Sugar Plum Fairy (in The Nutcracker) and Cinderella, among many others, and “was known for her exquisite beauty and attention to detail in balletic roles,” says Paul Vasterling, CEO and Artistic Director of Nashville Ballet.  She married her prince and then – in a new twist on the old story – got her law degree, graduating third in her class.

Fairy tales are famous for ending happily ever after, but there’s a lot of worry along the way.  Elizabeth’s had some challenges lately too.  Today she answers two questions for me – What do you worry about, and how do you relax?  The post ends with her thoughtful review of a book she loved, Delicious!, by Ruth Reichl.

Currently, my top source of worry is my parents.  They have just moved from Decatur, Georgia (their home for over 40 years) to a nursing home in Nashville. They are in what I call the “elderly toddler” phase of their lives.  I use “toddler” in the sense that my parents are precious beings whom I love, and whom my brothers, husband and I feel privileged to protect and care for.  Like young toddlers, they need things explained to them, often the same things repetitively, and their feelings are easily hurt.  Things that seem small to me can take on outsize significance to them, and they can get into some innocent mischief.

My parents have gradually relinquished many activities and decisions in their lives, handing over or abandoning them to my two brothers and me.  The “elderly” component adds several layers of sadness and risk to the general toddler state.  Unlike young children who are on an upward trending continuum of exploration and growth, my parents are experiencing a steady, unpredictable, decline in abilities, awareness and general quality of life.  It is beyond heartbreaking to watch these smart, strong people lose their ability to walk, speak, and read.

This is a time to focus on what my parents did well and to remember the successes of their lives.  One thing my parents did exceptionally well was to be willing to grow beyond their experiences while they nurtured three children with very different interests from their own.  My parents grew up in a city, and neither of them appears to have been particularly athletic.  They had children who were passionate about soccer, martial arts and ballet.  One of my brothers became determined to be a Navy SEAL, the other was an avid soccer player, and I decided I had to make a career of ballet.  Although all of these pursuits were foreign to my parents, they encouraged us and learned with us.

How do you relax? 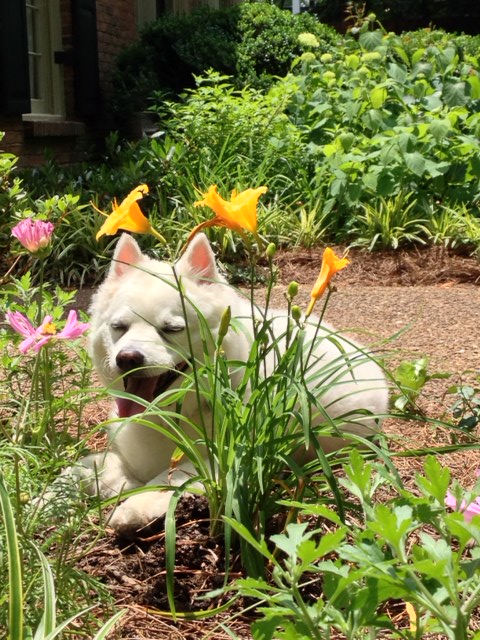 My husband and I are the “parents” of two beautiful American Eskimo Spitz dogs, Max and Dutch.  Max has shown me the immense value and comfort of ritual in our daily life.  Max joined our household as a six-week-old puppy on September 3, 2001.  Somewhere in that first year, we began giving him a “Greenie” each morning after the first trip outdoors.  He soon began to race to that cupboard as we returned to the kitchen and would sit politely, then stand up on his back legs and turn a little circle of joy as I handed him the tooth-cleaning treat.  Thirteen years and several knee surgeries later, he can no longer manage even a polite sit, but his eyes shine and he smiles eagerly as we begin the day the same way we always have.

Dutch, who joined us eighteen months after Max, has a great talent for celebrating life physically and vocally.  Dutch finds joy in rolling on his back in the grass while giving a purr-like series of repetitive “errr” sounds.  He greets us by running to the door and proclaiming, “Woo, woo, woooo!” after even a brief absence, and loves to bask in the sunshine for just a few minutes in the middle of the busiest day.  He is a constant reminder that our world is full of delight.

I love to garden, and I also love Bench-time, which is another ritual Max and Dutch created for my husband and me over time.  Bench-time involves sitting outside at the end of the day and simply enjoying the fresh air.  We sit on benches placed on the dead-end curve of our street and the dogs lie on the grass at our feet.  It is a great place to enjoy the view of not only my own garden, but those of my neighbors as well.  Sometimes Bench-time includes friends, neighbors, and other dogs; sometimes it is just us.  It can involve a glass of wine and elaborate snacks, or just a quick few minutes without refreshments.  Bench-time is a ritual that began for the dogs, but has evolved into an important part of the day for the people as well.

Ruth Reichl was the editor-in-chief of Gourmet magazine for ten years.  She has been a restaurant critic and food editor, cook and co-owner of a collective restaurant, and is the author of several critically acclaimed non-fiction books.  Her debut novel, Delicious!, published in May, was the subject of much negative criticism in the press.  When I read the novel, I was unaware of the criticism and simply enjoyed Delicious! as a delightful story, loosely organized in the archetype of the hero’s quest.  Reichl is an accomplished writer who moves her story along quickly by placing the reader directly into active scenes filled with scents, flavors and rich visual details.  She writes in the voice of a twenty-one-year-old woman who is coming to terms with a mysterious event in her past while trying to construct a positive future.  There is a certain amount of melodrama inherent in the situation.

Reichl’s hero is Billie Breslin, a Californian who drops out of college two weeks before the start of her senior year and moves to New York City in pursuit of a job as assistant to the editor of a food magazine called Delicious!  Reichl introduces Billie in a brief opening chapter depicting a ten-year-old Billie helping her older sister, Genie, and their Aunt Melba as the three of them attempt to recreate a gingerbread cake Billie’s deceased mother used to make.  We learn that Billie has inherited her mother’s gift for identifying spices by their scent, an attribute her beautiful and successful older sister has not inherited.  Although this talent is presented as a gift in the fairy tale sense, Billie understands it must be nurtured with practice and training.

We next meet Billie in the first of many tests Reichl has devised for her.  Jake Newberry, the editor of Delicious!, insists that she must cook something for him as part of her interview.  She overcomes a severe panic attack and triumphs by producing the gingerbread cake.  Once Billie has the job, Reichl devotes the first section of the book to establishing a warm community reminiscent of a small town for Billie to inhabit in the middle of New York City circa 2009-2010.  Billie’s extraordinary palate allows her quick entry into the food world of downtown New York.  This requires some suspension of disbelief on the part of the reader, but it makes for a very cozy feeling that Billie has found her niche.

With a supporting cast of interesting characters, Billie endures increasingly inventive tests by her employer and finds a surrogate family in her weekend job working in a century old cheese shop in Little Italy.  Just before Billie’s second Thanksgiving in New York, the Delicious! employees are blindsided by the news that the magazine must close.  Because the publisher has offered a money-back guarantee on the outcome of recipes since 1910, Billie remains employed to correspond with complaining readers who write in to claim a refund.

While searching for an ancient recipe in the library of the magazine’s elaborate Greenwich Village mansion, Billie and a friend discover letters to James Beard from Lulu Swan, a twelve-year-old novice cook living in Akron, Ohio in 1942.  Lulu’s father is a pilot fighting in Europe and her mother is working at the Goodyear airplane factory.  A past librarian has filed Lulu’s letters using a complicated system of clues, so Billie must embark on a quest to find all of the letters against the time pressure of the inevitable sale of the mansion.  This section of the book is delightful and poignant.  Lulu writes of her struggles to produce meals for her mother from wartime rations, the threadbare quality of life without her father, and her reaction to anti-Italian prejudice.  Reichl weaves the story of Billie’s search for the letters together with World War II history and a gradual transformation for Billie.

The second and third sections of the book involve revelations and resolutions for both Billie and Lulu.  Without giving anything away, I can tell you that there are elements of personal style, architectural history, family history, and more than one love story.  Although some of the revelations are predictable, they all come with twists and an undercurrent of feeling that none of us truly knows even the people we are closest to.  Reichl manages to keep many balls in the air at the same time in terms of plot, bringing some of the complications of real life to the story.