Picture a luscious, grown-up Goldilocks and you’ve got a starting point for Karlen Garrard.  Her thick golden curls are always beautifully coiffed – or pulled back – and she has a vibrant curiosity and sweetness that I find a rare combination.  Karlen isn’t too this or too that; she’s just right.

Karlen came to Vanderbilt in 1985 and has never left, except for a two year jaunt in New Orleans for husband Louis’s medical training.  They enjoyed all the delicious cuisine the city has to offer, given their budget and his schedule; she makes a mean shrimp and grits.  She absolutely loves oysters and crawfish.  “We have a tradition of going to South Street for Mother’s Day – it’s an amazing feast of crustaceans,” she says.

Walking their two dogs, Chester and Dorie, keeps her on the move. She especially enjoys taking them to the Warner Parks trails.  Chester and Dorie are exceptionally high maintenance, she says, “since I treat them like humans.”

They’ll be sad when she’s away next week – in Copenhagen! – visiting son Ford, a junior at Carolina, studying abroad this year.  Son Paul is a freshman at Vanderbilt, and daughter Frances is a freshman at Ensworth High School.  With the two boys away and Frances happily busy, Karlen recently joined Lucy Haynes and Jane Corcoran as a sales associate for Worth New York, a personalized luxury clothing line.

She’s also taken on a big project – the Symphony Ball – co-chairing it with Anne Maradik.  This year’s 30th anniversary Ball will be held December 13th at the Schermerhorn and promises to be a lovely celebration and fundraiser, featuring performances by Nashville’s Symphony plus long-time Symphony supporters Faith Hill and Tim McGraw.  If you find yourself in a room with Karlen and a piano – by the way – you must ask her to play!

When she’s not dealing with the dogs or the Symphony, she loves to read, mostly fiction, and is the source of some of my favorite reads.  Today, she shares her thoughts on a book she can’t get off her mind, A Fine Balance, by Rohinton Mistry. 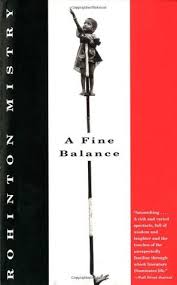 I admittedly have a thing for sad books.  I’m not talking about The Notebook, or Old Yeller, unabashed tear-jerkers that they are.  I’m talking books that settle into my deepest sense of sorrow and fear, books that disturb me, books that expose injustice, suffering and human cruelty.  These are the books that stay with me for a long, long time, perhaps because they give such sharp contrast to the trendy obsession with happiness in our contemporary culture.

Of course, there are abundant self-help books which extol the pursuit of happiness, such as Gretchen Rubin’s The Happiness Project, a whiny, self-absorbed counsel for which I have mild disdain.  Rubin, a bored 30-something Manhattan hedge-fund wife gives loads of advice: Collect something – like bluebirds!  Organize your birthday cards into file-folders!  Get plenty of sleep!  Thanks, Gretchen, but life is really, really sad sometimes, bluebirds or not.

Great novels, often the devastatingly sad ones, put us in touch with our deep capacity for compassion.  They connect to our humanity through our shared brokenness, fears, grief, and despair.  Their prose simultaneously illuminates friendship, love and generosity – indeed a balancing act of a fine author.

Rohinton Mistry’s A Fine Balance is a sweeping novel of India, with larger-than-life renderings of chaos, destruction and despair.  It’s a crushingly sad book, but one I often refer to as a life-changing.

At once heart-breaking and heart-warming, vast and intimate, A Fine Balance weaves together the lives of four unforgettable characters in an unnamed city in India during the State of Emergency, a 19-month period of Indian history beginning in 1975.  During this time of great social and political unrest, the world’s largest democracy was converted into a dictatorship.  Rule by decree was implemented by the ruthless Prime Minister (unidentified in the book, but presumably Indira Gandhi).  Civil liberties and elections were suspended, press was heavily censored.  The rights of citizens were repealed.  This bleak era was marked by the random cruelty of the caste system, relentless poverty, and government-issued atrocities, such as forced mass sterilizations and tens of thousands of arrests without trials.

Amid this turmoil, four strangers are brought together, their backgrounds as discordantly piquant as the spices in a Dal Biryani.  We meet Dina, a strong-willed Parsi widow, two hapless Hindu tailors, Ishvar and Om, and an idealistic student, Maneck, all struggling to survive.  Dina’s cramped apartment becomes a home for this ramshackle family, and a refuge from the storm of violence and chaos that befalls them.  These dear characters endure catastrophic loss.  There is poverty, castration, amputation, homelessness, imprisonment, all against the backdrop of a supporting cast of characters – beggarmasters, corrupt rental agents, child circus performers – who are hyperbolically Dickensian in their wretchedness.  Yet the novel’s expectant heartbeat thumps along, casting the reader into a spell of rapt prayerfulness.  Mistry writes, “If there was an abundance of misery in the world, there was also sufficient joy, yes – as long as one knew where to look for it.”

Catharsis, in the old-fashioned, Aristolelian sense, is what we long for in A Fine Balance (although some would argue that the novel’s bleakness never abates).  In the tale of Dina, Ishvar, Om and Maneck’s dramatic suffering, this powerful epic stirs up emotions you’d just as soon ignore.  The age-old dramatic/literary device is alive and well in the tragedies that befall our beloved foursome.  Despite their pain we feel for these characters, we are strangely renewed by their resilience and gratitude, despite the worst of situations.

Egad, in considering Greek catharsis – unashamedly via Wikipedia visits – I happened to find myself cursorily perusing Aristotle’s Nicomachian Ethics, and his discourse on the pursuit of happiness.  (And to be fair, our happiness guru, Gretchen Rubin also tries her hand at a naïve exploration of Aristotelian philosophy).  It occurred to me that these Greek concepts – catharsis, happiness – must be somehow tied together.  As Aristotle expounds, happiness, though not a discrete virtue in itself, can be achieved only by striving for the Golden Mean, a balance of all the virtues and vices.  The excesses – pain/pleasure, strife/humdrum, rashness/cowardice, avarice/munifience – must find middle ground.  This philosophy seems oddly resonant in Mistry’s musing, “You have to maintain a balance between hope and despair.  In the end it’s all a question of balance.”

Sad, sad books jolt me into an awareness of the pathos in humanity.  Don’t turn away from them because they evoke painful emotions.  Some morose favorites of mine include Cormac McCarthy’s The Road, Marcus Zusaks’ The Book Thief, Kazuo Ishiguro’s Never Let Me Go, and most recently, Jesmyn Ward’s Salvage the Bones.  These novels share a stark, dystopian quality in their renderings of horrific and oppressive situations.  Happy, they are not.  A Fine Balance is perhaps the saddest of them all, but its unsettling saga celebrates self-sacrifice, joy and hope in an unforgettable eulogy.  Read this woeful tale; heed the wisdom of Marcel Proust: “Happiness is beneficial for the body, but it is grief that develops the powers of the mind.”

Don’t wish me happiness
I don’t expect to be happy all the time…
It’s gotten beyond that somehow.
Wish me courage and strength and a sense of humor.
I will need them all.