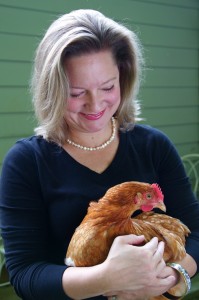 Carrington Fox is a fearless urban farmer with a microflock of chickens by day, a renowned food writer for the Nashville Scene by night.  She’s just “Mom” to three sons ages eight, nine, and eleven, all attending University School of Nashville.  You may have seen her at Artclectic, USN’s major art show and fundraiser, which she recently co-chaired for the second year in a row.  We all may be getting to know her quite well in the years to come:  she’s also the wife of exciting mayoral candidate David Fox.

If you’d like to know Carrington better right now, check out her marvelous blog and collection of recent Nashville Scene articles at Carringtonfoxauthor.com.  She recounts with great wit various adventures in her own kitchen and in Nashville’s hot new restaurants.  One of my favorite episodes involves her foray into kombucha production:

Like so many paths to hell, my road to kombucha addiction was paved with good intentions.  I started hanging out with some cool girls.  They grew vegetables and raised chickens.  They composted and crafted.  I wanted them to like me.  When one of them led me to her pantry and lifted the cheesecloth from a vintage wide-mouth candy jar of aging kombucha – a beverage hailed for its dubious immune-boosting properties – I recoiled… but I wanted to fit in.  I took a sip.  I tried not to inhale.  Soon I was breaking bad with my own kombucha operation.

When she’s not breaking bad in her home lab, you might find her sipping a Belle Meade Bourbon.  “My brother and nephews have just revived the brand,” she says, “which my great-great grandfather produced when he came to Nashville in the 1800’s.  Having a bottle in the house makes me feel like part of a longer story.” 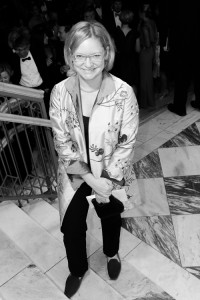 Don’t let me give you the wrong impression!  Carrington is one of the healthiest and most balanced individuals you’re likely to meet.  She’d rather be shopping an estate sale on a Friday morning – her favorite guilty pleasure – than indulging in a shot of bourbon or anything else.  If I had to describe her in one word, I’d say that Carrington is “thriving,” in every regard.  She attributes this in part to a wonderful childhood in Nashville:  “Happy is an understatement for my life on a dead-end street, in a house crowded with funny friends, loyal neighbors, weird pets and parents who loved me and my brother beyond imagining.  I’m pretty much trying to recreate it for my own kids, two blocks from where I grew up.”

Today, Carrington describes what she learned reading scripts for the nearly brand-new Nashville Film Festival Screenwriting Competition.  There’s still time to submit your screenplay:  the deadline for the second annual competition is not until January!  To learn how her experience as a script reader changed her life (or at least her writing), read on…

Next time you’re watching a movie and you get that sinking feeling it’s not really going anywhere, check the time.  You’re about 30 minutes in, right?

It’s not just because you’ve hit rock bottom in the popcorn tub that you’re antsy and wondering if the Mall is still open.  It’s because moviegoers have high expectations for the first half-hour of a film.  In that window, we expect to identify a sympathetic character, an inciting event and a clear goal – be it love, life, liberty or lucre.

If you’re a film director, you’ve got about 30 minutes and all the cinematography, celebrities and soundtrack you can afford to win over an audience.  If you’re a script-writer, you’ve got just 30 pages of 12-point Courier font to woo your reader.

That’s the challenge in the second annual Nashville Film Festival Screenwriting Competition, which is accepting submissions until January 14, 2015.  Writers from around the world are invited to submit English-language feature-length and short scripts and teleplays, with a chance to be reviewed by top-level film industry professionals.

In last year’s inaugural NaFF script contest, more than 1,500 entries were submitted, and winning scripts were reviewed by industry superstars whose résumés include House of Cards; Black Swan; The Way, Way Back and more.  After such a blockbuster debut, organizers expect as many as 2,000 entries for the 2015 contest, with the majority coming in after New Year.

If we learned anything from watching eight seasons of Entourage, it’s that industry superstars won’t slog through 2,000 scripts.  They’ll step in to read only those submissions that survive early vetting.

So, you ask, who will triage the piles?

Contest boilerplate explains that, in early rounds, the job of scoring the first 30 pages falls to “trained NaFF script-readers.”

They could be you.  And when 1,000 scripts fly in over the transom in January, NaFF organizers would love to have your keen reading eyes on the team.

Last year, when I found myself at a creative standstill, unable to shove my fictional character one step farther along her narrative arc, I temporarily abandoned novel-writing in favor of script-reading.  With no credential other than a fondness for film, I attended a training workshop at NaFF’s office in the NPT building.  The hour-long bootcamp was a concise primer on what makes a good story, and the tutorial armed me with just enough confidence to answer these questions about a screenplay:

Is there a clear premise that drives a character toward a goal?

Do I care about that goal?

Do I care enough about that flawed character and all her quirks to ride shotgun on her journey?

Is there enough conflict and tension to keep the story interesting for two hours?

Is there action that can be translated to images?

Is it original, clever, relevant and resonant?

Does it make sense?

Finally, is it formatted correctly, with 12-point Courier font and present-tense descriptions of no more than four lines?

If the answer to this last question is yes, then a 30-page selection should represent 30 minutes of film and take about 30 minutes to read.

Last year, I read a pile of scripts.  More precisely, I read 30 pages of many scripts in a pile.  I read them on the treadmill, in the carpool.  In my socks, with a Fox.  I read TV pilots and feature films, comedies and tragedies.  I met characters ranging from a stowaway orphan living in a nursing home to middle-aged burnouts trying to get the band back together, dude.

I circled passages of crisp dialogue that made me cheer for the underdog, and I slashed through cringe-worthy monologues that made me root for the speaker’s demise.

I sorted into stacks of Yes and No, feeling alternately confident and guilty for pronouncing judgment on the creativity of strangers.  Who was I to judge their work?  After all, these writers had actually completed something, whereas I had abandoned my novel.

NaFF staff reassured me that every script got two early-round readers, with a third reader available for tiebreakers.  They also promised that I would know a really great script if I got one.  The more I read, the more I saw patterns in successful stories.  I became more confident in my evaluations.  I got tougher in my grading.

In the end, I did not discover the next Nora Ephron.  But I learned a lot about what makes her screenplays work.  When I reached the bottom of the script pile, I returned to my own writing with fresh eyes.  And while my efforts didn’t earn a coveted Gold Laminate to the 10-day Nashville Film Festival in April – for that you have to review 160 scripts – my crash course in storytelling forever changed the way I read, watch and write.