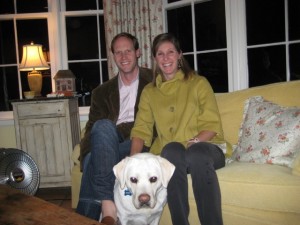 There’s nothing like a radiant young woman expecting a baby to remind you of life’s wonder and hope.  Elizabeth Sherrard exudes good health and good sense in addition to joyful anticipation.  She’s all grown up but still seems awfully young to me; I’m thinking of her as a little girl in farm clothes and mud boots with her trusty dog Frisky, “pretending that we were being chased by the ‘bad guys’ and running through fields and ditches trying to escape.  Not your typical imagination for a girl that age!”  Elizabeth grew up in Memphis but spent nearly every weekend at a family farm an hour outside the city.  “This place provided me some of my favorite childhood memories, my love for the outdoors and a sense of independence,” she says.  You can sense the spirit of the girl in the mother-to-be. 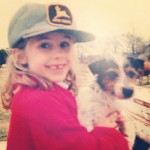 Elizabeth hasn’t run through any fields lately with her blond lab, Busy, but she and husband Tom do cater to Busy quite a lot.  “She rules the household at this point, and if anyone ever overheard the way Tom and I talk to her, it would be quite embarrassing,” she admits.  Busy’s life is about to be turned upside down when Baby arrives in December!

Elizabeth loves her work at the Nashville Public Library Foundation. “Fundraising is pretty easy when you are 100% behind what you are raising the money for, and that is how I feel about my job.  We impact children, teens and adults across the city of Nashville and we reach every socioeconomic sector.”  She is extremely proud of that.  Her twelve weeks in South Africa studying abroad had a profound effect on her sense of the world, especially her awareness of the disparity of wealth both there and closer to home.

She dreams of a trip to New Zealand one day to enjoy hiking, fly-fishing, and riding horses.  For the time being, though, she’s mostly dreaming of a pink nursery.  Today, she shares her thoughts on a wonderful book she’s read recently, The Signature of All Things, by Elizabeth Gilbert. 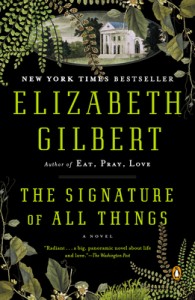 When people hear that I work for the Nashville Public Library Foundation, one of the first things I hear is “oh, I bet you can give me some great suggestions for our book club!” – not realizing that I am not, in fact, a Librarian.  I am a fundraiser, and while I love to read, I often can be found with the latest teen bestseller or chick-lit book that helps me unwind after a day at work.  Not what you would recommend to your in-law’s intellectual book club that just finished a rousing discussion of The Sun Also Rises.

When I was deciding what to write about for this post, and feeling like I should stay away from the second book in the Divergent trilogy so as not to embarrass myself in front of the millions of readers Bacon now has (note from Jennifer: not quite!), I decided to look for something that was thought-provoking but accessible.  Something to recommend to those who don’t have the time to focus on each word as they read in bed in the effort to turn off the day.  I found just that in Elizabeth Gilbert’s A Signature of All Things.

At first I was a little apprehensive about the focus on botany (I love the outdoors, but you lose me in discussions of self-pollination and the transmutation of mosses), but Gilbert draws you into the character of Alma Whitaker so that you begin to love this woman’s excitement over all things plants, and as the story takes shape over the 1800’s, you realize how fascinating her discoveries must have been during this time.

The novel begins with the story of Alma’s father, Henry Whitaker, a self-made botanist who after years of world travel settles in Philadelphia running a pharmaceutical plant empire.  His business success creates a life of comfort for his only biological daughter who looks up to her father and shares his intellect and interest in botany.

Alma’s comfortable yet lonely life is first rocked by the adoption of Prudence, a girl close to Alma’s age but with a very different demeanor.  The two girls have little in common and rarely speak.  Their only friend, Retta Snow, is the one person who brings them together, but when Retta announces that she is engaged to the man that Alma is in love with, their friendship falls apart.  Alma’s relationship with Prudence goes back to one of a stranger.  Prudence marries soon after, and Alma is once again alone on the family estate, resigned to being a spinster, fully immersed in her botanical studies for many years.

Alma’s life takes a new turn at the age of 48 when Ambrose Pike comes into her life.  An amazing artist of orchids, he lives in a spiritual world that Alma tries to understand, but to no avail.  This relationship propels Alma on a journey that encompasses hope, heartache, adventure and discovery, leaving Alma at the end of her life with a few regrets but also a sense of peace that took her a lifetime to unearth.

Elizabeth Gilbert artfully crafts this sweeping novel in such a way that I was fully invested in the characters and their journeys while almost accidentally learning about the botanical world and the scientific theories that were published during this time.  Her thorough character development allowed me to identify with many of the characters’ motivations and reactions, but she left enough mystery that I would stay up late into the night to see what paths they would choose.  The science that accompanies the story has challenged me to reflect upon and better appreciate the magnificence and mysteries of our world – something our generation is often too busy to spend time doing.