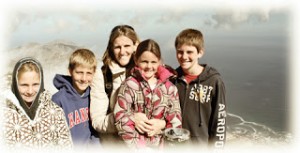 “If life always went exactly as planned, there would be no stories.  If you look at it that way, a crappy day can be the greatest gift,” writes Sine Thieme at her terrific blog, JoburgExpat, and I can just hear her smiling!  Sine is a cheerful chronicler who finds the humor in challenging and downright aggravating circumstances.  She honed this talent while navigating life in Johannesburg from 2010 to 2013 with a husband and four kids. “Overall, I’m happy to report that South Africa never felt like the most dangerous place in the world to live and that moving there wasn’t suicidal.  I won’t say it’s the safest place in the world either, but which place is?  Plus, there are some other pretty cool things South Africa has going for it, so you just have to take it as a whole package deal.” An expat no longer, she and her family have made Nashville home these last two years. 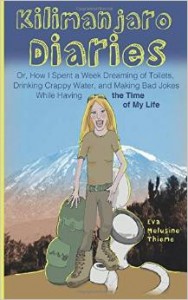 Born and raised in Germany, Sine is a woman who gets a lot of things done efficiently and well.  She admits that she loves loading the dishwasher to perfection – “often undoing someone else’s previous work.”  It drives her slightly crazy that she has to figure out for every other family member “why the printer, once again, isn’t working.”  When it comes right down to it, though, she admits that she’s the one who is good at figuring out why things don’t work.

Sine and her husband attended business school at a fine university in Chapel Hill, North Carolina, and she puts her skills to work each day juggling writing and family management.  She published a book last spring, Kilimanjaro Diaries (Bacon review here), and her blog has been a tremendous success – a million views and counting as of a few weeks ago.  She’s learned a lot about blogging over the last few years; she’s learned even more about parenting over the last seventeen.  To enjoy your teenagers, she says “you basically have to imagine that they are not YOUR teenagers at all but perhaps someone else’s lovely children who just dropped in for a spell.”  She finds it helpful to avoid rolling her eyes, nagging, judging, admonishing, or lecturing.  Her most important advice is to “Pick your battles.”  She loves the fact that parenthood keeps her on her toes.

She also loves: a cappuccino in the morning, a glass of South African chardonnay while making dinner, Lindt balls (“the red kind and lately, the new coconut flavor”), tennis, To Kill a Mockingbird, and a day alone at her house with no errands to run.  Today she shares some recollections of a German childhood and her thoughts on Kristin Hannah’s blockbuster World War II novel, The Nightingale.  Read to the end of Sine’s post for a chilling story from her father’s childhood during World War II.

I’m thrilled to write a review for Bacon.  I love this blog (thanks, Sine!), and I love the subject matter at hand – World War II, France, and the Resistance.

I’ve always been fascinated by WWII, perhaps because I grew up in Germany and was raised by parents who themselves grew up during World War II, right in the midst of things.  But do you think they shared much about it?  Very rarely.  This was infuriating and only served to make me more curious.  I wanted answers, particularly to the one question always nagging at my conscience: What would I have done in their shoes?

The reason they didn’t talk, I suppose, was mostly shame, the same collective guilt that still defines Germany to this day.  Even though my parents were too young to have altered the course of history, their own parents (my grandparents!) were old enough to do something.  And old enough to understand that doing nothing was also a form of doing.  But was doing nothing fueled by cowardice or the need to protect your own family?  Is there a difference? 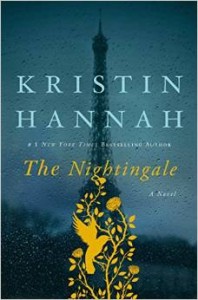 This is the very question at the center of The Nightingale by Kristin Hannah.  The story’s main protagonists are two French sisters, Vianne and Isabelle.  Vianne is raising her young daughter Sophie on her own, ever since her husband has been captured during the invasion of France in 1940, and is trying hard to cope with the deprivations brought on by harsh winters and ever stricter food rationing.  Her life in a sleepy town to the south of Tours (at the edges of Occupied France under Vichy rule) is complicated further when a German captain requisitions her house and takes up residence with them, and when it becomes clear that all the Jews around the country are being rounded up, including, one day, Vianne’s best friend and neighbor Rachel.

Isabelle, barely 19 years old, is Vianne’s opposite in many ways.  Instead of accepting the German occupation as the new normal and, like Vianne, trying to get by as best she can, she is impatient to help her country.  She is impulsive and reckless and many times in danger of getting everyone arrested when she snubs and insults every German she encounters, but eventually she finds her way into the Resistance, where here daring operations to smuggle downed Allied airmen out of the country right under the noses of the occupiers earn her admiration and respect.

Both sisters suffered the death of their mother and the subsequent abandonment by their father at a young age, but each has turned out very differently.  Vianne – cautious, hard-working, and rule-abiding – wants the world to return to how it was before the war and tries to navigate her new reality as best she can, one day at a time and without putting anyone in danger, even if it earns her no glory.  “Tante Isabelle would do something. You’re just afraid!” her daughter hurls at her one day when they witness the first Jewish shops in town being shut down.  “And what should I do?  Storm into the square and demand that Madame Fournier get her shop back?  And what would they do to me for that?  You’ve seen the posters in town,” retorts Vianne, and whispers: “They’re executing French people, Sophie. Executing them.”

As the war rages on, however, Vianne finds out that she has to make difficult choices, whether she wants to or not.  She slowly realizes that “as afraid as she was of risking Sophie’s life, she was suddenly more afraid of letting her daughter grow up in a world where good people did nothing to stop evil.”

Isabelle – young, impatient, and emotional – disdains people like her sister Vianne, who she feels are passively standing by while their country is raped, but as she engages in ever more dangerous and clandestine missions, her childish righteousness slowly gives way to ruthless cunning and a much more calculated – and effective – opposition to the hated occupiers and their French collaborators.

Vianne knows nothing of Isabelle’s work for the Resistance, instead suspecting her younger sister of continuing her irresponsible ways by conducting secretive love affairs.  Eventually, however, their two lives are bound to clash and this leads them both into ever more dangerous territory.

Both women are courageous in their own way, and you can’t help but wonder which one you might have been.  I felt great admiration for Isabelle and all she achieved and endured, but I was more drawn towards Vianne, as I’m rather cautious and reflexive myself, and as a result I found her character the more believable one.  You’ll have to read the book to decide for yourself.  And you’ll greatly enjoy it, because The Nightingale has all the elements of a good story: gripping, fast-paced, and a dose of forbidden love.  I admit that at first I was disappointed by the love story lines, as none of them pan out exactly the way you imagine and perhaps hope for, but after I put down the book I realized that it is about a different kind of love: the love of family, between sisters, between parents and children, and particularly the love that isn’t being returned or that may be returned only much, much later.  It’s about wanting to forget, and yet wanting to be remembered.

The atrocities that were committed – in France itself, and also in the concentration camps – were unspeakable, and I sometimes wonder that there was any Resistance at all, given the dangers.  To me, the main lesson of The Nightingale is this: each one of us has the capacity for extreme courage, but we will never know what we are capable of until we are put to the test.  Or, as the author says in the opening sentence (through Vianne as she is looking back on her life decades later): “In love we find out who we want to be; in war we find out who we are.”

And this brings me back to my own family.  As much as I would like there to be a story of heroics, the women in my family don’t seem to have been tested in quite the same way as Vianne.  They were afraid, and they chose to protect their families, nothing more and nothing less.  I finally got the desired glimpse into history when, shortly before his death, my father told me a story from his childhood that left me chilled to the bone:

It was the summer of 1944, June 4th to be exact.  I remember it so well because it was my 7th birthday.  My mother sent me down the street to Frau Schick‘s store, since we had run out of something or other.  It was one of those neighborhood shops crammed full with everything from bread and milk to hemp ropes.  Several older ladies were ahead of me, so I waited my turn.  One woman was eyeing a display of hats, circling them slowly, touching here and there to test the material.

“I wouldn’t buy one of those if I were you,” Frau Schick warned and stepped out from behind the counter.

“Why not?” asked the woman.

”They are said to be made from Jew hair,” whispered Frau Schick, glancing around furtively. “You know, from the concentration camps, the ones in the east.”

The woman quickly took a few steps back, as if she had been burned, and went on with her shopping.  When it was my turn, I paid and ran home.  I was scolded for staying out so long.  So I told them I’d had to wait, and what I’d heard while I was waiting.  What followed next was ten minutes of the worst beating, using belts on my bare bottom, that I have had in my entire life.  My mother and grandmother took turns until they were too exhausted for more and sank into chairs.  Of course I screamed from pain, but also from the injustice, and through my tears I asked why I was beaten.

“So that you will never tell anyone what you just heard,” said my mother. “If you do, Frau Schick will surely be sent to a concentration camp herself.”

“And,” my grandmother added, just to make sure, “then you’ll have to walk all the way downtown when we send you to the store.”