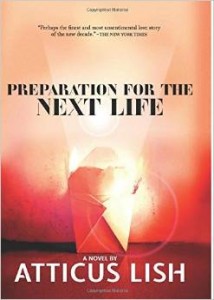 Reviewer Madison Smartt Bell, describing this year’s winning novel, seems to think it will inform and enlighten readers, who think of the “members of our polymorphous underclasses… as statistics.”  The book will give those readers “a salubrious shock.”  Interesting!

The book actually sounds great.  Madison Bell, I wonder who your friends are.  Or who you think might pick up this book.

Here’s how the PEN/Faulkner organization describes winner Atticus Lish’s Preparation for the Next Life:

Atticus Lish’s Preparation for the Next Life is a document of the undocumented and an unlikely love story between a Chinese Muslim immigrant, Zou Lei, and a traumatized Iraq War veteran, Skinner.  Skinner comes to New York after a disastrous tour in Iraq, looking for a party, “holding to the idea that if he partied hard enough, he’d eventually succeed in having a good time and would start wanting to live again.”  Zou Lei comes to New York fresh from a deportation scare in order to, “stay where everybody was illegal just like her and get lost in the crowd.”  When they cross paths in a food court, they fall into a relationship haunted by Zou Lei’s fear of deportation and the symptoms of Skinner’s post-traumatic stress disorder.  There is little, it seems, either can do to save the other.  Preparation for the Next Life forces readers to look squarely at a host of the failures plaguing contemporary American society.  Lish’s prose is dogged and steadfast as he describes his characters’ raw reality and the desperate lives they struggle to lead.  Praising the novel in The Nation, Madison Smartt Bell writes: “The members of our polymorphous underclasses most often appear as statistics; in presenting a few of them as individuals, Lish offers his audience a salubrious shock.”

You’ll remember that the PEN/Faulkner Award is given to a work of American fiction each year and is one of the highest honors available to American authors.

The other four nominees for the prize were:

Jeffery Renard Allen for Song of the Shank (Graywolf Press)

Jennifer Clement for Prayers for the Stolen (Hogarth)

Jenny Offill for Dept. of Speculation (Alfred A. Knopf)

For more on the history of this Award:  http://www.penfaulkner.org/award-for-fiction/.