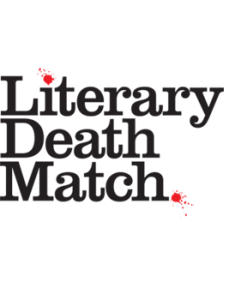 You enter The Stone Fox not knowing what to expect.  It’s just a local spot, with a bar and some tables and overworked waitresses.  There’s an energy in the room, but it’s not all good.  You’re waiting for the blood sport – or whatever lies ahead – to begin.  Then the house lights go down, and the stage lights go up, and you realize you’re part of a strange and enchanting circus of the written word.

It begins with the dapper ringmaster in his pin-striped suit, half Willy Wonka and half some Gatsby look-alike.  He’s as slick a showman as ever there was, engaging the authors, the judges and the audience.  One at a time, four authors stand before us to bare their souls (or their lusts, or their memories, or their imagination) in seven minutes or less.  Three judges sit on the side of the stage, offering commentary both clever and absurd.  The audience is hushed – then roaring – in delight and shock, depending on the author.  Several rounds of readings produce two finalists who are surprised by a turn to a game show format led by our fast-talking ringmaster.  The quickest author to the bell with the right answer wins.  The finalists (along with audience help) must correctly identify famous authors based on one-star reviews from Amazon.com. 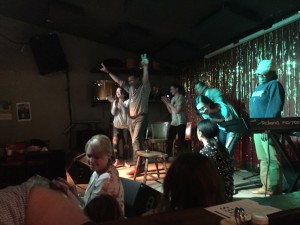 In the end, Adam Ross emerged triumphant, crushing an ill-tempered if beautiful young poet.  “Fuck you!” she cried to the ringmaster after losing – “You didn’t include any poets!” (In the final game show phase of the competition, she meant.)

Adam Ross, you’ll recall, wrote the disturbing and genius Mr. Peanut and the more civilized short story collection Ladies and Gentlemen.  “I always thought it would be great to win the Pulitzer,” he said the day following his big win, “but this might be enough.” 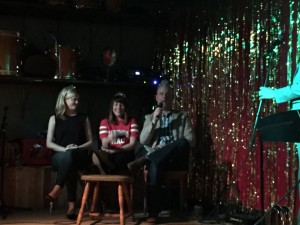 Judge Andrew Maraniss (Strong Inside: Perry Wallace and the Collision of Race and Sports in the South) kept it kind, funny, and classy in the “Literary Merit” category.  Judge Mary Laura Philpott (editor of Parnassus’ Musing blog and producer of I Miss You When I Blink) brought a lot of saucy smarts as judge of “Intangibles.”  Audience member and local luminary Townes Duncan brought his son and their combined wit and knowledge (including a willingness to shout answers to a poet in distress).

I stumbled out of the Literary Death Match sure that I’d never seen anything like it before and never would again – until next October, when it returns with a new cast of characters.  Thank you to The Porch Writers’ Collective for helping bring this amazing spectacle to town. 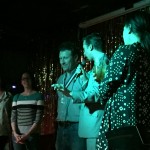 You can hear Adam read from his newest work this Monday night, April 20th, at Montgomery Bell Academy’s Pfeffer Auditorium at 5 p.m.