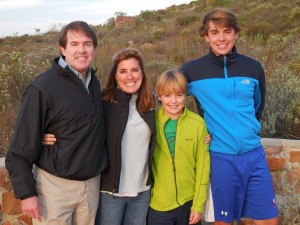 Katie and Kevin Crumbo give marriage a good name.  Seriously – are they ever sharp with each other?  I’m trying to figure out their secret.  Maybe it’s Katie’s unflagging good cheer.  Or Kevin’s kindness and patience.  Her cute laugh?  His warm smile?  Maybe they just continue to like each other after 22 years of marriage and raising those two fine boys, now ages 17 and 12.

Kevin’s a partner at KraftCPAs who specializes in complicated restructurings of troubled companies.  A boy from Indiana who loves the rhythm of life in Nashville, he plays guitar in a local band called Old Dog New Tricks.  A favorite summertime activity involves gathering friends to “grill, mix Sangria, and break out the guitars.  Sort of like the Bluebird, but no one will mistake us for Grammy contenders.”  Katie has found great fulfillment for nearly 20 years as a nurse practitioner at Vanderbilt.  Now part time there, she’s excited to take on the job of president of the USN parent association for the coming school year.  But first, as the undisputed commander in chief of her house full of guys, she will lead the family vacation to France then return to the US to direct summertime expeditions from British Columbia to the Florida Everglades and points in between.

I always love to know what Katie and Kevin are reading!  Today, they answer a few questions and share their thoughts on some current reads.

I’m always a little reluctant to ask this, but some people don’t mind answering – what’s your favorite book of all time?

Katie: A Prayer for Owen Meany, by John Irving – I read it sometime after college.  It was bittersweet and spiritual.

Kevin: Confidence Men: Wall Street, Washington, and The Education of a President, by Ron Suskind.  A remarkable account of Obama’s rise to the Presidency and his administration’s handling of many contemporary issues.  It is instructive on the challenges of consensus-building and leadership in an unstable economic and political environment.

How do you choose your next book?

Katie: Bacon (truly!) and my amazing two book clubs – they make me stretch and choose books outside my comfort zone.

Kevin: Mostly recommendations from friends or during my airline travels.  I enjoy time between flights at many of the marvelous bookstores that have opened in airports.  Baltimore has the best selection and most knowledgeable staff I’ve encountered.  Authors are often on hand promoting their most recent writings.  Sometimes I buy the paperback, but many times I download the audio version.

I know that volunteer work is important to both of you.  Where do you volunteer and why?

Katie: I adore everything that is philanthropic about Nashville – this is a shout out to the Red Cross, refugee services at Nations Ministry, and all the amazing volunteers at University School of Nashville and Harding Academy.  I volunteer because I think each of us can make a difference.  As an added bonus, I have met so many impressive people through volunteering.

Kevin: I’m a board member of the Nashville Zoo and the Nashville Symphony.  I also participate and donate the advisory services of my firm KraftCPAs to The Contributor and other critical needs organizations with recent financial hardships.  Each of these organizations has an enormous impact on our community. 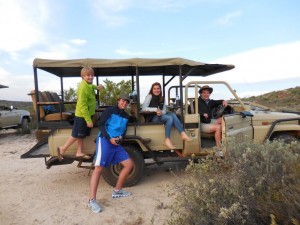 Your two boys keep you on the go, between travel hockey and baseball in particular.  Kids are always watching us and learning.   What do you learn from your children?

Katie: That you can’t control everything; humility; and absolute joy.

Kevin: The phrase “Dad, can you come in here?” means run, don’t walk, in the direction of the little voice who called.  Finding a three year old who has somehow scaled his way to the top of the refrigerator to pet the cat is a startling site.

So before we get to your book reviews, I have to ask you how you found each other.  You seem so well matched.  Why did you marry your spouse?

Katie: Kevin is simply the most kind, thoughtful, steady person I have ever met.  He is a true team player and makes an excellent partner.  There is no one I’d rather be with when times are good and bad.

Kevin: Mainly because she’s beautiful!  She’s also the best person I know.  Loving, caring, and smart in everything she does.

Is there anything you disagree on?  For instance – what team do you want to be pulling for on a Friday night?  (Apart from your kids’…)

On to the books: 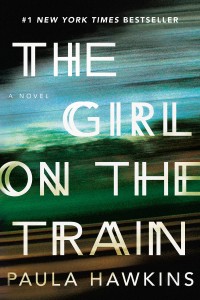 From Katie, on The Girl on the Train, by Paula Hawkins:

One of my New Year’s Day rituals is looking back at noteworthy books on critics’ lists of the best books of the year.  I pore over the numerous lists from the New York Times, NPR, the Washington Post and others.  It’s exciting to learn which critics I may have agreed with and to find books that I may have missed.

One book that hadn’t yet been released but seemed to be mentioned most everywhere was the debut novel by Paula Hawkins – The Girl on the Train.  It really caught my eye as numerous critics compared it favorably to Hitchcock thrillers and Gone Girl.  That concept of not getting your hopes too high was lost on me, and I dove in with my interest fully piqued.

The story begins with Rachel, who voyeuristically observes the lives of a married couple from her commuter train window.  Readers quickly learn that Rachel is divorced and an alcoholic who fondly recalls her previous married life with husband Tom. It is slowly revealed through numerous flashbacks and present day experiences that Rachel is an unreliable narrator whose past is clouded with misinterpretation due to alcoholism.

Rachel’s many regrets stem from a failed marriage to Tom who is apparently happily remarried.  Periodically, the narration switches from Rachel, to the wife in the married couple Rachel watches from the train window, to Tom’s new wife.  One strange murder and two extramarital affairs later, readers discover a very dark side to one of the main characters.

Perhaps it’s better to feel surprised than disappointed?  Book critics set expectations for this book so high that it may have been doomed to fall a little short for me.  The comparison to Gone Girl perhaps overly prepared me for the “unreliable narrator” scheme and spoiled the surprise.

I was later comforted by fellow book club members who, like me, felt the Gone Girl comparison was unwarranted.  Will I stop reading reviews to avoid disappointment?  Absolutely not!  Will The Girl on the Train make it to a Best Books of 2015 list?  Time will tell. 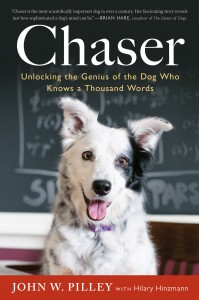 From Kevin, on Chaser, by John Pilley:

No critics’ lists or book clubs here.  My books are mostly nonfiction and recommended by business colleagues on economic and political topics, or much more interestingly, at the urging of conspiring friends I’ve made in the midst of what my family calls an embarrassing number of hobbies taken way too far.  Guitars, martial arts, sailing, fishing and golf – there’s sensational camaraderie to be enjoyed in a folk-rock band or training for the next Brazilian jiu jistu tournament.  Pretending golf handicaps would be reduced if we worked less and golfed more.

No need to reach for such camaraderie, though, for my most recent hobby.  It reaches for me around 4 am every morning as the cold and inquisitive nose of Captain Jack Sparrow finds my hand on the edge of the bed.  Named for the Johnny Depp character in Pirates of the Caribbean, a black patch covers one eye of this rescue dog who is a mix of Border Collie, Great Pyrenees, and perhaps a German Shepherd somewhere in the blood line.

Training Jack at this early hour each morning is inspired by the book Chaser and the dog of the same name.  It’s the true story of a Border Collie who can identify more than a thousand toys by name and retrieve them.  These toys comprise hundreds of stuffed animals, balls, and other objects. When asked, Chaser searches and retrieves any one of the toys from a pile of more than a thousand.

Author John Pilley was once a psychologist and professor at Wofford College in Spartanburg, South Carolina.  The book is his account of Chaser being selected from a litter of puppies due to her curiosity and pleasant nature and his later training of her over a long period with positive learning methodologies.

It comes as no surprise that a remarkable bond between a man and his dog is formed in the course of training.  However, Pilley is surprised at Chaser’s stunning memory and ability to interact with other people.  She learns to distinguish nouns and verbs and group similar items like balls or Frisbees.

I now call it the amazing story of litter to literacy.  The book cover appears a bit like one in a pediatrician’s office, but the storytelling is a touching mix of Southern charm and academic skepticism. 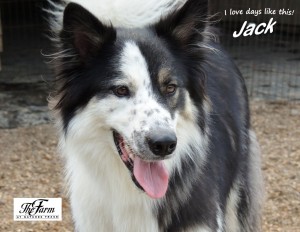 Jack won’t be challenging Chaser for the trophy on canine memory skills, but the book has been an inspiration to train Jack for many other skills I had never dreamed of.  He is now a certified service dog with a variety of talents.  And because some level of showboating is just plain fun (for the dog, of course), he’s learned to catch two Frisbees in one jump and sometimes tries to be the goalie in driveway hockey games!

Pilley and Chaser are easily found on the Web. YouTube has several marvelous videos.  (Note from Jennifer:  You could start with this one but be warned: it might make you cry.)

Thank you, Kevin and Katie!  Katie sealed the deal for me:  I’m taking a pass on The Girl on the Train.  Kevin, if you want another project, I know a very smart puppy who might benefit from some more training!

Photo credit to The Farm at Natchez Trace for the gorgeous picture of Captain Jack Sparrow.