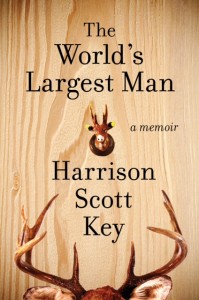 Harrison Scott Key describes his memoir The World’s Largest Man as “a true story about what it’s like to be related to insane people from Mississippi.”  “As a boy, the author was partial to sock puppets, calligraphy, and poems tapped out on an electric typewriter.  Even so, “Pop” attempted to teach his son all the necessary outdoor skills so important to a growing boy, including contact sports, fishing, fighting, and [hunting]…Those were the pertinent and suitable activities for boys coming of age in the environs of Coldwater, Mississippi… Consistently seasoned with laughs, this memoir is adroitly warm and deep when it is called for,” writes Kirkus Review. 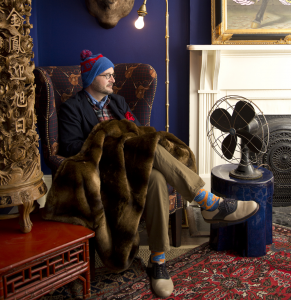 Harrison answered a few questions before coming to Nashville for the Southern Festival of Books.

If it’s raining hard, I like to watch my children wander the house with sofa cushions looking for shelter.

As I write in my recent memoir, I often read books in places where reading was discouraged, such as church and school.

I have to decide every day.

What is the first story you wrote, and at what age?

It was probably gratuitous homework, and I probably mocked the whole enterprise by writing something inappropriate that called into question the very pedagogy of the assignment.

What are your some of your favorite books (no more than 3)?

Lied to my internist about the recent appearance of certain moles

Where do you live, and what do you like most about it?

I live in Savannah, Georgia, and what I like most about it is that’s where all my things are.

Tell us about your pet…

I have a cat with a broken leg.

Do you love games, or not so much?

My family used to have this game we called “Let’s Throw the Cat” but we don’t play it much anymore.

Any game you especially love or hate?

I hate Monopoly and anyone who likes Monopoly is my enemy.

The fact of humankind’s total depravity

More questionnaires in the future 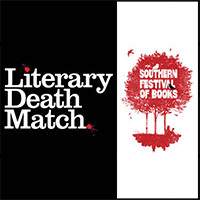