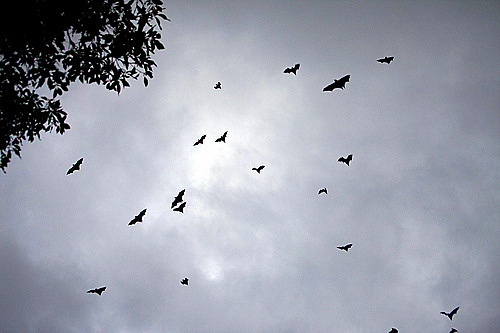 Lately I’ve been sitting on the back porch at dusk watching the bats emerge.  First I’ll see one or two skittering high above, then six or eight will appear as if out of thin air.  After that, I lose count; there might be twenty.  For a moment they swirl about together with an odd grace, then they set out on their own separate hunts.  Bat seeks mosquito for fun, maybe more.  It happens the same way each time I watch.  In the twilight hours their jagged awakening marks the beginning of night. 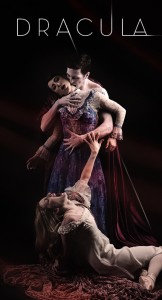 Artistic Director and CEO of Nashville Ballet Paul Vasterling first choreographed Dracula for Nashville Ballet in 1999, inspired by the Bram Stoker novel as well as the many films of that story.  This time around, he has made some changes:

“I’ve been able to revise it for the company that I have now – which means I’ve adjusted the choreography to suit the performers who are in it now; the essence of what I created is still there, it’s just been updated.  Also, I have been able to bring out sensual aspects of the story that I wasn’t really comfortable doing when I created it, which has been freeing.”

Paul’s great theme, which he returns to time and again in his works, is that of mature love.  “Dracula definitely explores my pervasive search for the idea of mature love,” Paul says.  “The character of Dracula is torn between the sensual/sexual/animal-erotic and the rational/pure/human.  He wants a  partner and yet when he finds her he can’t help but defile her (and make her like him) by biting her.  He is unable to achieve or experience the balance of rational and sensual and selflessness that makes mature love, and it tortures him.”

This isn’t the Nutcracker, friends.  The Nut is perfect for the holidays – but Dracula is hella turnt for October. 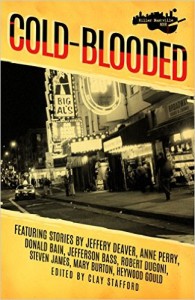 Thrill #3:  Shiver while you read Killer Nashville Noir:  Cold-Blooded, edited by Clay Stafford (available at Parnassus Books now and at Amazon on October 27)

Killer Nashville Noir: Cold Blooded is a collection of new stories from some of the biggest names in suspense, including New York Times bestselling titans Jeffrey Deaver, Anne Perry, Donald Bain, Mary Burton, Robert Dugoni and Jefferson Bass.  Other contributors include locals Clay Stafford, Blake Fontenay, Jaden Terrell, and Dana Chamblee Carpenter.  This new collection comes out of the annual Killer Nashville Conference, founded by Clay Stafford, which in a few years has become one of the biggest thriller conferences in the nation.

Many of the stories are delightfully short:  chicken nuggets of suspense.  They are perfect for a reader like me for whom protracted suspense is no pleasure.  I’ve only dipped in and out of this collection, but I’ve been especially taken with the spooky noirish mood set by stories like “Kissin Don’t Kill,” by Catriona McPherson, which begins like this:

He was deader than a dead duck up a dead end with a dead weight tied to cold dead ankles.  But his widow, sitting at his bedside, chafing his hand and talking softly to him, every so often bending over to kiss him, still didn’t seem quite ready to let him go.

You might not be surprised that things aren’t exactly as they seem.

The story “In Plain Sight,” by Jefferson Bass, is set at an outdoor human-decomposition lab at UT-Knoxville:

The spring semester was winding down, many of my students were desperate for extra credit, and the Body Farm… was due for its spring cleaning.  Spring Cleaning at the Body Farm didn’t involve dusting, weeding, or collecting empty beer cans; spring cleaning, Body-Farm style, involved collecting bones – bare and not-so-bare – and hauling them into the processing facility for simmering and scrubbing.  A Saturday morning might not be the kindest time to schedule the project, I reflected.

This story both reviles and intrigues.  You think it’s all fiction?  I have been informed that there actually is a human decomposition lab at UT. 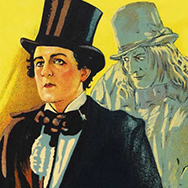 John Barrymore, playing both Dr. Jekyll and Mr. Hyde in this 1920 film, “gives this role his all,” writes blogger Fritzi Kramer.  “And his all is quite a lot.  He smirks, simpers, crawls, sobs, screams, leaps, contorts… My goodness!  I know that some reviews have called his performance too broad.  I guess I should call him out for the ham he is but his enthusiasm is infectious…

As Jekyll, he is constantly overwhelmed by guilt, by fear, by unbearable temptation… All the while managing to constantly turn sidewise and show off that famous profile.

As Hyde, he is a depraved wretch.  He tramples children, bullies barmaids and even gnaws on the throat of one of his more unfortunate victims.

You might be interested to know that Robert Louis Stevenson wrote Dr. Jekyll and Mr. Hyde in 1886, but the 1920 film starring Barrymore takes its shape from the stageplay adapted by T.R. Sullivan.  “…[W]hile the original tale was laid out like a mystery, with Jekyll’s friends (and the reader!) trying their best to discover the secrets of Mr. Hyde, the play shared the character’s duality immediately and emphasized the horror aspects of the tale.  It is this play, rather than the original book, that most film adaptations take their inspiration from and the 1920 version is no exception.” (again, from Kramer).

If you wish, come in costume for this annual concert hall tradition! 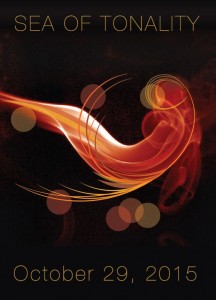 Thrill #5:  Rock on with Intersection’s “Sea of Tonality,” Thursday, October 29

On October 29th, Kelly Corcoran brings an exciting and possibly even haunting performance to the Musicians Hall of Fame and Museum with Intersection’s “Sea of Tonality.”

“Kelly Corcoran has done heroic work as a conductor, molding the Nashville Symphony Chorus, which she directs, into a precision instrument.  She’s also greatly expanded the city’s musical horizons as the founding conductor of Intersection, a contemporary music ensemble with an unfailing sense of adventure,” writes John Pitcher in this week’s Nashville Scene.

I asked Kelly if you need to be a fan of contemporary classical music to enjoy “Sea of Tonality.”  “This music is for everyone to experience – no prior knowledge needed!” she replied.  “The great thing about contemporary classical music is that it is so diverse, so if you like bands like U2 and Moon Taxi this will be a different experience, but one based on many similar principles – music with great energy, passion, rhythmic drive and human inspiration.  This program features five different pieces each with a unique voice.  Two of the composers will be at the concert to share their inspiration – Julia Wolfe, 2015 Pulitzer prize winning composer, for her accordion concerto “True Love” featuring Jeff Lisenby, and Tina Tallon.

The concert is named after a concept of Japanese composer Toru Takemitsu.  He spoke of music as a fluid language where different styles and influences mingle together like within the ocean.

“Sea of Tonality” will be a night honoring musicians, composers and the exploration of sound so we hope you’ll take this journey with us and expand your ears!  Classical music is for all of us!”

Based on my experience of Intersection’s first concert, I’m expecting to be dazzled and a bit overwhelmed.  I’m thrilled to be in the first Nashville audience to hear some of these works.

Haunt me, October!  Frighten me.  Shock me.  I’m counting on thrills, bloody spectacle, fun.  The pleasures of family and food and Thanksgiving will wait till your haunting is over and done.