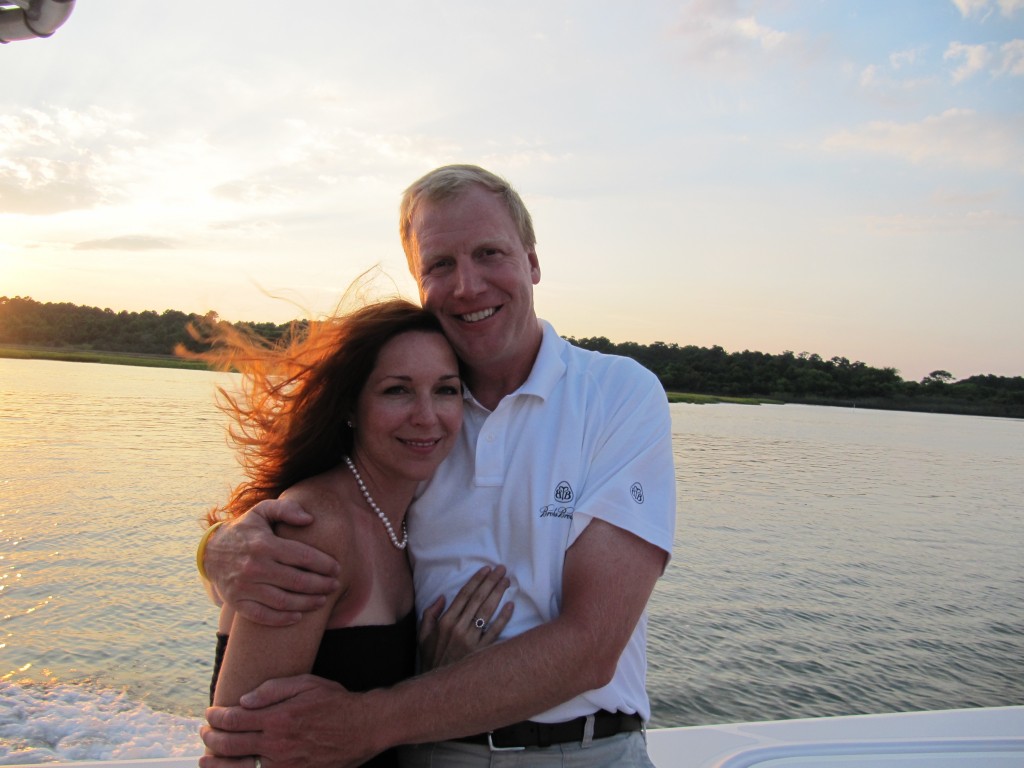 My cousin Christina Apperson could grace the cover of a romance novel.  It’s true.  She’s got the long, flowing chestnut locks, a figure to die for, and I’ll just go ahead and say it – sultry eyes.  I’m afraid she might be laughing too hard for the photo shoot, though!  Christina’s a lawyer, a serious scuba diver, a runner of half marathons, and a reader with a sly sense of humor.

When you first meet Christina, you might only see the smooth, polished lawyer who formerly practiced with the Kansas Medical Society, the American Medical Association, and the North Carolina Medical Board.  You might even think she’s a bit buttoned up.

If you get in a car with her, you’ll start to see another side.  She readily admits that a favorite guilty pleasure is driving faster than others think she should.  “I do try ever so hard to be patient and kind and good, but a slow driver in the passing lane causing congestion occasionally inspires the kind of colorful language typically favored by longshoremen,” she reveals.  “Only when by myself, of course.  I am not proud of this.” 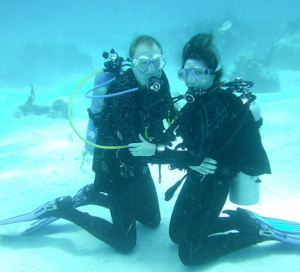 She’d rather be scuba diving, her latest passionate endeavor.  She and her husband Mike were certified two years ago, and they’re obsessed.  They recently returned from an extraordinary dive trip to the Maldives on the Four Seasons Explorer. (As an interesting sidenote, the Vice-President of the Maldives attempted to assassinate the President while they were there, but the resort shielded them from any news of this.)  “Mike and I saw about twenty or so reef sharks circling in a sharknado about ten feet away from us, a whale shark about five feet away, spotted eagle rays, turtles, tuna, and thousands upon thousands of reef fish of every conceivable color, size and shape.  Unimaginably beautiful!”  (I didn’t know that a “sharknado” was an actual thing, but now I do!)

The other thing you will learn about Christina if you know her better is the deep sweetness of spirit that undergirds her character.  Here is Christina at age six, in her very small elementary school in Northern Virginia:  “It was housed in a beautiful converted antebellum mansion,” she remembers, “and there was a mounted moose head at the top of a wide staircase, his nose worn off by generations of schoolchildrens’ hands petting it as they passed by.  That and a tiny room that had been converted into a library which you could go into unsupervised if you were Very Good.  I tried to be Very Good but apparently not many did as I was often there by myself surrounded by the most dazzling collection of old books, including Nancy Drew and Trixie Belden, and I could read as many as I wanted.  I drove by Fairfax Brewster ten years ago and surprised myself by bursting into tears upon seeing it had been scraped and replaced with McMansions. The classes were very small (I completed sixth grade with five other children) and the teachers were all motherly, lovely wives of military officers stationed at the Pentagon and Fort Belvoir.”

I got awfully lucky to inherit Christina as a cousin when I married Gus.  Today, I’m happy to share her with you, and you’ll see why I love her when you read her spirited post on the Outlander series. 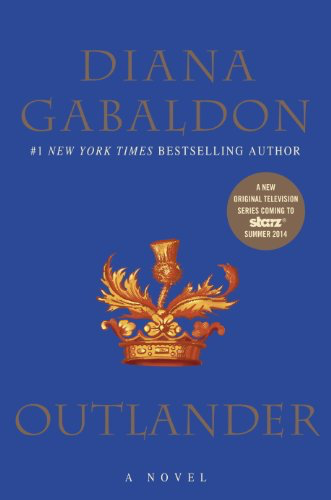 On a dreary Sunday last January, the Christmas tree down and the ornaments in renewed exile in the attic, I snugged into the couch with a crackling fire and a leathery cabernet and opened Diana Gabaldon’s Outlander… and did not look up until early Spring.  Sure, I was dressed and coiffed and lip-glossed and perfumed and sentient, showed up to work on time, was even convivial at gatherings.  But my mind and my heart lived in a realm entirely of Diana Gabaldon’s creation.

Gabaldon published the first book of the Outlander series in 1991 and her first editor observed, “These books have to be word of mouth books because they’re too weird to describe to anybody.”  Apparently word travelled.  Outlander and each of the successive seven books in the series have been New York Times bestsellers and, after years of lobbying by Outlander fans, in 2014 Starz took on the prodigious responsibility of recreating them for tv. 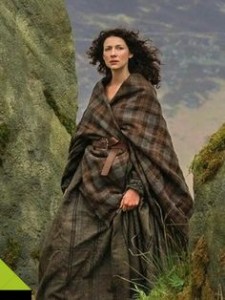 The Outlander series has been described as a “time hopping, continent spanning salmagundi of genres.”  They incorporate elements of historical fiction, romance, mystery, adventure, and science-fiction/fantasy into surprisingly rich and dense sagas.  Gabaldon’s heroine, Claire Randall, is a British World War II Army combat nurse back from the war and reunited with her historian/British intelligence officer husband on a second honeymoon in Scotland when she walks through a circle of standing stones (think Stonehenge) and back in time (feel free to roll your eyes) to 1743 Scotland.  Claire is immediately plunged into conflict as she emerges into a skirmish between British redcoats and Scottish Highlanders.  She is forced to live by her enviable wits as she fights to return to her own place and time, navigates tricky clan politics, and becomes enmeshed in the Scottish Jacobite Uprising, which – as British history buffs know and Gabaldon quickly enlightens those of us who didn’t – ends at the Battle of Culloden with the devastation of the Scottish clans.  Add a smoking hot Scot (not her husband) and a deliciously inventive and sadistic villain and the 627 pages of Ms. Gabaldon’s humble first offering practically turn themselves.

Gabaldon’s Claire is the kind of complex, vibrant heroine who makes aspiring pulp novelists consider abandoning their craft in despair.  She’s a big-hearted, whip-smart, strong, resourceful, passionate, drinking, swearing, frequently pig-headed hot mess of a woman who rushes, often too quickly, to action.  She would have difficulty corseting herself into ladylike conduct in any era, but her ongoing rebellion against suffocating eighteenth century Scottish convention is pure fun.  She is a formidable opponent whether the weapon of choice is words, dirks, poison, or muskets.  Combat nurse training and extensive knowledge of herbal remedies and English history serve her equally well galloping over moors, sleeping in the heather and plotting political strategery.  You just might develop a bit of a girl-crush on her. 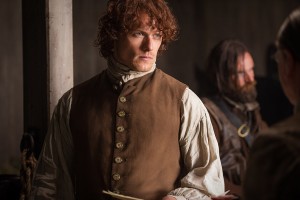 And just as quickly, you will fall hopelessly in love with the quintessential romantic hero (sorry, Rhett) – Jamie Fraser.  He is the enormous, ridiculously ripped Highlander on the covers of the grocery store historical romances one hides from the children and would never, ever admit to reading in polite company. ather than merely recreating the shallow clichéd heroes which I’ve been told populate this genre, Ms. Gabaldon instead lovingly and painstakingly augments the stock romantic hero character with intelligence, honor, leadership, empathy, cunning, sensitivity, wisdom and humor.  Sigh.  The eldest son of a Scottish nobleman in a running disagreement with our villain and with English law, we first meet him as a dirty, injured cattle thief in a kilt and, like Nurse Claire, enjoy peeling back a few layers.

In less capable hands, Gabaldon’s salmagundi could quickly degenerate into a gluey stew of stale clichés.  Diana Gabaldon gleefully toys with all the tropes of her chosen genres and revitalizes them by wrapping them around vibrant, fully realized, gloriously original characters.  Even minor characters are sharply drawn and memorable.  Her dialogue, like her storytelling, is fast and witty and fun.  Her sharp, spare prose relentlessly drives her inventive storylines forward at a sprinting, your-eyes-can’t-move-fast-enough pace.  Gabaldon’s research in World War II history, Scottish history and culture, English history and culture, field medicine, medicinal plants and Scottish dialect creates a rich backdrop and integrates seamlessly into the story, rather than being served as a heaping helping of pompous didacticism that can sometimes lull even this devotee of historical fiction into stupefaction.

The secret behind Outlander’s appeal is simple.  Diana Gabaldon is a brilliant woman with a playful and fecund imagination.  In addition to the eight novels in the Outlander series (book nine is underway), The Outlandish Companion and a graphic novel, she has written twelve other novels.  A PhD in quantitative behavioral ecology, she did post-doc work in Marine Biology at UCLA.  She was a professor of anatomy at Arizona State and ran a scholarly journal while doing freelance work creating comic books for Disney.

It feels almost petty to identify shortcomings in a first novel that accomplishes so much so well and is beloved by so many.  Claire, however, does occasionally commit the uniquely female sin of crossing the elusive boundary between strong and strident, which might try some readers’ patience.  And while the time travel element felt contrived in a way that none of her other fantastical plot twists and turns did, it is a pretty darn useful plot device that she smoothes over in later books.

More tender readers should be forewarned that extreme mental and physical brutality feature prominently in the book.  And if you catch your daughter reading it under covers with her i-phone flashlight, don’t let her hustle you into believing she’s developed a sudden fascination with Jacobean politics.  There’s some pretty racy stuff in there.

As you have by now surmised, Ms. Gabaldon is not likely to win a National Book Award nor is her literary canonization imminent.  This is not a poetic rumination on the resilience of the human spirit.  This is the simplest of delights and the ultimate in escapist reading – an exciting fast-paced tale, extremely well-told.

I gently caution against picking it up before making adequate preparations.  Pay your bills.  Buy groceries.  Do laundry.  Complete the work/volunteer project.  Because the odds are very good that you might find yourself on the couch with your nose in a book until the last page- or perhaps the entire series – is finished. 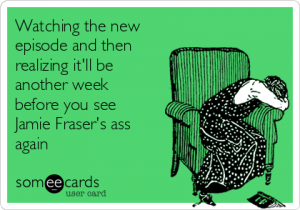 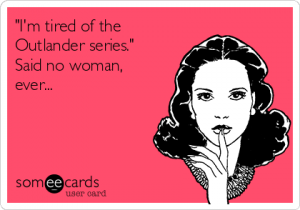 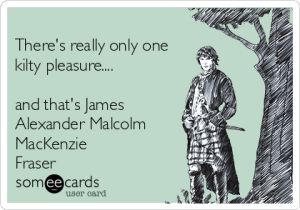 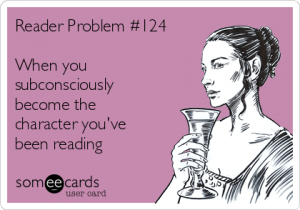