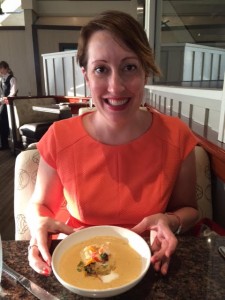 Delaney with Lobster Bisque
at Skates on the Bay (Berkeley)

My friend Delaney Gray is just the right person to review Chrissie Hynde’s new memoir Reckless: My Life as Pretender.  Delaney is a creative, generous spirit who’s been tuned in to the musical scene for a long time.  You might be surprised by what she has to say!  A long-time fan, she’s fascinated – but she’s not exactly gushing.

Delaney’s family moved from California to Tennessee when she was six years old because her dad – a songwriter – wanted to be in Nashville.  Growing up, she listened to a lot of what would be called Americana now.  “Of course I was drawn straight to obnoxious pop music as soon as I got my own radio, and I still have a big soft spot for ’80s pop.  We also listened to opera and classical music around the house.  Both my sisters played piano so there was a lot of Chopin especially.  Then I really connected with grunge music like Pearl Jam and Foo Fighters in high school and college.”  These days, you might find her listening to Ryan Adams, The Strokes, REM, The National, or Patty Griffin if she’s in her car. 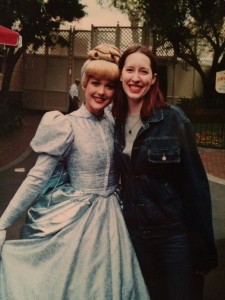 In her free time, you might find Delaney cooking, reading, or enjoying time with her darling husband and their three cats and three dogs (“This is insane.  I do not recommend having six pets!” she laughs).  If she’s with her two younger sisters, they might be playing cutthroat rounds of Canasta and making fudge.  She’s an ambitious cook, and feeding people good food in her home makes her happy.  If she could invite any three people to dinner (from this world or the next), she’d ask Julia Child, her Grandma Hazel, and Dwayne “The Rock” Johnson.  She’s a big fan of Cinderella based on her sunny disposition, her excellent relationship with animals, and her possession of a fairy godmother.

Delaney brings a gorgeous warmth of spirit and great creativity to all her endeavors.  She’s also very organized.  Her family knows this:  she hosts Thanksgiving every year for between six and forty people.  One year, she cooked the entire feast in her mom’s kitchen for the California wing of the family, “then we hauled all the food up the hill to a nearby motel, where we ate off the pool table in the rec room.  Smash success!”

Delaney brings all that creativity and organization to her job as Development Events Manager for the Nashville Symphony, helping manage the Symphony Ball and Fashion Show each year among other responsibilities.  In a busy season, I’m so grateful she took the time to share her thoughts today. 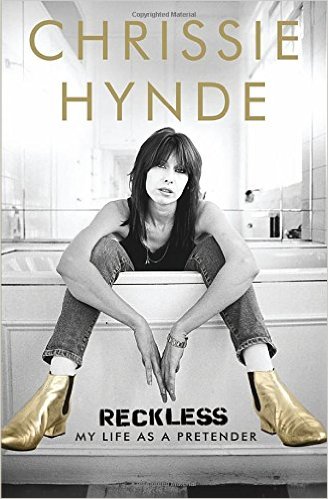 I can’t quite remember when I first became aware of The Pretenders, in the same way that no one who grew up in the ’80s actually remembers the first time they heard Madonna, or Prince, or George Michael.  Suddenly MTV was there, and it was full of rock stars from everywhere.  I remember The Pretenders’ “Brass in Pocket” video, mostly the eyeliner of the sassy/awkward waitress.  That was, of course, my first sighting of Chrissie Hynde, the band’s lead singer and lifeblood.  The girl can rock some eyeliner.  The rest of the band barely figures into the video.  I didn’t realize that by the MTV years, one-half of the original band was already dead.

I spent a lot of time with the Singles CD in college.  What a catalogue!  “Don’t Get Me Wrong,” “Talk of the Town,” “Middle of the Road,” those are great songs!  But “Back on the Chain Gang,” that’s not just her best song.  It’s one of THE best songs.  Go on, give it a spin, you’ll remember.  I saw The Pretenders (which for the last thirtyish years has meant “Chrissie Hynde plus three dudes from a rotating cast of faceless backing musicians”) at the Ryman Auditorium in 2003.  She was fifty-two at that show, and she wore white leather pants.  I mean, seriously.  It doesn’t get any more badass than that.  On her book cover, she’s sporting gold boots.  Gold boots!  Gah.

Reckless is a distinctly non-linear autobiography, in much the same vein as Hynde’s songwriting.  She conveys impressions rather than constructing a personal narrative.  Hynde is exactly in between my parents in age, and her recollections of growing up in the ’50s and ’60s jibe with the stories I grew up hearing.   Like my mom, she loved horses and wanted to be a cowgirl when she was little.  Like my dad, she describes long drives into the country to pick up big-city radio stations just to hear James Brown.  Ohio looms large in Hynde’s childhood, the scene of a mini-Industrial revolution that was waning as she came of age.  She was enrolled and on campus during the Kent State shootings in 1970 – the only event she breaks down into detail in the entire book.  Otherwise, the narrative jumps around, often referencing people and memories without really placing them.

Early on in the book, a major theme develops: drugs.  Sure, OK, it’s the ’60s.  We get it: tune in, drop out, etc.  But after drifting away from college, Hynde essentially follows the drugs from city to bus stop to motorcycle club, and I can’t imagine how she survived these explorations unscathed.  Any parent will cringe to read her tale of ditching a school program in Mexico and moving in immediately with a guy she met at a cantina (she calls him “Lee Marvin” because of his resemblance to the actor, which seems to be the extent of what she knew about him before she started crashing at his pad).

“Crashing” comes up a lot.  Again, the culture was different in the ’70s, but the amount of hitchhiking and going home with strangers becomes repetitive and, occasionally, appalling.  Chrissie Hynde was one thumb away from being a sad story of a girl in a ditch, but this only barely registers with her as her story unfolds.  She lingers on spare details like a poster she remembered loving from a certain short-lived apartment, without fretting too much about the fire that nearly killed her roommates.  As I’m reading her words, delivered in her unique language – she has lived in the UK for most of her adult life, so most of her slang is British – I picture her shrugging a lot as she writes: “The Vietnam war was raging, and I knew I didn’t like it, but I didn’t really know why.”  *shrug*  “My parents were worried about me, they wouldn’t send any more money.”  *shrug*  “There was a biker gang, they told me to take my pants off.”  *shrug*

By the mid-’70s, Hynde is in London, then Paris, then London again.  Again, more crashing, more drugs, more questionable life choices.  Here’s where she finally starts to really home in on music; she grew up loving it but is realizing that she wants to make the music, to have a band.  She shares some milestones on the road to rock-stardom: the first time she saw Mitch Ryder and the Detroit Wheels; the time she made eye contact with Iggy Pop in a parking lot; how she bullshitted her way into a job as a music reviewer for NME magazine, which gave her a ton of street cred that she admits she hadn’t earned.  She floats around, meeting more and more people who are leading her down the path to her future – not that she knows it at the time.

To hear her tell it, Chrissie Hynde was the Forrest Gump of the punk movement, randomly brushing past key players and uniting them in her wake.  She started writing songs with Mick Jones, mere weeks before he met Joe Strummer and started The Clash.  She took Johnny Rotten along with her on housecleaning gigs and brought Chris Spedding to see the Sex Pistols for the first time (he would later produce their demos).  She breezed by Nick Lowe and John Cale and Lemmy in London.  She almost married Sid Vicious to avoid losing her travel visa; the marriage clerk’s office was closed the day they went.

The book is nearly over by the time Hynde meets bassist Pete Farndon, guitarist James Honeyman-Scott and drummer Martin Chambers, and assembles The Pretenders.  She describes a world tour (supporting their second album) in alternately loving and despicable terms.  By the time the tour ends, she is romantically entangled with Ray Davies (of The Kinks, a band she adored in high school) and carrying his baby.  Things are starting to fall apart with her co-Pretenders, and then, in a short tragic year, two of them are dead of drug- and alcohol-related causes.  In a more obvious morality tale, this would have been a “don’t do drugs” coda to a lifetime of indulgence, but not our Chrissie.  She describes Honeyman-Scott’s funeral, then a sad encounter with Farndon’s mother a few months after he died, and then, well…. *shrug*

The book wraps up abruptly from this point.  It would have been more correctly subtitled My Life Becoming a Pretender.  I’ve read reviews theorizing that we’ll see a Volume II out of Ms. Hynde, and that’s why she cuts the story in the early ‘80s.  But after spending the days with her in this book, I have a different theory: Chrissie Hynde is a tough cookie, but the experience of losing Pete and James was probably more difficult to relive than she was expecting.  I think she finished that chapter, sent it to her editor, and told them to shove off, although in much more colorful language.