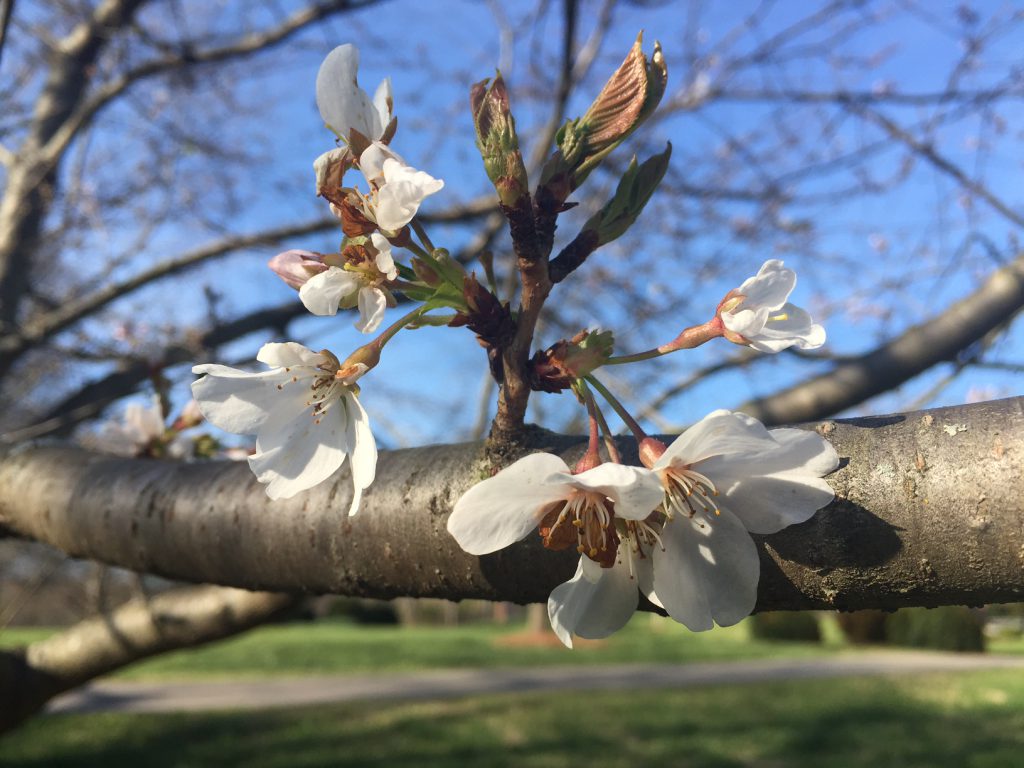 “Spring is a straggly season,” I observed, as Pep and I poked around the yard. She was the one doing the actual poking – under every bush – looking for rabbit nests (while I kept a watchful eye). “The grass is patchy. The daffodils are spent. Weeds thrive, mushrooms persist, the sweet little violets are everywhere. The pin oak clings to its dead leaves while the cherry’s about to bloom. It’s a crazy mishmash,” I said.

“I love spring…” she replied, her voice muffled, as she rooted around under a large boxwood.

“For the potential slaughter of baby rabbits?” I inquired politely.

“No,” she answered sweetly as she emerged. “Because it’s just like you.” I thought I noticed a hint of slyness in her grin as I processed that statement.

“Hmmm,” I replied. “Then I’m glad you love spring! I suppose one could call it a work in progress rather than a crazy mishmash,” I suggested.

“That wouldn’t change it,” she noted, plunging happily into another bush as I giggled. 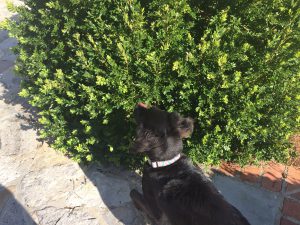 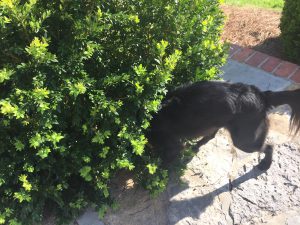 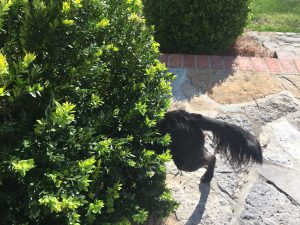 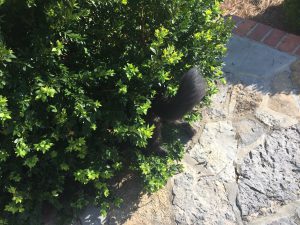 The exact moment of the vernal equinox was 5:28 a.m. central time today, March 20th – the first day of spring.

“Twice a year, around March 20 or 21 and September 22 or 23, the sun’s most direct rays shine on the equator. These two days are known as the vernal (spring) equinox and the autumnal (fall) equinox, respectively….

Instead of a tilt away from or toward the sun, the Earth’s axis of rotation is perpendicular to the line connecting the centers of the Earth and the sun during an equinox. During the equinox, both day and night are balanced to nearly 12 hours each all over the world. 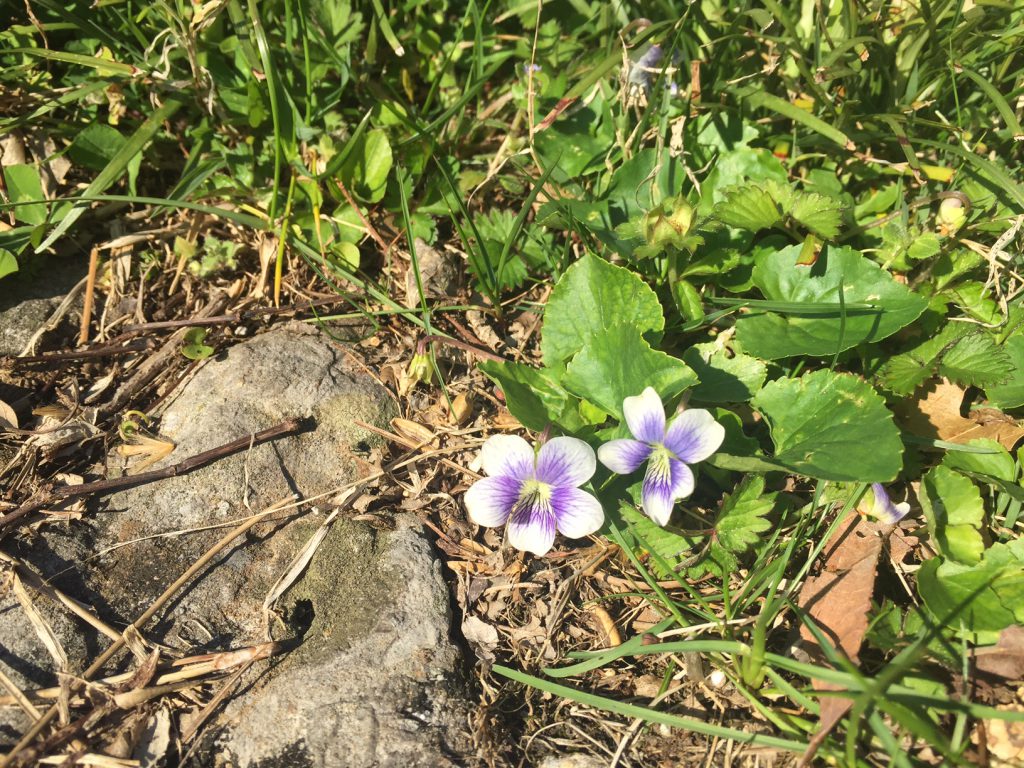 After the cold days of winter, we tend to expect spring weather to be warm and sunny. While the increasing daylight and higher sun angle eventually usher in warmer weather, spring tends to be a fickle season and is slow to start in many places. In most of the Lower 48, spring as a whole is actually a few degrees colder than fall, despite the days being much longer. Here in the District, meteorological spring averages 3 to 4 degrees colder than fall….

Why? Blame it on seasonal temperature lag. There’s a lot more sunlight in spring compared to fall, but much of the sun’s energy goes toward heating the ground and large bodies of water first. The difference is noticeable in more northern cities along the coast. In Boston, for example, the spring months of March through May average more than six degrees cooler than the fall months of September through November.

It’s no surprise, then, that the March equinox is significantly colder than its September counterpart. Just how much colder? This map shows the spring equinox, on average, is some 15 to 30 degrees colder than the first day of fall across large portions of the country: 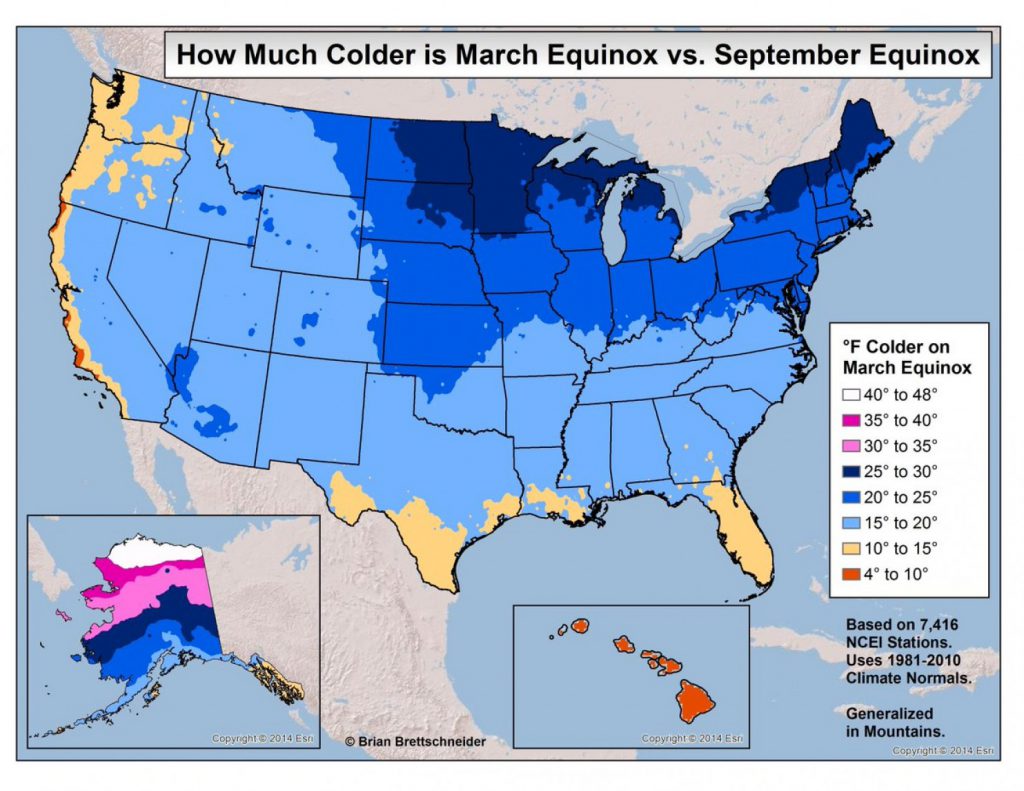 If you like warm weather, time is on your side, though. Spring can be slow to arrive, but with the sun up for more than 12 hours now, tulips, bees (and allergies!) will be here soon enough.” 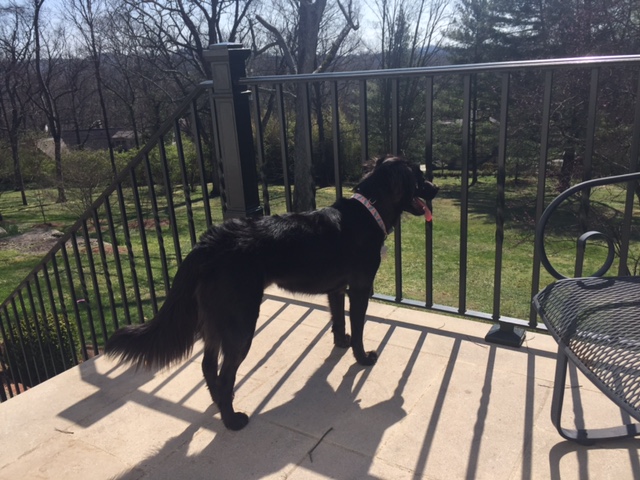