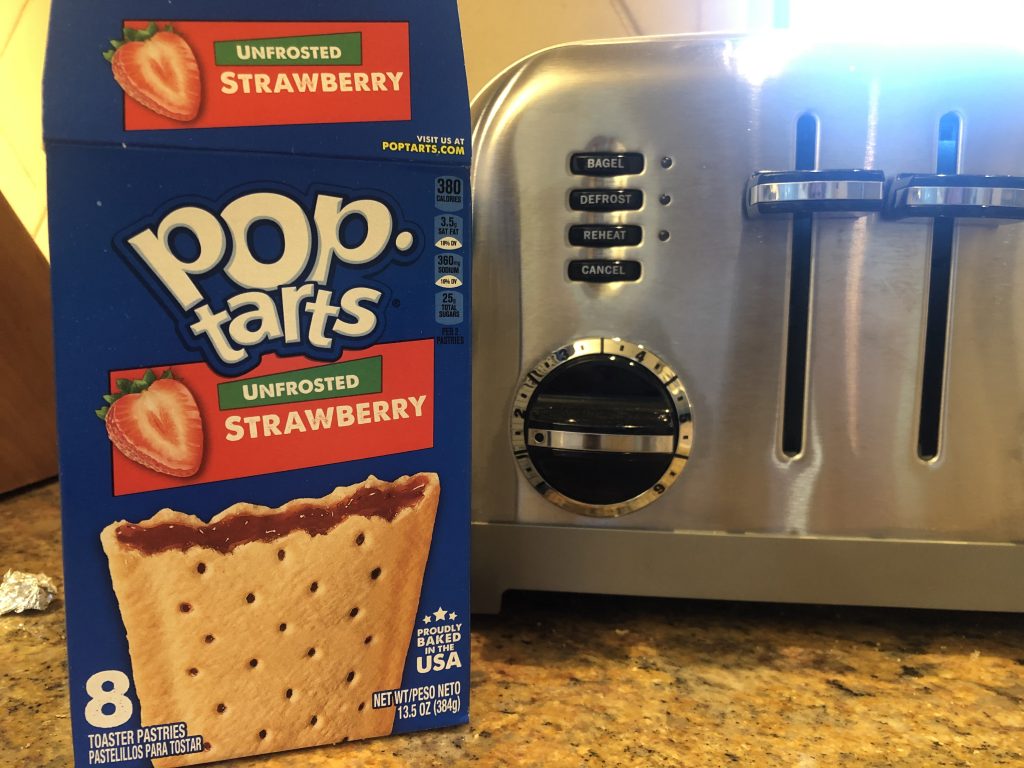 What food are you loyal to? A strange question, yes. One posed by a poet.

Not infrequently destroyed as bits of paper
of no value by the women in my family,
namely Ida, Libby, and the maid Thelma,
my drawings were gone by the tine I was eleven
and so I turned to music and led orchestras
walking through the woods, and Saturday nights
we feasted on macaroni, tomato soup and falso
cheese cooked at three hundred fifty degrees
which I called spaghetti until I was 21
and loved our nights there, Thelma, Libby, and Ida,
fat as I was then, fat and near-sighted
and given over to art, such as I saw it,
though smothered somewhat by the three of them;
and it would be five years of breaking loose,
reading Kropotkin first, then reading Keats,
and standing on my head and singing by which
I developed the longing though I never
turned against that spaghetti, I was always
loyal to one thing, you could almost measure
my stubbornness and my wildness by that loyalty. 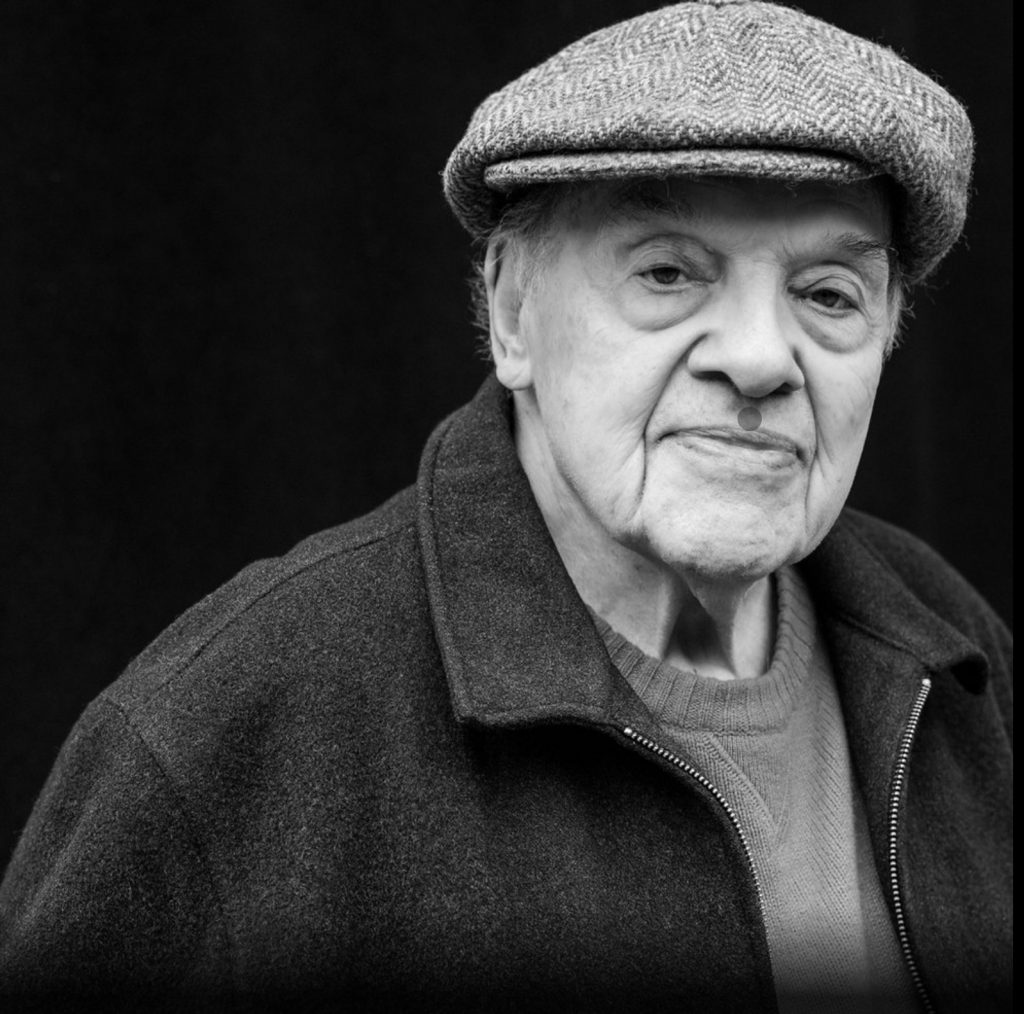 Gerald Stern by Mark Ludak for the New York Times

To learn more about Gerald Stern, you might start with the fawning and also damning write-up at Poetryfoundation.org. A better account of his life can be found at the Pennsylvania Center for the Book. Born in 1925 in Pittsburgh, the son of Jewish immigrants from Ukraine and Poland, he is now 95 years old and still writing.

Stern received the National Book Award for poetry in 1998 for his collection This Time: New and Selected Poems.

And now – for the cherry on top – a bonus poem for today!

THE AUTHOR LOVING THESE
HOMELY MEATS SPECIALLY, VIZ.:
CREAM, PANCAKES, BUTTERED
PIPPIN-PIES (LAUGH, GOOD
PEOPLE) AND TOBACCO;
WRIT TO THAT WORTHY AND
VIRTUOUS GENTLEWOMAN,
WHOM HE CALLETH
MISTRESS, AS FOLLOWETH

If there were, oh! an Hellespont of cream
Between us, milk-white mistress, I would swim
To you, to show to both my love’s extreme,
Leander-like, – yea! Dive from brim to brim.
But met I with a buttered pippin-pie
Floating upon’t, that would I make my boat
To waft me to you without jeopardy,
Though sea-sick I might be while it did float.
Yet if a storm should rise, by night or day,
Of sugar-snows and hail of caraways,
Then, if I found a pancake in my way,
It like a plank should bring me to your kays;

Which having found, if they tobacco kept,
The smoke should dry me well before I slept.

400 years on, John Davies makes me laugh! The poem has such a sweetness and pleasure – such a playfulness – such joy.

But – here’s the mystery – was this poem written by SIR John Davies or John Davies of Hereford, contemporaries? The “Poem in Your Pocket” does not tell me! I will do some sleuthing and let you know what I find out. Unless you happen to know or have the inclination to solve this mystery. Let’s stay in touch… 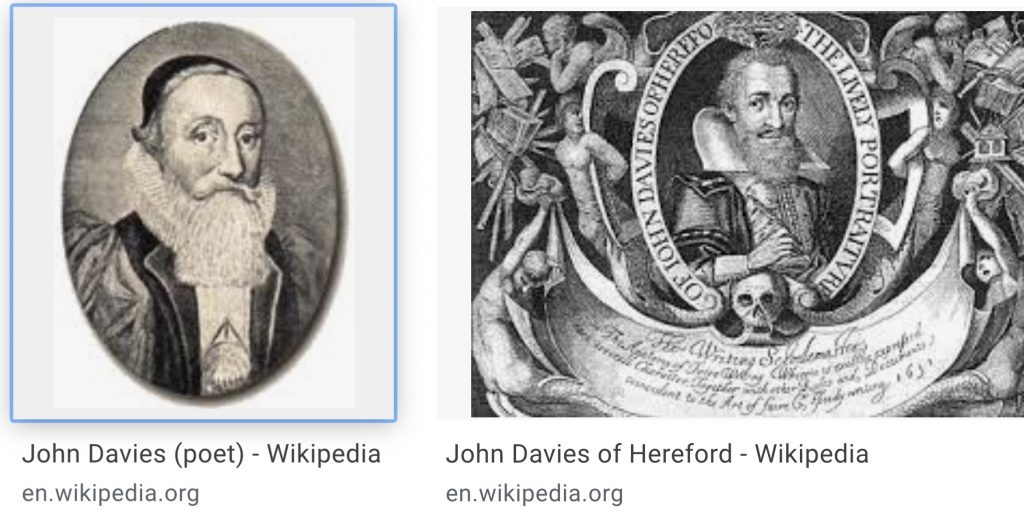 BREAKING NEWS: I think I’ve been had. I don’t think either of those “John Davies” wrote this sonnet. More to come… 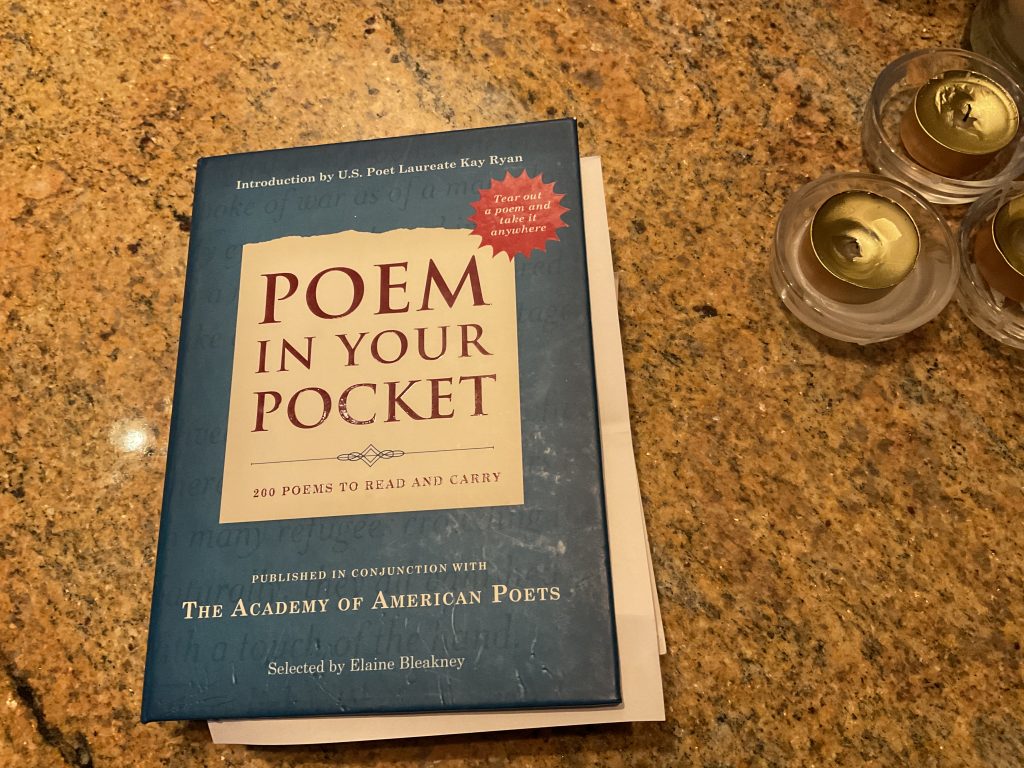