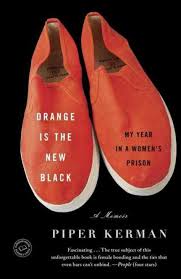 You’ve probably seen or heard of the hot Netflix series, Orange is the New Black, which has introduced many of us to such concepts as “gay for the stay” and “going to the SHOE” (Solitary Housing Unit).  Based on the memoir by Piper Kerman, the TV show follows the adventures and misadventures of a blonde, well-heeled 30-something doing time in federal prison for a 10-year-old drug offense.  The show is often extremely funny, as stereotypes are exaggerated in a light-hearted manner, but it also has tender and frightening moments.  It seems to convey something real and essential about one woman’s experience, while highlighting the more comic elements that exist in many communal living situations.

After binge viewing the first season, I had to read the book.  It’s in paperback everywhere you turn, from airport sundries stores on up the food chain.  Could the book possibly live up to the show?

The answer is yes!  It’s funny and smart, like the series.  It has a thoughtful and reflective quality that the show does not, without getting too heavy.  Kerman’s observations about the “tribal” culture in prison – her word, not mine – are both surprising and not.  Same with the abuses of power she witnesses.  She forms deeply loving and sustaining friendships both in her own tribe and outside of it, and these relationships fuel a remarkable personal transformation.

Orange is the New Black is also – unexpectedly – a food journal of sorts!  Kerman brags about the prison cheesecake she learns to make and even provides the recipe.  Comparing her time at an all-women’s college to her time in Federal prison in Danbury, Kerman writes, “At Smith College the pervasive obsession with food was expressed at candlelight dinners and at Friday-afternoon faculty teas; in Danbury it was via microwave cooking and stolen food.  In many ways I was more prepared to live in close quarters with a bunch of women than some of my fellow prisoners, who were driven crazy by communal female living.  There was less bulimia and more fights than I had known as an undergrad, but the same feminine ethos was present – empathetic camaraderie and bawdy humor on good days, and histrionic dramas coupled with meddling, malicious bad days.”

Piper Kerman’s writing has an ease about it that seems to reflect a woman at peace with herself and her experience.  She does not ignore any of the tremendous anxieties and heartache she experienced or caused others.  But she gets to the right place – and it is pretty amazing to get there with her.