University School of Nashville math teacher and all-round great guy Joel Bezaire recommended some summer reading for me a while back: The Housekeeper and the Professor, by Yoko Ogawa.  I’ve since learned that Ogawa’s novel is also the Harpeth Hall all-school read this year!  This book highlights the beauty, enchantment, and mystery of math.  Did I really just say that?  It does so through the story of the strange and lovely relationship between a housekeeper, her young son, and the disabled professor she cares for.   Written in 2003, the novel was translated from Japanese into English in 2009.

The Professor – never named beyond that – was in his time a brilliant math teacher.  A degenerative brain disease has left him unable to remember anything beyond 80 minute periods.  He has sunk into a deep isolation and depression before the Housekeeper is hired by his sister-in-law.  Each day she must begin their relationship anew, as he has forgotten her overnight; he has a system of pinning notes to his clothing to remind him that he knows her.  When the Housekeeper’s young son starts coming with his mother to work, the three of them become a kind of family to each other.  Each has gifts which they generously share with the others, and a mutual love of baseball also binds the Professor and the young boy.  The Professor encourages the natural curiosity in the Housekeeper and her son.  Over time, they find themselves learning quite a lot about math – and you’ll hardly even notice that you might be learning some, too!

Some of the mathematical concepts explored include amicable numbers, perfect numbers, abundant numbers, deficient numbers, twin primes, “sexy primes,” the value of zero, and Euler’s Formula.  It is no exaggeration to say that many passages in this book are poetic!  On prime numbers, for instance:

The Professor loved prime numbers more than anything in the world.  I’d been vaguely aware of their existence, but it never occurred to me that they could be the object of someone’s deepest affection.  He was tender and attentive and respectful; by turns he would caress them or prostrate himself before them; he never strayed far from his prime numbers… At first, it was hard to see their appeal.  They seemed so stubborn, resisting division by any number but one and themselves.  Still, as we were swept up in the Professor’s enthusiasm, we gradually came to understand his devotion, and primes began to seem more real, as though we could reach out and touch them.

http://www.prealgebraone.wordpress.com/novel-studies.  Here’s Joel explaining why he did this:

A few years ago, I started teaching a novel in my Pre-Algebra class – The Curious Incident of the Dog in the Night-Time by Mark Haddon.  There were a lot of reasons for doing this, the obvious, surface-level reason being that the main character is a lover of mathematics and talks about a lot of interesting math facts throughout the book.  It’s an easy way to engage my 7th graders in some interesting topics.

At least that’s what I told my administrators and any parents who cared enough to ask.  However, I had a deeper, more nefarious purpose.  Curious Incident is also a mystery novel, and I was convinced that students could take the problem-solving strategies that I was teaching them in mathematics and apply them in a (seemingly) disparate discipline.  The unit met with outrageous success:  students reported finding a new love for and interest in mathematics because of the unit, and students and parents alike reported seeing a new purpose in studying mathematics.  A common complaint among adults is that they never use the algebra that they had to learn in middle and high school in their vocation.  That could be very true (I’ll be happy to debate the merits of that argument another time) – but the problem-solving skills and analytical skills that you learn in those algebra classes can be applicable in a variety of areas not remotely related to mathematics.  The Curious Incident unit opened up that connection for a lot of students and their parents.

I set out to find more novels that could be used at a variety of age levels and at a variety of different academic institutions.  Granted, literature in mathematics doesn’t play nicely with high-stakes standardized testing, but the teacher or administrator who is committed to the academic theories behind high-stakes standardized testing isn’t going to be interested in studying literature in math class in the first place.  So I’ve been reading, and I’ve been finding books that could be used in a wide range of math classes.  I found The Number Devil for younger kids and The Martian by Andy Weir (thanks, Jennifer) for upper level students.  I found pretty much anything by Neal Stephenson would work in a high school or college math setting.  I found Schrodinger’s Gat (not a typo) by Robert Kroese for use in physics classes.  And I found The Housekeeper and the Professor.

The Housekeeper and the Professor spoke to me enough that I decided I had to write a small curriculum for use in high school math classes.  I hope it can help quell the protest from high school teachers that the only reason I’m able to pursue a literature study is because I teach middle school.  The Housekeeper and the Professor would make a very interesting study at the Algebra 2/Pre-Calculus level – and the heavy lifting (making the curriculum) has already been completed!  The mathematical topics contained in the book are explained exquisitely simply, but a competent math teacher could lead her students on extension activities to really explore challenging, interesting, and beautiful properties and relationships in number theory. 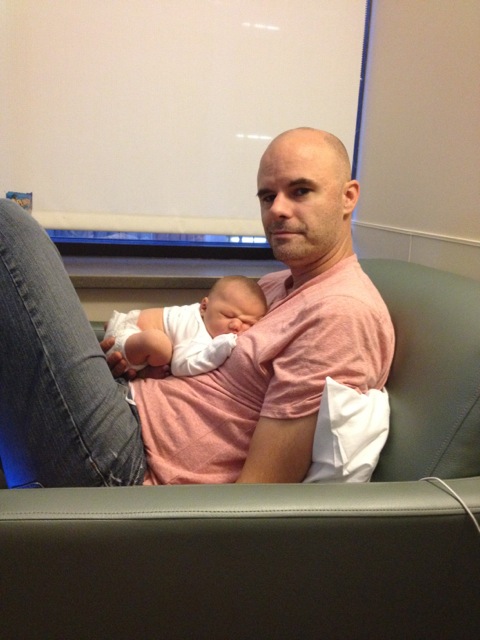 So what spoke to me about The Housekeeper and The Professor?  First, it’s accessible.  It’s a math book aimed directly at non-mathematicians.  Rich topics are explained in very simple terms, leaving enough mystery that an interested reader could pursue more on his own.  The second thing I like about this book is the beauty that is inherent in the writing.  Yoko Ogawa treats mathematics like her own Zen garden, a tranquil and peaceful place where quiet reflection can lead to astounding discoveries.  She invites the reader to do the same; I do hope you’ll take her up on the offer.

Joel Bezaire was recently awarded the first Bovender Chair at USN for innovation and excellence in teaching.  He and wife Jennifer recently welcomed Julian Thomas Bezaire into the world, born July 20th and weighing in at 9 lbs, 4 oz. (“clearly he’ll be fighting in the heavyweight division in the nursery,” notes Joel).  Watch out, big brother Liam, aged 3!  To learn more about Joel, see about.me/joelbezaire.