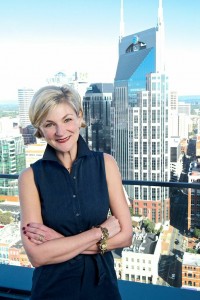 Joelle Phillips remembers the first line of her favorite book as a child: “Once upon a time, a long time ago, if you count Sundays and holidays, there was a little boy named John.”  Joelle loves a good story, well told and well begun; she has a sometimes sly sense of humor; my goodness, she remembers things!

I had a crash course in Joelle this summer when we shared nearly two weeks together touring Scotland with a group led by artist Shane Neal.  We spent long, wonderful days in art galleries, gardens, castles, and the lovely homes of Shane’s friends and patrons: a dream come true, if you aren’t 13 or 15 and looking for the next place with wi-fi (namely, the Puryear daughters).  Joelle and husband Brant helped Gus and me maintain our good spirits despite sometimes challenging family dynamics.

Don’t let her fool you with that impeccable taste and buttoned-up appearance.  She can hold her own in any serious conversation, but she’s just as likely to make everyone laugh.  It’s not surprising to me that Joelle majored in theater at Birmingham-Southern College.  She says theater training came in handy even when her career path made a turn.  As a law student at Washington and Lee, memorizing case names came just as easily as learning lines, and even the toughest professor’s grilling was unlikely to paralyze her with stage fright.

Life has given her a different stage lately, as president of AT&T Tennessee.  She has spent 12 years at AT&T and its predecessor companies, rising through the in-house lawyer ranks before being tapped for the top spot in 2013.  In addition to managing the company’s Tennessee agenda on matters ranging from broadband deployment to navigating state and federal regulation, she oversees AT&T’s extensive philanthropic and community engagement efforts in the state, serving on the Boards of United Way of Middle Tennessee, the Community Foundation of Middle Tennessee, and the Tennessee Business Roundtable.  Joelle also chairs the Drive to 55 Alliance, a group of Tennessee’s largest employers who are working with the Haslam administration on strategies to equip more Tennesseans with college degrees or technical certifications.

Joelle hails from Auburn, Alabama.  Her family moved to Auburn when her father joined the electrical engineering faculty, teaching there for 35 years.  Her mother still lives in the house on Green Street where Joelle grew up. “While I think of it as home in many ways,” she says, “visiting is bittersweet. There are so many reminders of my father, and we all miss him terribly.”  She remembers some very good advice her father gave her not to dwell on sad things.  “That’s different from not considering, evaluating, remembering or investigating things that are sad. I think he was right that ‘dwelling’ on sad things is just damaging – and there’s a grave risk of getting stuck there.”  One bad habit she has?  “I sometimes dwell on sad things.”

With the holidays coming, she’s thinking about things that make her happy – like her mother’s pralines.  “Everything about them is perfect – the aroma of sugar at the exact right moment (the moment that I would miss and catch the stove on fire), the smooth texture that you can’t believe used to be granulated sugar and the way the taste reminds me of every happy Christmas memory.”  She’s also been reading and thinking about the history of innovation in our country – yes, this puts her in a great mood!  “I’m inspired by the optimism of the American engineers and scientists who’ve changed our world.  My father had that same confidence that problems can be solved when approached with due care and effort.”

Today, Joelle shares her thoughts on The Chip, by T.R. Reid.- a read that can remind us all of the humanity in technology. 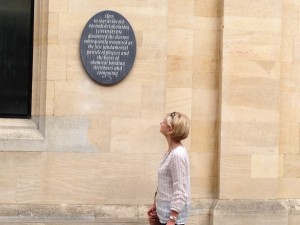 At the Old Cavendish laboratory

On a recent trip to England, I visited the Old Cavendish laboratory.  I wanted to stand in the place where the digital age began.  There is a small plaque marking the spot where J.J. Thomson discovered the electron.  That’s the spot where he solved the mystery of the “Edison effect” and opened the door to the transistor, the integrated circuit, the microchip and an endless list of engineering innovations.

I used my smart phone – one of the devices made possible as a result of Thomson’s discovery – to snap a picture and text it to friends and co-workers back in the States.  One of my colleagues, a bit of a wag, replied: “Nerds across the pond, installment one.”

I guess it takes a storyteller with the talent of T.R. Reid to translate the awe I felt standing outside the Old Cavendish laboratory.  It was Reid’s book, The Chip, which inspired me to reroute our travels and make that pilgrimage to Cambridge.  In The Chip, Reid weaves together the stories of engineers and scientists whose innovations and discoveries delivered the technology of the digital era.  That technology has become so integral to my life – and maybe to yours as well – that it is nearly invisible, hard to feel and easy to forget even as I use it.  Even if technology doesn’t pique your curiosity, Reid will draw you in with unexpected plot twists and engaging characters.  All of it true. 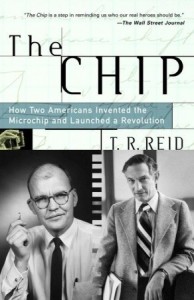 The Chip tells the story of two engineers – working separately and miles apart – who each came to the same revolutionary idea about how to solve the world’s most perplexing and limiting engineering problem.  Their solution made possible everything that allows you to enjoy BaconOnTheBookshelf – your computer, the internet, wired and wireless broadband.

At first blush, Reid’s book is a history of the scientific discoveries and engineering innovations that produced the modern digital world.  But there’s more to it.  Beyond the nuts and bolts (and semiconducting silicon) of the physical world, the story is also about the metaphysical – the human processes of problem solving, collaboration and experimentation.  It’s this aspect of the book that will engage even the least tech-centric of readers.

Reid’s was one in a stack of books on tech topics that I collected when I took on my current job at AT&T.   Professional interest led me to The Chip, but I connected to the story on a surprisingly emotional level.

My father was an electrical engineer, and I found so much of him in Reid’s descriptions of both Jack Kilby and Robert Noyce – the two engineers who share the starring role in The Chip.

When my father died, the deepest part of my grief was the sense that he’d disappeared, that he was imperceptible in the things that remained after.  In the years since then, I’ve looked for him in things that he touched, including the technology that was the focus of his career.  That search sparked a fascination with the engineering accomplishments underlying the telecommunications business, and it changed my career path.  Reid’s picture of Kilby and Noyce reveals the men inside the technology that is their legacy.  As Reid tells it, their story emphasizes that people – not machines – are the most fascinating and significant aspect of technology.

Pioneers, inventors and innovators of even the most groundbreaking marvels fade so rapidly from our consciousness.  We adopt – and adapt – quickly.  We stop thinking about the person who made the calculator or iPhone work.  Another great telecom story-teller, Jon Gertner, laments this fact in The Idea Factory: Bell Labs and the Great Age of American Innovation (another great read).  Gertner relies on the arrestingly poetic words of Bell Labs’ engineer John Pierce:  ‘In general, we are no more sentimental about the relics of science and technology than Shakespeare’s contemporaries were about his house and possessions,’ Pierce wrote in an unpublished essay from 1959. ‘What mementos will our heirs have of our romantic present to tell them that men created the things which they take for granted?’

When I tell people that I work in telecom, they frequently respond by describing their wariness of technology or by sharing their concern that our world has become too tech-focused, too much machine-kind and not enough mankind.  Reid’s story answers those concerns by showing the humanity in technology.

The technology engineered by Jack Kilby and Robert Noyce is the residue of human creativity and innovation that defines our romantic present.

That’s at least the opinion of one traveling nerd.