“If you wish to achieve Beatle-level success in your field, you must first learn to think like a Beatle,” write authors George Cassidy and Richard Courtney in their terrific book, Come Together: The Business Wisdom of the Beatles.  Preposterous, right?  Who has the hubris to aim for Beatle-level success?  This absolutely delightful book makes you think you could and should.  In its unique and humorous manner, Come Together offers advice on how to figure out your calling, start your business, play well with others, avoid some big mistakes, plan for the future, and live a good life.  (You learn a lot about the Beatles along the way.)  Come Together is one of the most unusual books I’ve ever read – making a splash in the New York Times when it was first published in 2011 – and in this gift-giving season, I’d like to add my enthusiastic endorsement.

Come Together reads like a dream, in 100 concise chapters with titles like “A Little Help from Your Friends,” “Fire Yourself and Hire a Manager,” “Taxman,” “Laying an Egg,” and “If You’ve Got Trouble.”  Cassidy and Courtney never shy away from an opportunity to work in a song lyric, which adds to the sense that the book was written by people having a great time doing so.

Solid business advice seems to be on offer in this book (though as I’ve never run a business, I can’t say for sure).  As a formerly practicing lawyer, I can attest that excellent legal advice is dispensed.  I particularly liked the chapter counseling the importance of exit strategies at the beginning of a venture – and if not then, certainly when things are still fabulously successful and there is no end in sight.

Cassidy and Courtney state in all seriousness that “the premise of the book is simple: the steps that the Beatles took to become the most successful rock band of all time can be successfully applied to any business venture.”  I’m not sure I’d call the premise “simple.”  I might call it – and the book – audacious. 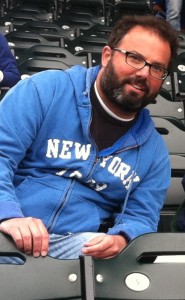 George Cassidy has been a quietly audacious friend of mine for 25 years.  I knew him in college as my good friend Hannah’s rocker boyfriend; they’re now married and living in Nashville with two young sons.  When reflecting on our college experience at Harvard, he remembers one professor in particular, William Alfred:  “He realized that I hadn’t really learned much of value in the English department yet, so he gently set about putting me right.  The poet Seamus Heaney read my senior thesis, and pointedly called it ‘a bit short.’  I thought, ‘Man, I’m on to something if Seamus Heaney just can’t get enough!’”

George was born in New York and says that in some sense he’ll always be a New Yorker.  He marvels at things he once took for granted, like the vault of stars on the ceiling of Grand Central Station. “But they keep gratuitously renaming things for Kennedys.  And, as someone reared in Queens, I am somewhat mystified by the current vogue for all things Brooklyn.”  George had a happy childhood as a Queens street urchin –  “you’re fending for yourself on the playground and in the alleys for hours at a stretch.  Music and comic books provide the counterpoint.  If you read Jonathan Lethem’s Fortress of Solitude, though it’s not set in Queens, he gets the atmosphere just right.”

These days, Nashville is definitely home base.  George consults at Deloitte, writes music and books, and helps raise the boys.  He loves to make breakfast for the family.  He sometimes thinks he would be very happy working as a grill cook, “like SpongeBob Squarepants.”

Possibly the best meal he’s ever eaten was at Disney World at a recreation of LA’s Brown Derby restaurant.  “It was an andouille-crusted prawn over wilted greens and a glass of Cakebread Chardonnay.  Not very manly, but there it is.”  George makes me laugh, over dinners shared for many years and in Come Together.

Tune in tomorrow for his post on A Prince Among Stones, by Prince Rupert Loewenstein.  I’m so delighted to feature George and Come Together this week at Bacon!