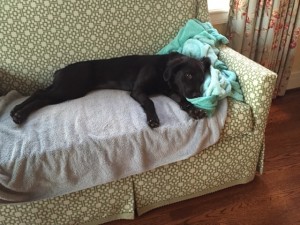 Pepper and I had a heart-to-heart following her “graduation” from puppy training.  We went with our trainer to PetSmart, where Pepper was supposed to demonstrate all she had learned in the last three months, including sit, stay, leave it, drop it, come and compliant loose leash walking.  She was also supposed to show off her good manners towards people and dogs.

Well, Pepper had her own ideas about what she wanted to do at PetSmart – and they did not include sit, stay, or manners.  They did include leaping, bounding, jumping, and generally bringing her most enthusiastic party girl self to every encounter and every corner of the store.  Our trainer was disappointed, bordering on aggrieved.  What had we done with all she had taught us?  Had we practiced anything at all?  Peppy and I felt deflated.  We hadn’t done even one thing right.  We left in abject failure, tails between our legs.

“But… somehow I couldn’t do them when it mattered,” she replied, the absolute picture of doggy dejection.

“We failed utterly,” she concurred. 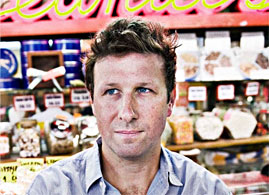 We felt sorry for ourselves for a while, but then Pepper remembered an article she’d read at Chapter16.org last week.  “At least we didn’t fail as badly as Adam Ross,” she said, “which is some consolation.”

“Peppy, I’m not sure that’s a very generous sentiment!  Are you talking about Adam Ross, former Harpeth Hall teacher, author of the acclaimed Mr. Peanut and Ladies and Gentlemen?  He’s had tremendous success…”

“Yes, that Adam Ross,” she replied. “And he had a lot of failure as a puppy.  Using the magic alchemy of the most gifted of writers, he turned it into a work of dark humor and encouragement, flavored with humility and tough love.”  She pulled out her ipad and began reading aloud:

“Generally speaking I’m a generalist.  I know a little about a lot, but at this moment of new resolutions and fresh beginnings, I offer my thoughts on the only subject in which I’m an expert: failure.

That’s right: failure.  Defined as follows: to fall short of success or achievement in something expected, attempted, or desired.  From the Latin, fallire: to disappoint or deceive.  I write these words as a man with a Ph.D. in failure, and I commenced my subject’s study on the day I decided to become a writer, a life-changing choice I made in 1986, after taking a creative-writing class my sophomore year at Vassar College.  How many times did I fail?  Let me count the ways.

I failed right out of the blocks.  My writing instructor that fateful sophomore year, Paul Russell, accepted me into his seminar based, he later told me, on one sentence I’d written – just one – in a very long story which was such a train wreck he was forced to take extended breaks to sit on his patio, a stiff drink in hand, and contemplate whether or not he’d wasted his life in choosing teaching as a career.  Spurred by his confidence, I wrote ceaselessly after that…”

Please check in at chapter16.org for the rest of Ross’s kickass essay on failure.

After Pepper finished, she nestled in close.  “I love you even when you fail at training me,” she said.

“And I love you even when you fail at listening to me,” I replied, giving her belly scratches.  We agreed that failure could lead many places.