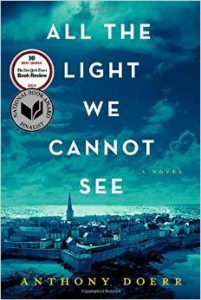 All The Light We Cannot See is taking flight like The Goldfinch.  It seems like everyone I know picked it up over Christmas if they hadn’t before.  Set during World War II, it is the story of a blind girl in France and an orphan boy in Germany whose lives – finally – intersect after an entire war’s series of events bring them to the same small room.  All The Light We Cannot See has dramatic momentum and a conclusion that leaves you reeling; it is historical fiction at its very best.

But all good things – and all good books – must come to an end.  A Friend of Bacon recently finished the novel and mournfully asked, “What in the world can follow this?”

It got me thinking.  The most compelling book I’ve read this year (admittedly it’s still a new year) is The Narrow Road to the Deep North, by Richard Flanagan, also set during World War II.  I’m not the only one admiring it:  it recently won the Booker Prize for 2014.  It seems to me a novel that CAN follow All the Light We Cannot See and not suffer by comparison. 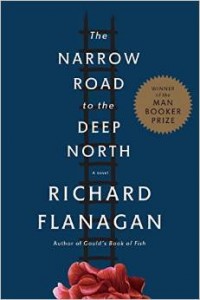 Flanagan’s novel tells the story of men in a Japanese POW camp in 1943.  Japan in 1943 still had grand visions of empire and had set about building a railway to support its forces in Burma (immortalized in the film Bridge over the River Kwai).  Built by approximately a quarter million Allied POWs, Tamils, Chinese, Javanese, Malayans, Thais, and Burmese, the Thai-Burma Railway was known simply as “the Line” by the POWs who worked on it:  “Forever after, there were for them only two sorts of men: the men who were on the Line, and the rest of humanity, who were not.”

In the particular camp where this book is set, the Japanese compel about 1000 Australian prisoners of war to work as “slave labor.”  By the war’s end, many have died (and some lived) in conditions as terrible as anything I’ve been exposed to in history, biography, memoir, or film.  This can make for painful reading – but it is not only a story of suffering.

The Narrow Road to the Deep North is in many ways a story of what people can endure and what they can hope.  It is also a window into Japanese culture at a particular moment in time and the ideals that could lead to such cruelty.

This novel has a wide cast of characters, but central is Dorrigo Evans, an Australian from a tiny, impoverished town on the island of Tasmania.  He is smart, the only boy in his community selected for state-sponsored education beginning at age 12, and his education provides his ticket up and out.  As a surgeon, he becomes engaged to the daughter of a prominent family – yet a further step in his social and economic advancement – but not before he has fallen in love with someone else.  (In addition to everything else, The Narrow Road to the Deep North is a love story.)

Dorrigo enlists when war begins, and much of the novel involves his time as a leader at the prison camp:  “The men called Dorrigo Evans Colonel to his face and the Big Fella everywhere else.  There were moments when the Big Fella felt far too small for all that they now wanted him to bear… It was a part he felt himself feeling his way into, and the longer it went on, the more the men around him confirmed him in his role.  It was as if they were willing him into being…And with him now in tow, they together staggered through those days that built like a scream that never ended, a wet, green shriek…”

The novel doesn’t end with the war’s end.  It follows Dorrigo, some of his fellow soldiers, and some of their captors back to Australia and Japan, respectively – to the end of their days.  Some endings seem just, others less so.

Throughout the novel, there is a tension between the attempt to understand the world – especially the horrors of war – and the inadequacy of all such attempts to understand them or find meaning in them.  Of the many questions posed, I couldn’t get one off my mind:  Is it possible that sometimes forgetting is better than remembering, individually if not at the societal level?  Are all forms of societal remembering so warped and incomplete that they too come under question?  It seems radical to even suggest that remembering is not always the right answer.  If you are absolutely certain you know the right answer to this question, you might consider reading this book.

This book also asks about the possible meaning or significance of extreme suffering.  “Dorrigo Evans was increasingly haunted by the thought that it was only the men who died on the Line [who mattered in the end].  He feared that only in them was the terrible perfection of suffering and knowledge that made one fully human.”  I cannot help but hear the lines in the hymn – “See from his head, his hands, his feet, Sorrow and love flow mingled down, Did e’er such love and sorrow meet?” – though Dorrigo finds no consolation there.

All the Light We Cannot See is a powerful story of love and suffering – as is The Narrow Road to the Deep North.  (Magnified. Darker.)  Maybe all the great stories are.