This may be bloodier than Game of Thrones.  I’m going but expecting the worst.  Please join me tomorrow night for an evening that may horrify and/or delight!  Other cities enjoying the Literary Death Match in April and May include Austin, Los Angeles, Boston, and London (participants vary by city). 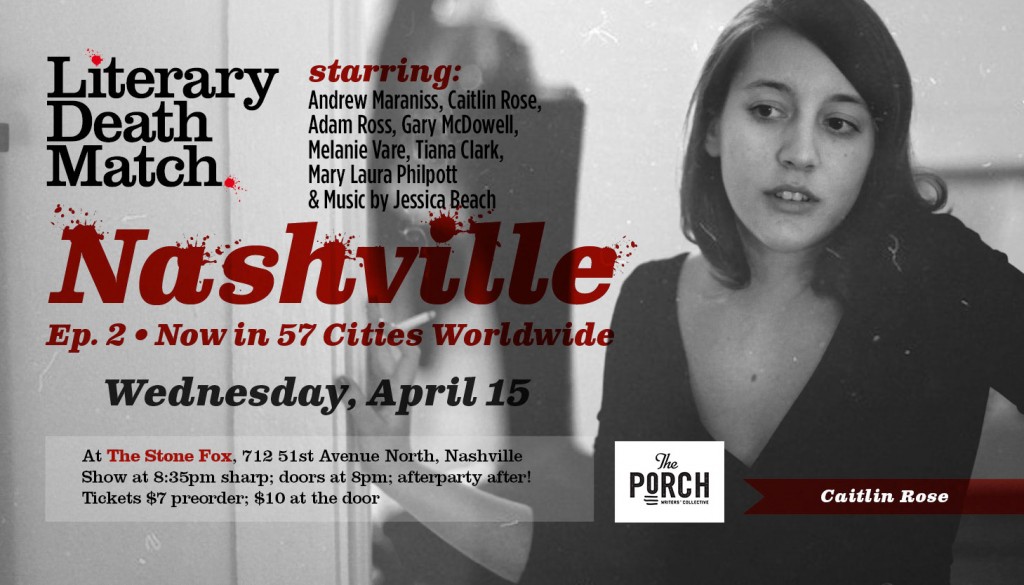 Here’s what the organizers have to say:

After an electric October debut, Literary Death Match is teaming with The Porch Writers’ Collective for our return to Nashville – the front-runner for our City of the Year in 2015! – for a madcap event at The Stone Fox that will wow, awe, confuse and titillate.  Preorder now!

What is Literary Death Match?  Four writers read their own work for seven minutes or less, and are then judged by three all-star judges.  Two finalists are chosen to compete in the Literary Death Match finale, a vaguely-literary game to decide the ultimate winner.

Performance: Caitlin Rose, country singer and mind behind the albums The Stand-In and Own Side Now

Intangibles: Mary Laura Philpott, editor of Parnassus’ Musing blog & producer of I Miss You When I Blink

* Adam Ross, author of Mr. Peanut and Ladies and Gentleman

* Gary McDowell, multi-award winning poet and author of Weeping at a Stranger’s Funeral

* Melanie Vare, comedy writer, comedian, and creator/host of That Time of the Month

“I suppose I walk that line between comedy and cruelty because I think one illuminates the other.  We’re all cruel, aren’t we?  We are all extreme in one way or another at times and that’s what drama, since the Greeks, has dealt with.”