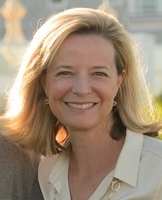 Desire takes many forms.  Dallas Wilt has a desire to be free.

“At the beginning of this academic year,” she says, “I established 2014-15 as the ‘put a bow on it’ year.  My goals were to finish what I had already started and not to take on any new non-profit initiatives.  Basically, I wanted to ‘put a bow’ on my existing projects and clear my plate completely, in an effort to really focus on how I want to spend my time going forward.  In October, I retired from the Washington and Lee Board of Trustees after 9 years of service.  In May, I will wrap up the fundraising for my 25th college reunion, my work on the capital campaign for Nashville Ballet’s new building, and the completion of construction of our new home.  I am looking forward to a fun summer of travel and getting settled into our house, as I look around to see what I want to do with my newly found bandwidth!  I have not experienced a clean slate or a clear plate since I was 5 years old and I could not be more excited about it!  I’m hoping to reenter the business world in some capacity, though I have no idea what that might be.

It’s incredibly freeing (and slightly frightening) to be open to an entirely new industry in which I have no experience.  When I floated the idea of going back to work to my youngest daughter and asked her what she thought I should do, she said, “Well, what are you good at?”  As I wracked my brain for an answer that would be both true and not horrifically boring to an 8-year-old, she added, “What do you LIKE to do?” – which equally stumped me.  I realized that, in addition to dusting off my resume, over 25 years old, I need to work on my interview skills!”

I’m not worried about Dallas’ interview skills.  That girlfriend just radiates smarts and charisma!  Finding the next right thing:  harder.  She’s done the first right thing in my opinion, in claiming the time and space to figure it out.

Edith Wharton, writing in the early 20th century, thought a lot about women’s choices.  Today, Dallas shares her thoughts on Edith Wharton’s House of Mirth and The Age of Desire, by Nashville author Jennie Fields. 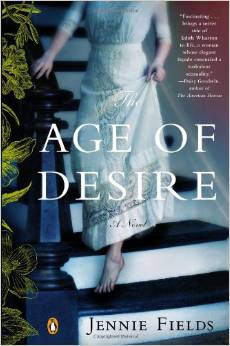 2014 was the year of the local author for my book club.  It was so much fun!  We read books by local authors and asked them to join our club for discussion.  We were joined by Katie McDougall (The Color Wheel), JT Ellison (When Shadows Fall) and Don Winston (The Union Club).  Holly Conner recommended another local author, Jennie Fields, whom she had just hosted at her book club.  I knew a recommendation from Holly was worth its weight in gold, so I quickly reached out to Jennie about a visit to our club to finish up the year.  We read her most recent novel, The Age of Desire, which is based on the life of American author Edith Wharton.

Jennie moved to Nashville about 5 years ago, after spending a good part of her career in New York as an ad agency exec.  She is infectiously passionate about the subject of her novel, Edith Wharton, and we learned about the massive amounts of research she undertook to immerse herself in Wharton’s world in preparation for writing.  Jennie was among the first people to have access to over a  hundred previously unknown letters from Wharton to her literary secretary and lifelong friend, Anna Bahlmann.  The letters came up for auction at Christie’s just as Jennie had decided to write the novel from both Edith’s and Anna’s perspectives, and they provided tremendous insight into the lives of both women.

I love reading books that transport you to another time and place, and The Age of Desire does just that.  Set in early 20th century New York and Paris, the novel follows Edith Wharton’s life after she published House of Mirth, and it centers on her relationship with her husband Teddy Wharton, her affair with journalist Morton Fullerton, and the negative impact her actions have on her relationship with Anna Bahlmann.  The writing is very descriptive, and Fields does a great job of delivering the emotions of her characters to the reader.  In describing the sinking feeling that comes from a romantic disappointment, Fields writes “Elation collapses like a soufflé snatched clumsily from an oven.”  If you’ve ever had your heart broken or tried to take a soufflé out of the oven too quickly, you know exactly what she means!  Although there are many themes that run through Age of Desire – loveless marriage, romantic affairs, societal pressures, and betrayals – the one that resounds the most is of a beautiful friendship between two women that ultimately triumphs over all.

While discussing her book, Jennie mentioned that House of Mirth was her favorite novel by Wharton.  I couldn’t understand why, if House of Mirth was so great, I hadn’t been urged to read it in high school.  My vague recollection of Wharton’s writing was from Ethan Frome, which I had slogged through junior year.  It was not a positive memory.  So, emboldened by Jennie’s passion for Wharton and her love of House of Mirth, I picked up a copy to read. 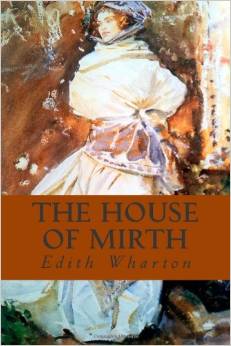 The forward for House of Mirth was so dry I had to abandon it on the second page and skip right to the first page of the novel.  I worried that it would be a long week.  What I found, though, was a fascinating depiction of life in early 20th century New York – a time when old and new blood were blurring together and social stature required more than just money or proper lineage.  I realized, almost immediately, why a college prep school for girls in the 1980s (Harpeth Hall) wasn’t inclined to encourage reading about life for women in 1905, lest we race right out in a mad panic to find a suitable husband!

In House of Mirth, Edith Wharton eloquently describes the plight of many women in the early 20th century.  Bound by societal norms and rules, women of a certain strata were relegated to predetermined roles, even if those roles were undesired.  The book reminded me of something I DID read in high school, from Shakespeare’s As You Like It: “All the world’s a stage, and all the men and women merely players.”  Wharton goes into great detail to describe how the protagonist, Lily Bart, comes to recognize the “mirth-seeking” society to which she has been consigned is not all glitter and gold.  Lily has the sense of “being behind the social tapestry, on the side where the threads were knotted and the loose ends hung.”  Wharton goes on to describe the society as an “overheated, overupholstered world, the human members of which are uncannily devoid of real existence.”  The theme of social conduct as theater and socialites as actors and actresses is repeated throughout the novel, and it is painful to watch Lily become disillusioned with the world she once thought so glamorous.  There are so many men and women behaving badly in House of Mirth (extra-marital affairs, social posturing, gluttony, gossip, and backstabbing) it is almost comical, if it weren’t so tragic and painfully true!

I think the most suffocating part of the novel for me was when Lily, having failed to properly secure herself through marriage, attempts to make a living in a hat shop but finds her skill set lacking.  “Since she had been brought up to be ornamental, she could hardly blame herself for failing to serve any practical purpose; but the discovery put an end to her consoling sense of universal efficiency.”  House of Mirth made me think about a lot of things, but mostly it made me want to go back to work!  I swear I could hardly breathe while reading about Lily’s inability to support herself.  She thought “there are thousands and thousands of women trying to do the same thing already, and not one of the number who has less idea how to earn a dollar than I have.”  I loved the way Wharton describes Lily as being “stranded in a great waste of disoccupation” and notes that “one of the surprises of her unoccupied state was the discovery that time, when it is left to itself and no definite demands are made on it, cannot be trusted to move at any recognized pace.  Usually it loiters; but just when one has come to count upon its slowness, it may suddenly break into a wild irrational gallop.”  I think we can all relate to that. 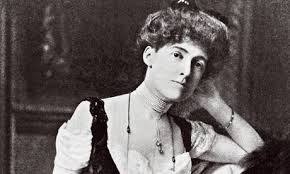 Edith Wharton
Image from The Guardian

Wharton seemingly has such a great grasp on the perverse nature of society as one big play and she depicts many of the players as such buffoons, that it made me wonder how she could have been so naïve in her own life.  In Age of Desire, which is based on Wharton’s life after she had written House of Mirth, Fields describes Wharton as “encased in her sexless, empty marriage,” bound by the same societal rules she so eloquently condemns in House of Mirth.  Fields even makes mention of the disparity in the book: “How little Edith knows about being the object of interest.  She wrote about Lily Bart, who drew men to her like gnats to a fruit bowl, but she has no experience of her own.”  Regardless of the inconsistency of Edith Wharton’s ability to shine such an unflattering light on a certain strata of society, yet inability to personally escape its restrictive claws, I thought both Fields and Wharton did a wonderful job of placing me squarely in the beginning of the last century inside a social stratosphere I would otherwise (and thankfully) know nothing about.

As I take my daughters to New York this weekend, I will marvel at the beautiful homes, the social clubs and the ladies in the hat shops.  I will also be grateful that my daughters will grow up in a less repressive time for women.  I do think I will recommend House of Mirth to them in high school, though.  There is much to be gleaned from the notion of society as a stage and some of the less than authentic acts that are on display there (including some unsavory roles of my own).  I will also recommend The Age of Desire to them, as every girl should learn that no man is worth sacrificing a great friendship!  Thank you, Jennie Fields, for bringing an entire era to life for me and for reminding me what is most important – then and now.

For more from Dallas, please check out her prior post (on Katie McDougall’s The Color Wheel) here.