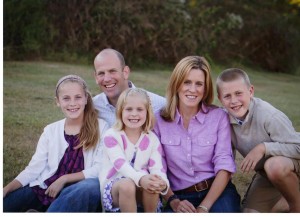 Timiny Braemer strikes me as fearless.  Friendly?  Yes.  Kind?  Yes.  Also fearless.  “No question!” laughs her buddy, Daphne Butler.  “And she is so darn capable.  If she wanted to, Timiny could run a Fortune 500 company, hike the Matterhorn with skis on her back, or have her own cooking show on the Food Network.  For now she is content in her role as mom and wife, and she is very good at it – like everything else she puts her mind to.”

Timiny, her husband, David, and their three kids moved to Nashville almost three years ago for him to become the new Head of Ensworth School.  They moved from Dallas, where they had lived for nine years.  They are thrilled to be here!  Timiny loves the families they’ve met and all the green spaces in Nashville, though she wouldn’t mind a few more sidewalks in the neighborhoods. 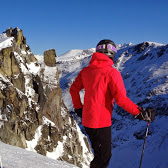 Having grown up in Vermont, she’s an avid skier who loves a cold, sunny day on the slopes and knows how to layer like a pro.  “Growing up in Vermont taught me to never take a sunny day for granted – warm or cold,” she says.

Timiny is a “superior athlete,” says Daphne, who joined her one day recently at Climb Nashville: “Picture me dangling exhausted from a Climb Nashville wall as Timiny effortlessly scampers past!”  They recently played in an Ensworth tennis tournament together, and Timiny suggested they wear this: 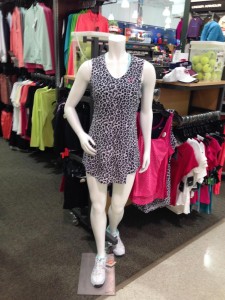 Daphne had to put the brakes on that.  (Okay, we’re not sure she meant it!)

Timiny is always game to try something new.  When she arrived in town, she took up the guitar.   A year of guitar lessons here plus many years of piano lessons as a child have led her to fear that she simply lacks innate musical ability.  “To the gifted, music seems to just make sense.  I would love to be able to experience that feeling of music just making sense.”

Enjoying parenthood just makes sense to her.  She loves playing games with the kids – ball games, card games, board games.  She didn’t love the pretend games when the kids were very young quite as much  – “Does that make me a bad parent?”  (My opinion – no!)  She feels strongly about one important aspect of parenting:  “My parents made my two brothers and me eat liver and eggplant, the one vegetable I still cannot stand eating.  No one should ever have to eat liver or eggplant!”  David stands behind her on that and many other things.  Timiny appreciates her dad’s excellent advice on marriage.  “Since marriage is at least 50% luck, you had better be darn sure about the part you can control,” he told her.  “My dad’s advice led me to the best decision of my life,” she says.

Timiny often has a biography or work of nonfiction on the nightstand table, and her favorite author is John Krakauer.  “He helps me understand what makes some people tick.  I seem to always wander back to books about mountaineering, and Krakauer’s books on this subject are a few of the best.  Although I have no interest in summiting the high peaks myself (I value my fingers and toes too much), I find the people who do, their motivations and stories, endlessly captivating.”

Today, Timiny shares her thoughts on a recent great read, Patti Smith’s Just Kids.  Breaking new ground at Bacon, she’s written her reflection in the form of a letter… 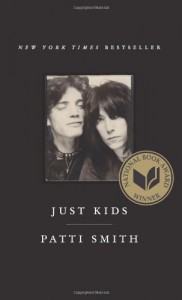 My life could not be much more different than your life, Patti Smith.  (To me, your identity is locked in your first and last name together, unlike Cher or Madonna.)  Nevertheless, I have always respected and envied people like you for whom art is required to live as much as food, water and air.  I understand that urge.  I don’t have it, but I see it in people and hope that in my next life I will be given that consuming need to create.  You explained that need simply, “I drew no line between life and art.”  Your story allowed me to walk beside you and almost experience that dedication to art as life.

Your expertly curated book, or rather, work of art, helped me to step onto the gritty streets of New York in 1967, wander the halls of the artist-filled Chelsea Hotel, share a hot dog on the pier at Coney Island with Robert Mapplethorpe and feel my scalp crawl as you dealt with ridding yourself of lice three times (yuck).  I got to watch you weave from poetry to writing, to drawing, to ultimately landing on the CBGB stage as a rocker of your own definition.  I was able to see you and Robert navigate drugs and sexuality in conjunction with art and personal expression.  Finally, I witnessed the achievement of becoming highly acclaimed artists born from your committed relationship and ultimately the shared pain of Robert’s death from AIDS-related complications.

Thank you for including the photographs in your book.  They are captivating.  I would return to various photos as I came to understand Robert’s sensibility and vision.  As a college student, I went to a showing of Robert Mapplethorpe’s work.  In all honesty, I went to the display because of alI the controversy surrounding his subject material.  I walked away from the exhibit not understanding the appeal of the work and uncomfortable with the images seared in my brain.  Twenty-five years later, your story helped me contextualize those images.  I still do not want one hanging in my living room, but I also know now that Robert never expected everyone to like his work.  I get it now.  You explained Robert’s art and I am sure I am not the only one who benefited from your explanation.  Given that success, both immediate and enduring, was so clearly important to him, he would have appreciated your role in elevating his art twenty years after his death.  Regardless of my feelings toward his sexually graphic material, I love his photographs of you as they are so representative of both you and Robert.

You and Robert vowed to “never leave one another again, until we both knew we were ready to stand on our own.”  Robert’s death did not release you from this vow.  He made you take a second vow to him to tell your shared story.  Robert would undoubtedly view this novel as a collaborative art work.  It reads like you wrote it together detail by minute detail as it happened, and then you masterfully edited out pieces until you had created a story with just the right elements.  I am amazed at your ability to recall how you chose your clothing and who you were thinking about high on weed.  I suppose that is what makes any artist great – the ability to edit to clear perfection.  I hope you and Robert continue to collaborate.

You wrote a story that rightfully could begin with “Once upon a time…”  Your story deserves the kind of illumination that those four words shine on a time, place, people and journey.  While that phrase is usually reserved for fairy tales, your story can use it.  You left me with great wonder and desire for a time and a place where you and Robert were just kids.

I am sorry for your loss.

With much gratitude,
Timiny Braemer