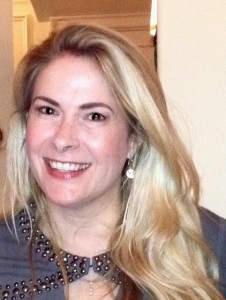 I once had the chance to hear Paige Bainbridge sing with Holly Williams (daughter of Hank Williams Jr.) at Blackberry Farm.  Outdoors at Yallerhammer, under the stars, Holly asked for a bit of help from the audience.  I volunteered my friend Paige – and you could hear the collective gasp when Paige started harmonizing.  Holly herself looked as surprised as a performer can be mid-song.  They shared the stage the rest of the evening, which I remember now like a dream.

You might have missed Paige at Blackberry Farm, but you’ve likely heard her sing with the Pat Patrick Orchestra, fronting that band on many occasions.  I like to hear her “sing” at the Pilates class she teaches.  For years, I’ve been addicted to it, mostly so I can hear her talk us through the class in that lilting, encouraging voice.  She’s got the kind of voice that she looks like she should have:  rich; glorious; gorgeous.

In addition to her studies, Paige sang her way through Chapel Hill in local bars; she and her friend and singing partner Robin Roseberry formed “She Said,” often advertised as “two girls, two guitars, two dollars.”  After college, she spent a year traveling the world, singing on street corners.  Then it was back to Nashville where she married a local fella who had attended Chapel Hill a few years before her, Bill Bainbridge.  Paige is awfully sweet about Bill.  “I married him because I couldn’t imagine life without him,” she says simply, 19 years in and two terrific sons later.

Her dear friend Kate Satz has fond memories of time spent with Paige at Harpeth Hall, the foundation of their deep friendship.  “Paige and I met in the 6th grade,” she tells me.  “She was tall with long hair, carefully curled and neatly clipped in barrettes. She had her own sense of uniform style – matching knee socks and sweater every day – perfectly coordinated around that Harpeth Hall kilt.  No one else dared try this look because only she could rock it.  She had a Clark Kent thing going, too, often wearing thick-rimmed eyeglasses that disguised what a looker she was – until she pulled them off.  By high school, she was all about contact lenses!”  Paige was elected Lady of the Hall by her peers senior year, a great honor then and now.

“Most distinctive about Paige,” Kate continues, “and consistent in every aspect of her life, is a gracious, disarming independence of spirit.  This girl grew up in a sheltered Southern environment and graced numerous debutante balls – yet literally sang her way around the world for a year after college graduation.  This woman who is a Steeplechase regular and always game for a girls’ night out celebrated her 40th birthday with an overnight retreat to a monastery with only a stack of inspirational books.  She has always followed the beat of her own drum, even within highly traditional environments, warming every single person she meets with that glorious smile.”

Today, I’m so delighted for Paige to share her thoughts on Special Topics in Calamity Physics, by Marisha Pessl. 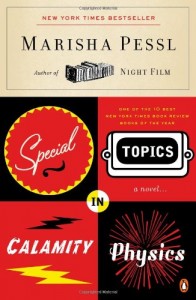 I’m embarrassed to admit this (my husband counsels me that I shouldn’t), but I have been known to be a last-page-first reader.  There is probably a better term for this condition, but last-page-first describes how I sometimes delve into a book.  Like most of us with less than healthy habits, it started out small and snowballed into the real addiction.  I was reading, say, Daphne Du Maurier’s Rebecca in high school, and near the end of the book I couldn’t stand not knowing the ending.  Would there be a Cinderella-esque final scene at Manderley?  Why is Mrs. Danvers so creepy?  Then I thought, “well why don’t I just look and see?”  So I turned to the end and read the last page (or two).  Then I flipped back to my place to see how Du Maurier got us there.

Sometime in college, my need-to-know-now-ness had grown such that when picking up a book, I’d simply turn to the last page first and read that.  Then I’d go back and start on page one to follow the journey to the endpoint to which I was now privy, like I was part of a secret society.  In my defense, I think it’s partly genetic, as my grandmother couldn’t watch a movie or tv show without asking you “Who is that?” or “What’s happening now?”  I wish I’d inherited her extremely green thumb instead but no such luck.

Thankfully, Marisha Pessl understands my affliction; she takes care of those of us with insatiable curiosity in her book Special Topics in Calamity Physics.  She starts off in the first chapter letting us know from the perspective of Blue, our first-person narrator, about two key events:  “Before I tell you about Hannah Schneider’s death, I’ll tell you about my mother’s.” Here we are right away given an ending: we don’t know who Hannah Schneider is, but we know she died and we can delve into the book to learn about how it happened.  Also, we learn, as every good Disney-formula from “Bambi” to “The Parent Trap” illustrates, that Blue is motherless.

When I first saw Special Topics on a booklist, I figured it must be a Zen and the Art of Motorcycle Maintenance type of thing, a work of fiction that uses quarks and physics to talk about life philosophy.  While I am all for the quark-life lit, I never seemed to want to grab for Special Topics as my beach read.  How wrong I was; Special Topics makes a great beach or anytime read.  The title is misleading; and while you may feel smug spouting it off at a cocktail party (“What are you reading these days?”  “Oh, Special Topics in Calamity Physics – and YOU?”), it’s every bit the page-turner that Gone Girl is, while also written with clever and interesting characterizations.  Special Topics contains everything I love about reading.

The story centers around Blue, a high school senior, and her father, a liberal left-wing traveling college professor of sorts.  Blue spent her youth accompanying her father all around the country for his temporary professorships at smaller, more off-beat universities.  Most of the plot takes place during Blue’s senior year in Stockton (mimicking Asheville), North Carolina.  Blue is befriended by the popular, beautiful clique at school, the Bluebloods, as well as their eccentric film studies teacher who becomes their mentor and friend, Hannah Schneider.  In Special Topics, Blue is writing about the events that took place that senior year, and she decides to structure her writing as her father always advised her: “annotate and footnote at length.”  This literary device leads to some colorful and witty descriptions throughout:

Then I heard someone gasp – it was Donnamara Chase sitting behind me; she needed  smelling salts – and most of the school, including a few teachers, swiveled around to watch the five of them saunter in, single file and self-loving (see Abbey Road, The Beatles, 1969).

A further nod to her academic father is in the titles Blue chooses for each chapter, named after great literary works: Chapter #1: OTHELLO, William Shakespeare.  Chapter #2: A PORTRAIT OF THE ARTIST AS A YOUNG MAN, James Joyce.  Chapter #3: WUTHERING HEIGHTS, Emily Bronte.

Special Topics was Pessl’s debut novel, first published (after a bidding war) in 2006, and  it is all at once coming of age story/end of innocence, political theory, humorous and angst-ridden teenage portrait, mystery, and psychological thriller.  What impresses me is Pessl’s craft of sewing all these materials together with a current of an emotional thread that makes the ending all the more poignant.  The beauty of Pessl having her narrator as a teenager is in all the possibilities that opens up: Blue is experiencing so much of the world for the first time.  She’s guileless and trusting, so making miscalculations or mistakes is completely believable.

Upon my second reading of the book (for the purposes of writing this review), I could see how some critics believed Pessl’s use of metaphor and simile to be overdone.  I personally find her descriptions so unique and creative that their abundance does not annoy me, although it does take some getting used to the rhythm the story.  This language seems to fit in perfectly with the voice of Blue, our narrator: a highly educated and precocious yet still very naive and young woman.  I sometimes would have to go back and reread a paragraph to make sure I kept up with the plot line as I started getting swept away in the creative language of the metaphor:

I’d like to say I was the Jane Goodall, a fearless stranger in a stranger land doing (groundbreaking) work without disturbing the natural hierarchy of the universe.  But Dad said, based on his tribal experiences in Zambia, a title only has meaning when others fully support it, and I’m sure if someone asked the Tanned Sporto with Shiny Legs, she’d say if I had to be a Jane, I wasn’t the Jane Goodall, nor was I the Plain Jane, the Calamity Jane, the What Ever Happened to Baby Jane, and certainly not Jayne Mansfield.  I was more along the lines of the Pre-Rochester Jane Eyre, which she’d call by either of its pseudonyms, the I Don’t Know Who You’re Talking About or the Oh Yeah, Her.

Special Topics is often compared to Donna Tartt’s The Secret History, and there are similarities in the teenage, prep-school, mystery genre.  Pessl’s novel draws you in to Blue’s world and the mystery behind Hannah’s death, although admittedly it’s a bit of a slow beginning to get to that point.  But once you commit to getting the backstory in the first few chapters, you’re in for a fun read and a thoughtful portrait of a father-daughter relationship.  Blue reflects on all the difficult life lessons she’s learned in the last year, and Pessl makes us care about Blue and thus she’s able to build up to a highly emotional ending.  And it’s an ending which, though it was tempting, I am very glad I didn’t skip ahead and read first.