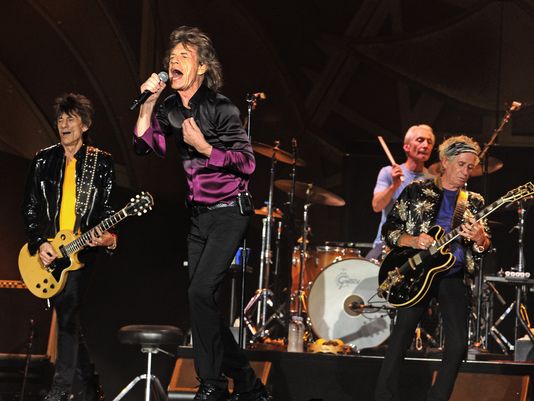 And from George Cassidy, author and rocker (reposted from December 2014): 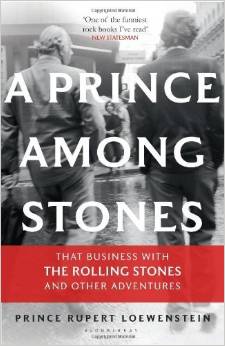 A Prince Among Stones by Prince Rupert Loewenstein has an evocative title and byline that could easily adorn an exotic work of fiction.  However, to paraphrase the old adage, it is something much stranger.  It is perhaps the most fascinating, offbeat book about the Rolling Stones – or any rock band – I have ever read, and I have read a lot of them.

The author may already be vaguely familiar to die-hard Stones fans as their financial advisor from 1969-2008.  His astutely titled book obviously plays on this association, and there is some juicy Stones business.  However, the greatest revelation is the sensibility of the man himself.

Loewenstein came of age at a fascinating moment for the titled aristocracy of Europe.  His parents were raised to disdain the world of “professions, commerce, ambitions, and struggle” – an attitude that, as the family fortune dwindled and died away to naught, took some doing to maintain.  Young Rupert himself, upon seeing his mother sell a painting by Balthus at a great loss to buy lunch at the Ritz, “developed a lasting determination never to find myself in the same straits as they navigated on a daily basis.”

After Oxford, Rupert became a stockbroker and then the part owner of a small merchant bank in London’s city center.  Through it all, he maintained a vigorous social schedule.  It was at one of many balls given by him and his wife Josephine that he first made the acquaintance of Mick Jagger in 1969.  In relatively short order, he began to advise Jagger and the Stones on how to disentangle themselves from the web of ill-advised contracts they had signed throughout the 60s.  This process took decades in itself, and provided the platform for a nearly 40-year association with the band that grew to encompass all their business affairs.

The famous French tax exile that produced their masterpiece double-album Exile on Main Street?  Prince Rupert’s doing: “By and large the South of France was the right place because we knew people on whom we could rely regarding the taxation side.  In those days, full exchange controls existed and it was most important to have this sorted out at the beginning of their residence if later they wished to leave.”  Naturally!

PRL’s broad mind and vast experience also enabled him to invent the modern, multi-level rock star meet-and-greet by reordering the backstage melee at a Stones concert along the lines of his long-ago audience with Pope Pius XII “at Castel Gandolfo, the Pope’s summer residence on the shores of Lake Albano, south-east of Rome.”

As the Stones begin to take up more and more of his time, Prince Rupert remains charmingly unimpressed by their music:  “When Mick was with friends of mine and brought out his guitar to play it, all the young people sat around absolutely loving it, while to me it was not a patch on a French guitarist I had heard playing at a nightclub and who had moved me far more…”  Or: “The Rolling Stones to me are like sausages and mash.”  As always with PRL, there is some sense behind the sensibility: he believed his indifference to their performances increased his levelheaded effectiveness as their financial advisor.

In fact, throughout the book, the reader will marvel at Loewenstein’s even-handed tolerance of all human folly – from the foibles of aristos or rock stars, to the impudence of his often hard-nosed and uncouth business rivals.  He characterizes his particular brand of equanimity, inherited from his father, as tenue, a French word that he avers “has no English equivalent able to convey so successfully that blend of emotional control, impeccable manners, elegant dress and correct posture.”  Although this may sound somewhat old-fashioned and surface-oriented to modern ears, one can easily see the benefits of this temperament in action throughout his long and storied life, and it’s hard not to admire.

Prince Rupert Loewenstein passed away in May of 2014.  Fortunately, he left us this extraordinary memoir the previous year.  You can easily skim over the passages that reveal his careful attention to his aristocratic lineage, or to his traditionalist Catholic faith.  However, to do so would be to miss important parts of the makeup of this singular, brilliant mind.  The book will surely appeal to die-hard Stones fans, but I think also to any student of business, European history, or pop culture. Check it out! 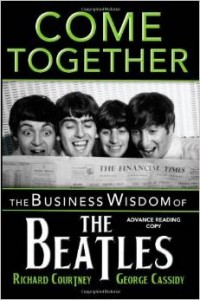 For more on George Cassidy and the book he co-authored on the Beatles, please click here.