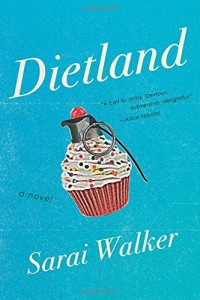 And you’re just tired of it, read Dietland, by Sarai Walker, a funny and sharp debut novel that I found electrifying.  It’s not always polite.  But I can promise that you won’t put it down once you’ve started!  This book will make you laugh, but it will also make you think twice about why a few extra pounds can seem so very important.  (Hint:  losing weight is rarely about your health.)

Dietland tells the story of Plum Kettle, who answers fan mail for the editor of a popular teen girls’ magazine.  Born “Alicia,” she’s been called “Plum” since she was a beautiful, luscious baby.  She lives a quiet life, isolating herself because of her size.  She’s big enough that people stare, though she tries to live as invisibly as she can.

One day she notices that a mysterious girl in multicolored tights is following her.  When Plum finally confronts the girl, she gets caught up in a larger conspiracy against the magazine where she works.

But does the conspiracy end at this one magazine?  Most certainly not!  The conspirators have larger quarry:  the entire media-industrial complex that makes women think they need to be skinny and sexy above everything else.  A “lady terrorist group… with someone named Jennifer as their leader” has demands and is willing to get violent.  With the widely-read London newspaper called the Daily Sun, for instance (the Sun in real life).  The Daily Sun prints a photo of a topless woman on page 3 of each issue.  After the editor’s brother is kidnapped, she agrees to print photos of naked men in that spot instead.  The editor fears the new photos will be bad for business, and she’s right:

Many newsagents began to keep the Daily Sun behind the counter, lest anyone be offended.  Some of them refused to sell it at all or even touch it.  The circulation dropped by half during the first week.  In media surveys, men said they were too embarrassed to read the paper…. The CEO knew cocks were bad for business.  Breasts she could get away with.  Women knew their place, but with men it wasn’t as simple.

Walker imagines a world taken hostage by this conspiracy, and her vision is absurd and funny.  She also imagines the internal journey of Plum – less funny, less absurd.  Plum comes to realize that she’s been eating out of sorrow and loneliness and a sense of profound failure.  No matter how hard she tries, she will never be thin.  Plum looks just like her luscious grandmother – or at least she would, if she stopped drowning her sorrow in food.  Plum comes to find strength in her friendships and later within herself.  No journey of this magnitude is easy or smooth, and Walker doesn’t portray it as such.

This book exhilirated me.  I loved Plum!  I loved those violent conspirators.

The message rings loud and proud through this book:  Love Who You Are.  Find your friends.  And know your enemies.

Amazon selected Dietland as a Best Book of May 2015.  Impressive.

For a brief history of the controversy surrounding page 3 photos in the Sun, click here.  In January of 2015, “rumours” abounded that the controversial photos would no longer run.  Turns out that was a hoax organized by the paper for publicity, which they acknowledged a couple of days later with a wink and a nod and a photo.