If the future of Southern cooking were in Nicki’s hands, we could all rest well at night.  Just look at how she transports a watermelon, with such loving care… 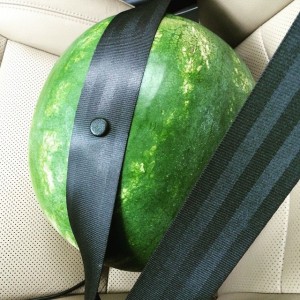 Though she once feared the demise of traditional Southern cooking, Nicki has changed her mind:  she has seen it evolve in intriguing new directions, while retaining its distinctive deliciousness and identity.  Nicki has gathered hundreds of recipes in her wonderful new collection, Southern Cooking for Company (last week’s Bacon review here).  Today, Nicki shares with Bacon readers how she wrote the cookbook – and what she learned about Southern cooking along the way.

I was worried about Southern food withering when I was the daily newspaper’s food writer.  Southern cities had so many restaurants offering other cuisines, and well-stocked specialty grocers for imported foods.  There were more interesting foods to cook and eat, like salade nicoise, fettuccine, gazpacho, sushi, bibimbap, portobellos, arugula.  Who wants beans and cornbread when there’s pad thai?

And Southern ingredients were suffering.  It was tough to find fresh stone-ground cornmeal and real buttermilk.  Factory-farmed chicken didn’t have the full flavors of farm-raised chicken.  It was borderline illegal for most traditional country ham producers to openly sell their product.  Supermarket vegetables were bred for shelf-life and shipping rather than flavor.  No wonder casserole recipes were popular – bland meat and vegetables needed the soup, cheese and sour cream for flavor.

Southern food is in a moment of reinvention.  Small producers and the farm-to-table movement are central to this effort.  So are chefs fiddling around with regional recipes.  Our new Southerners from Latin America, India, the Middle East and elsewhere have brought such richness to the region’s culinary vocabulary.  And home cooks – the beating heart of any culinary movement – are just experimenting away and making food that suits them and the people whose company they cherish. 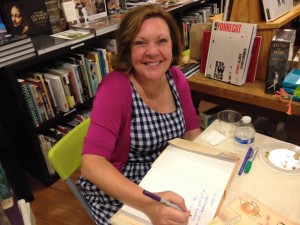 I had an idea of what I wanted when I set out to write Southern Cooking for Company, but I didn’t know what I’d actually get when I asked cooks for recipes.

I wanted an accurate picture of what cooks across the South are making in their own kitchens for their guests.  The answers were more lively and varied than I hoped for, and the future of Southern food seems bright.

Not that there aren’t any old favorites in the book.  Plenty of cooks shared their solid, reliable recipes like salmon mousse, smothered chicken, Hot Brown sandwiches, Lane cake and Key lime pie.  I was pleased to have these – a tried-and-trusted recipe is a true friend when entertaining.

The change I was hoping to capture was the long, slow, seismic shift in the ingredients and technique Southern cooks use.

And that’s exactly what I got: a big batch of recipes that are fully Southern and deliciously different.  I broke them down (in my head—I spend a lot of time thinking about food) into several categories.

Cuisine is like language: if we try to carve it into stone, it stops growing.  So I try not to engage in arguments about what “real” Southern food is.  If it tastes right to you, if it makes you proud and brings people to your table, then it’s real enough.  If Southern Cooking for Company proves anything, it’s that a recipe can be pure Southern and authentic, but not a bit traditional.

Nicki will be at the Vanderbilt Barnes and Noble at 7 pm today to sign books and offer a few treats.  She’d love to meet you!