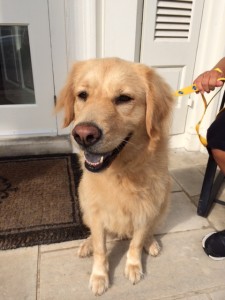 Early yesterday morning, we were surprised by a vision of golden beauty at our front door.  Pepper didn’t see it that way.  She flung herself at the storm door with ferocious barks, woofs, and yips.  The golden retriever smiled and panted, nose on the door.  Pepper took this as an even greater affront and threatened personal violence in no uncertain terms.

I snuck out the side door to assess the situation.  The Golden Girl had no collar, but her good-looking coat suggested she was cared for and her girth suggested that she hadn’t missed any meals.  (It seemed in fact that she was expecting her next meal here.)  My husband and daughter came outside to get to know our pretty visitor and help figure out what to do next.

Pepper, observing our behavior, settled down on the other side of the door, and we introduced the dogs.  Appropriate and respectful sniffing ensued, and the rest of the morning was a heaven of running, chasing, digging, wrestling, and other outdoor doggish fun as the humans sent messages on all social media in an attempt to find the dog’s surely frantic owner.  A trip to the vet was taken to see if Golden Girl was microchipped; no, she was not.  My husband spent the morning outside with her, hailing passing cars while I worried at the book seminar I was attending.

In the early afternoon, a neighbor we don’t know well drove by slowly and stopped his truck.  Golden Girl happily greeted him.  The neighbor had been keeping her for a week while his sister’s family was at the beach.  He hadn’t actually noticed she was gone until just a few minutes before (apparently she had gotten out at breakfast).  He apologized profusely and went on his way.

All was very quiet after the dog left with the neighbor and my husband left to do the errands he’d been planning to do earlier and my daughter left for her room.  It was just Pep and me on the front porch to process the experience.

“I was awfully worried,” I said.  “I thought that her owner was probably panicking and frantically looking in all the wrong places.  Like maybe the owner lived on the other side of Woodmont Boulevard and was spending all her time looking over there and contacting all her neighbors over there.  I was worried about what we would do about the dog tonight, since it was perfectly fine to hang out with her outside today, but it gets more complicated to bring a strange dog inside your house.  And where would she sleep?  Your crate is not big enough for you and her both.  And then I started worrying about getting attached to her if she stayed for a few days and not wanting to find another home for her, and yet not being quite ready to adopt another dog right now.  I’ve worried a lot today,” I concluded, practically out of breath.

Pepper moved over from where she was resting and curled up at my feet before replying.  “I learned how much fun it is to dig under the big boxwood where you can’t get to me,” she said.  “I never thought of that before.  Next time, I might not bark at someone who wants to be a friend.  How about you?” she asked gently.  “Anything you might do differently?”  Before I could answer, she had fallen asleep, and slept contentedly the rest of the afternoon. 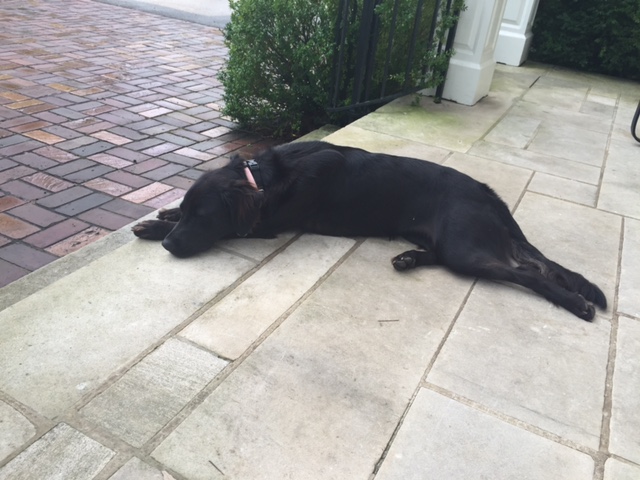