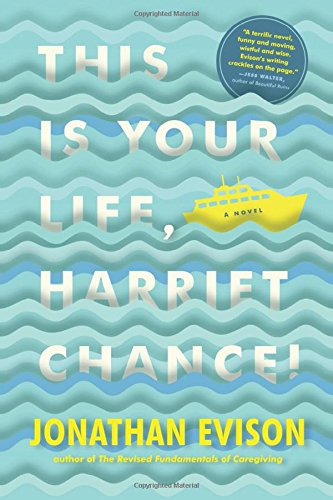 Throw out the pumpkin before it turns black; make way for the turkey and relatives!  It’s time to start thinking about cards.  And Santa.  Trees and menorahs and gifts for the neighbors.  Even if you’ve reined in perfectionist tendencies and holiday fantasies, you’ll want the right book at hand when you need to escape – or to put things in perspective.  This is Your Life, Harriet Chance! by Jonathan Evison will make you laugh and think and give you a break from whatever madness is going on around you.  Harriet’s life is crazier than yours.

Harriet, a recently widowed 78-year-old, has decided to go alone on the Alaskan cruise her husband Bernard secretly arranged for them before his untimely death.  She’s not as alone as she expects to be.  Her daughter Caroline joins her at the last minute, worried about her mother’s mental health.  You can’t blame her:  Harriet says she’s been having conversations with her dead husband.  Bernard’s ghost comes along too, as he’s got some final matters to discuss with Harriet.  A friendly young man who wears T-shirts sporting phrases like “What The Hell Are You Looking At” and “Look, Don’t Touch” is also drawn into their orbit.

Harriet drinks too much and makes scenes.  She and Caroline fight.  Bernard has conferences in the waystation between heaven and hell when he’s not talking to Harriet.

The story doesn’t unfold in linear fashion; rather, the narrator takes us pinball-machine fashion bumping and banging and whizzing through the important moments in Harriet’s life, backwards and forwards in time. The narrator is wise, chatty, and funny; full of sage advice, encouragement, and the occasional stinging criticism.  He’s a wiser Robin Williams genie from Aladdin, taking us on a magic carpet ride through Harriet’s life.

Joys and sorrows accumulate.  For instance, in her marriage:

Harriet at Thirty-Six (April 16, 1973): “It’s true, Harriet, there are a few cracks beginning to show in the foundation of your marriage….  But that’s a normal part of the continuum… Love grows quieter, Harriet, it’s true.  People evolve, or they don’t…. Yes, all in all, things could be a lot worse.  You could be divorced.  You could be a widow.  Gallo could stop selling wine by the jug.  And where would that leave you, Harriet?  Bored and sober.”

You see the moment when she realizes that things have gone really wrong with her daughter:

Harriet at Forty-Nine (May 1, 1986):  “Look at you, Harriet, in your shoulder pads and billowy sleeves, pushing the big five-oh!  …What’s on your flight itinerary, Harriet Chance, now that you’ve finally got that empty nest?  Travel?  A new Hobby?  A second shot at a career? … Not so fast, Harriet.  Ground control, we’ve got a problem:  Caroline has failed to launch.”

Most of all, you see how hard Harriet has been on herself from start to finish.  You also see the ways in which she hasn’t looked hard enough around her:  the ways in which she hasn’t looked at her relationships with courage and with open eyes.  You see that the most amazing changes are always possible.  For as long as you draw breath, you have the ability to broaden your view, stretch your heart, forgive yourself, and love others more truly and well.

I’d like to raise a holiday toast as November rolls in:  Here’s to embracing the madness – and to opening your eyes while you still can.  After all, This is Your Life! 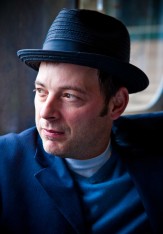 For my prior post on Jonathan Evison, who read at Parnassus a couple of months ago, click here.