It’s the season for growth and improvement, and sometimes that’s just exhausting.  Even when it’s only January 6th.  If you need a laugh instead, and a dose of accepting your own flawed self, pick up Jenny Lawson’s Furiously Happy: A Funny Book About Horrible Things.  It’s been my introduction to Lawson, though you might have read her #1 New York Times bestseller Let’s Pretend This Never Happened or you might be familiar with her as “The Bloggess.”  She has been known to overshare her problems with anxiety and depression in ways that comfort and amuse millions (or at least thousands). 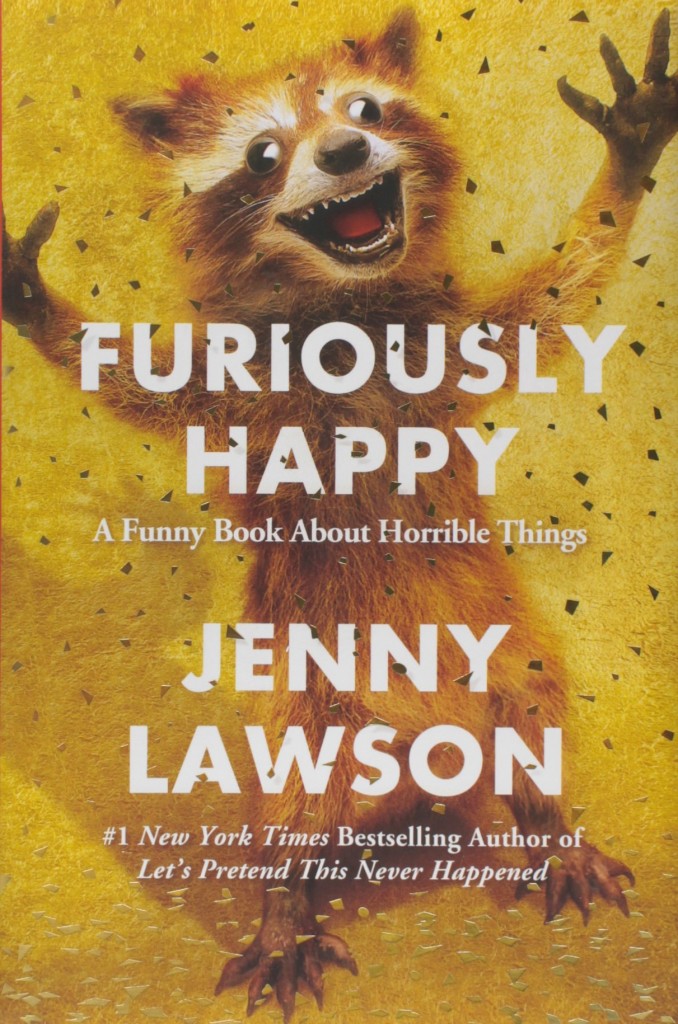 This is not the book for you if you are offended by colorful language.  Here are just a couple of passages to help you decide.

In a lighthearted chapter entitled “An Essay on Parsley, Wasabi, Cream Cheese, and Soup,” Lawson riffs on some of the absurdities surrounding these foods.  On soup:

One time I was at a patio party where I heard they were handing out soup as an hors d’oeuvre and I wondered how that was even possible and then I saw that the waiters were walking around handing out large, flat-bottomed spoons filled with a single bite of soup… Soup given to you one spoonful at a time by people in fancy tuxedos is pretty much the definition of “over privileged what-the-fuckery” and I’m pretty sure it was invented by intoxicated food-service people who thought it would be funny to see if people would actually fall for such shenanigans.  I suspect the next step is crackers that have been premoistened by your waiter’s saliva and then fed to you from his mouth into yours like you’re a baby bird.  In fact, by the time this book is out, spit crackers will probably be the next big thing, and I want it noted that I called it.

In a  more personal chapter describing a bad staph infection she had on her scalp, she reports at some length on her interactions with her doctor:

The most unsettling part of the visit… came when the doctor casually asked if I’ve ever considered having any work done, as they were having a special on Botox.  Then I stabbed him in the knee with a pen.  But just in my mind, because you can never find a pen when you really need one.  In reality I just told him that I wasn’t a fan of paying money to inject paralyzing poison into my face and that I was actually quite proud of my laugh lines, which I view as a badge that tells people I’m not an asshole.  He countered that it was really the frown line between my eyebrows that he’d focus on.  I pointed out that I’d gone through a lot of living to get that frowny wrinkle and I wasn’t about to erase it now.

“MY HUSBAND MADE THAT LINE,” I said, with a defensiveness that surprised even me.  “This line represents every time I have ever argued with him about everything in the damn world.  It’s a line that says, “Don’t cross me or I will cut you.”  It’s practically a medal for time served and I EARNED IT.”

He nodded (surprisingly easily) and went back to fill out out my chart….

As the doctor walked me out he told me to “stop worrying so much” because it’s possible that some of the rash actually is hives caused by nerves, and I made a note to tell my shrink the breaking news that the medical world finally found the cure for my severe anxiety disorder and that the prescription is “Just stop worrying so much.”

I loved this book!  It made me laugh, loudly and often.  It was a comfort too, as a person who can get pretty anxious and stays wound pretty tight.  One small quibble:  It might have been better if an editor had taken a sharper pen to it.  It seemed a bit too long to me, with somewhat uneven quality of content.  But in a way, this book perfectly reflects Jenny Lawson’s “imperfections” – her anxieties, her too-muchness, the way her mind can spin and spin and spin.  She cannot quite love herself the way she is – and yet she tries, and sometimes does.  Along the way, she makes the rest of us laugh, and feel better, too.  I think that’s a pretty terrific accomplishment.