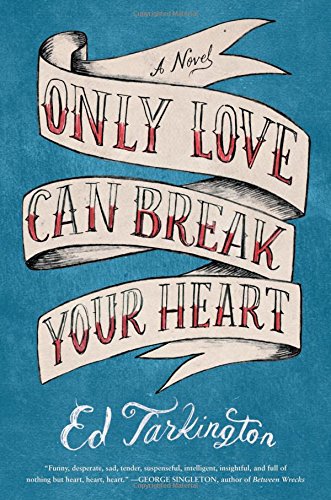 Ed Tarkington is a big man, gentle of heart.  A high school English teacher and wrestling coach at Montgomery Bell Academy, a family man with two young daughters, he’s up at 4 am most mornings to write.  The result is his suspenseful and beautiful debut novel, Only Love Can Break Your Heart, which will take you into the heart of darkness in small town Virginia then lead you back out again.  Ed will be reading at Parnassus this Tuesday night, January 5th, at 6:30.  Please join me to hear him and his good friend, singer-songwriter Will Hoge, set the mood for this Southern gothic tale.

Only Love Can Break Your Heart begins in 1977 in the fictitious Spencerville, Virginia, a place where “elementary school kids would walk alone or ride their bikes to school.  Daughters were safe from the clutches of filthy hippies and horny English rock stars in tight leather britches.  Sons worshipped God, loved their mothers, and feared their fathers… Hence boys like Paul and his friends must have seemed a lot worse than they actually were.”  Only Love Can Break Your Heart is Paul’s story, witnessed and told by his adoring half-brother, Rocky, who at first understands only dimly the choices Paul makes.

The plot moves along briskly with a kidnapping, a cult, and a murder.  A Southern mansion on a hill, “Twin Oaks,” provides the dark central locale.  You’ll keep reading to find out what happens next, but only because you care about the characters – all of whom you recognize and yet all of whom seem uniquely themselves.  Your heart goes out to dear, innocent Rocky and smart, disaffected Paul.  Their father, the “Old Man,” works hard for financial success and acceptance into elite social circles.  His much younger wife, Rocky’s mother, tries hard to make a happy home, but Paul doesn’t make it easy.  Other characters you recognize and understand include the Judge’s daughter Leigh, a good girl who falls in love with bad boy Paul, and the manipulative Patricia, who returns to Twin Oaks and gives Rocky what was once called his “sentimental education.”  Miss Anita, the church lady, has visions and provides just the right creepy sense of foreboding throughout.  By the end of the novel, all the pieces have fallen into place, lessons have been learned, Rocky has grown up, and love has done what it does (break hearts).  But as we know, love also mends them.

Tarkington has written that the novel has its origins in 1978 when his half-sister “stole my six-year-old sister out of her sickbed and disappeared.  I have no recollection of that day.  The story was told to me years later by my mother, after [my half-sister] attempted suicide… and I was finally introduced to the many particulars of a tragedy that had been unfolding around me for as long as I’d been alive.”  In spite of all the trouble she caused, Ed’s half-sister “had always held a peculiar sway over me.  When she still lived with us, she would often invite me into her room while she smoked and listened to her collection of classic rock records… As much as anything else, Only Love Can Break Your Heart is a faithful invention: a deeply personal fiction, steeped in emotional truth, which I consider to be more accurate than facts.”

“I think we read and write stories because we want to make sense of what bewilders us – about the people we love; about our families and communities; about the acts and moments in which we are shaped, and scarred,” Ed continues.  “For me, the art of fiction comes down to being honest without telling the truth.  I couldn’t write truthfully about my half-sister; that story isn’t mine to tell.  Instead, I simply began with a sound and a place and an image that still haunts me: a small child in a car with someone she trusts, oblivious to the hazards of love, jealousy and madness.”

***
A bit more about Ed Tarkington: 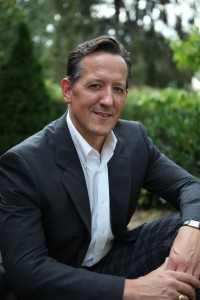 One important thing to know about Ed is that he is an excellent teacher.  “He makes the class interesting, whether we are talking about literature or anything else,” one student says.  “He wants to help the students, but only if they are going to help themselves.  Also, he understands the rigors of student life and that English isn’t the only thing in the world.”  One of my MBA parent friends, who observed him as the keynote speaker at a school event, said that the students’ regard for him was obvious in the way they responded to him.  She was impressed, too.  “His demeanor and delivery were exceptionally balanced, wise, and clued in to the mental space of teenage boys.  He spoke to them without seeming paternalistic or patronizing or even worse, groveling to be considered cool.  Pitch perfect.”

Before coming to Nashville and Montgomery Bell Academy eight years ago, Ed studied in the Graduate Creative Writing Program at Florida State, in Tallahassee.  He misses the fresh, inexpensive seafood there… “We used to get a cooler full of Apalachicola oysters on a Saturday afternoon and sit out on the back porch shucking and slurping all day long.  It cost about fifteen bucks.”  These days, you’re most like to find him at City House in Germantown if it’s date night or the new Family Wash and Garage Cafe if it’s a night out with kids and friends.

If Ed could sit down to dinner with any three people, dead or alive, he’d choose John Lennon, Bill Clinton, and Richard Pryor.  He’s thrilled that the new season of Downton Abbey has begun, but he’s also hooked on The Walking Dead.  He dreams of one day owning a vintage British sports car that he will know how to fix himself.  Two words that scare him? “President Trump.”

I’m not sure how he finds any time at all to read, given teaching and coaching and writing and family and friends, but a reader always does.  Right now, he’s absorbed in Karl Ove Knaussgard’s My Struggle series and enjoying Rachel Kushner’s The Flamethrowers.  “When I was younger, my hero was John Irving, so he’ll always be my #1,” he readily admits.  As a child, his favorite book was Rudyard Kipling’s The Jungle Book, especially the story “Rikki-Tikki Tavi.”  “This might explain my pathological fear of snakes,” he observes.

A bit of advice from Ed?  “Well, I’m a high school teacher, so I’m an expert on other people’s children!” he says, smiling.  “My best advice to parents is to realize that you can’t force your child to be who you want him or her to be, but if you support them in becoming who they want to be, they’ll exceed your highest hopes and expectations in ways that will both surprise and delight you.”  Right now, he’s enjoying watching his daughters grow up.  “They are still at the age where everything is amazing and life is full of laughter and joy.  I’m trying to enjoy every minute of it, because I know it won’t be long before they become teenagers and want nothing to do with me.”

To hear more from Ed about Only Love Can Break Your Heart, check out his terrific interview with Mary Laura Philpott at Salon.

And don’t miss the chance to hear him Tuesday night at Parnassus! 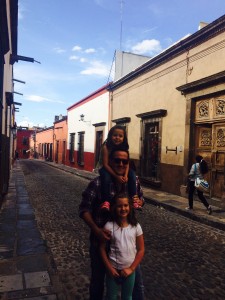 Lettie, Ed, and Mary-Randolph in one of their favorite spots in the world (San Miguel de Allende) 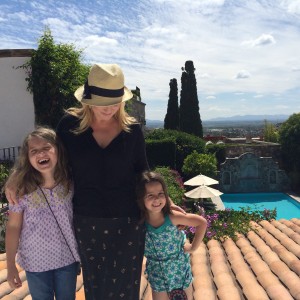