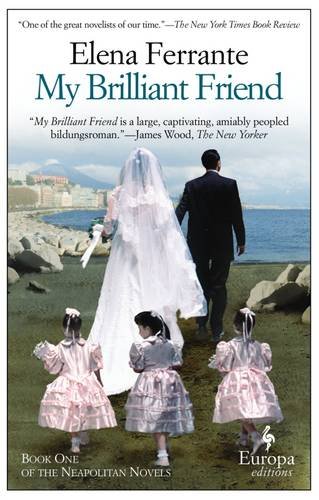 Today, regular Bacon Contributor Laura Cooper loves on the “Neapolitan novels” by Elena Ferrante and explains why she’s becoming a fangirl!  The New York Times recently named the fourth novel in the series, The Story of the Lost Child, one of its top 10 books of 2015.  Laura began at the beginning…. 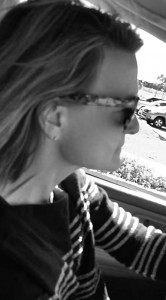 I’ll admit, I love to talk – yes, on and on – about books.  But with My Brilliant Friend, by the pseudonymous and reclusive Elena Ferrante, the only fair review must be one that uses the fewest words to get you reading this novel with the greatest haste.

So let me take that shot.

Once upon a time, in 1950s Naples, a poor shoemaker has a magically beautiful daughter named Raffaella.  As a child, her uncommon looks and disconcerting intellect win her the devotion of teachers and peers.  An uneasy devotion, to be sure, for Raffaella is at once dazzlingly loyal and viciously cruel.

Raffaella’s neighbors are driven by poverty and ambition, by grudges and envy, by family bonds and a murky wartime past.  Their neighborhood is shabby, harsh, and unyielding, blocked by swampy scrubland on one side and railroad tracks on another.  A dark tunnel guards the road to the invisible sea.

For all the trap-like physicality of the neighborhood itself, the people there live in a kind of free-floating peril, a fairytale ether where anything bad can happen, by surprise, unforeseeably, at any moment.  Schoolmates die suddenly from croup, typhus, from tetanus after stepping on a nail.  From unexploded bombs they touch in the scrubland.  They can die from “things that seemed normal”: eating black cherries; swallowing American chewing gum; drinking icy water without first bathing their wrists.  Adults die from falls off scaffolding, get crushed under rubble they’re hired to move, go mad from love of another woman’s husband.  Men randomly, brutally, beat wives and children; they bludgeon rivals, debtors, men who insult their sisters.  Women and children stay “angry as starving dogs,” always in “a rage that had no end.”

Danger flies through the air: rocks that slice a forehead; a steel flat-iron hurled murderously down into a courtyard.  A father tosses his girl through the window, breaking her arm on the asphalt below.  A teacher abruptly crashes onto the classroom floor, gashing her face on the corner of a desk.

There’s even an ogre, the mysteriously prosperous Don Achille (Mafia? wartime black market?), who’s thought to steal children’s toys and destroy men’s businesses, sucking everyone’s treasures up into himself, into the very matter that forms him.  It takes supreme courage just to climb upstairs and knock on his door.

Of course, there’s a fairy godmother too, an irritable, hostile schoolteacher, with the magic power to make fathers pay for school beyond fourth grade.  She can conjure vacations on idyllic Ischia for the student who wins her favor, but she coldly shuns those who disappoint her.

The only constant good in Raffaella’s life is her friend Elena, the novel’s narrator.  Daughter of a porter in the Naples town hall, outside the neighborhood, Elena desperately loves Raffaella (whom she alone calls Lila) long before they even speak, loves her from the day in school when Lila – wild, unkempt Lila – grudgingly reveals that she’s prodigiously smart.  A self-taught, hungry reader, a natural math savant, Lila effortlessly wins every competition in their primary school.  She dreams of making her fortune by writing novels, like Jo March in Little Women, the one book she owns.

But Lila’s parents refuse to send her on to middle school or beyond.  So she digs into neighborhood life, first designing fairy-worthy shoes that her cobbler father rejects (too delicate, too beautiful, too expensive for his heavy-footed customers).  Thwarted again, she finally devotes her talents – her beauty and her intelligence – to the single path left to her: achieving the best marriage she can, this poor shoemaker’s girl, within the neighborhood’s rigid constraints.  She is sixteen years old.

All the while Elena – the hard-working sidekick to Lila’s true genius – scrabbles for an education.  She escapes the neighborhood (during weekdays, at least) for a high school across Naples.  By turns self-doubting and self-aggrandizing, her schoolwork by turns plodding and inspired, Elena struggles to merge her academic success, out in her broadening world, with the values she carries from home, the values absorbing Lila still.  She’s determined to stay even with Lila, to love and to compete with Lila always.  At the novel’s cliffhanger ending, at Lila’s wedding, Elena is left calculating the known and unknowable costs of each girl’s diverging path.

The first of a four-book series Elena Ferrante calls “the Neapolitan Novels,” My Brilliant Friend maps the fierce, complex bond between Lila and Elena through their childhood and adolescence.  It’s a friendship, the Prologue reveals, that thrives and survives even beyond that day, decades later, when Lila finally achieves the one remaining dream of her adult life: “to disappear without leaving a trace. . . . to vanish . . .; [for] every one of her cells to disappear, nothing of her ever to be found.”

Lila and Elena have already lured me deep into the second Neapolitan novel, The Story of a New Name.  I hope that, soon, you’re not too far behind. 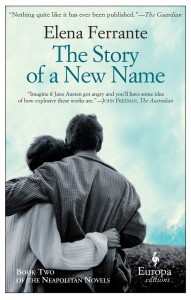 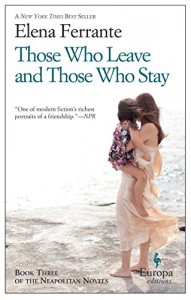 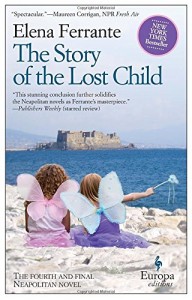 Laura Cooper has recently written on A Little Life, by Hanya Yanagihara, at Bacon (“The Exceptionals: Choking on Super Excellence Yet?”).  Heading into 2016, she’d like to get better at “taking my own time seriously and using it to chase my own priorities.”   At the same time, with their oldest son just a few years from college, “I’m very much focused on the time I have left with him and his younger brothers together at home.”  It’s okay.  The push and pull can be fruitful.  One of the things she enjoyed in 2015 was digging deeper into her cookbook collection, and she hopes to entice her sons to cook with her more often.

What else is she reading, and where does she find her next read?  “I’m also just finishing Patricia Highsmith’s The Price of Salt, the novel from which the new movie Carol is adapted.  I love Highsmith: it’s hard to beat her unflinching honesty about how strange and inscrutable the human heart can be.  I choose books from lots of sources: reviews in the New York Times, Wall Street Journal, the Guardian, the Economist’s Intelligent Life, Brainpickings, and Vogue, among others.  And from Bacon, of course!  (Thanks, Laura – xo.)