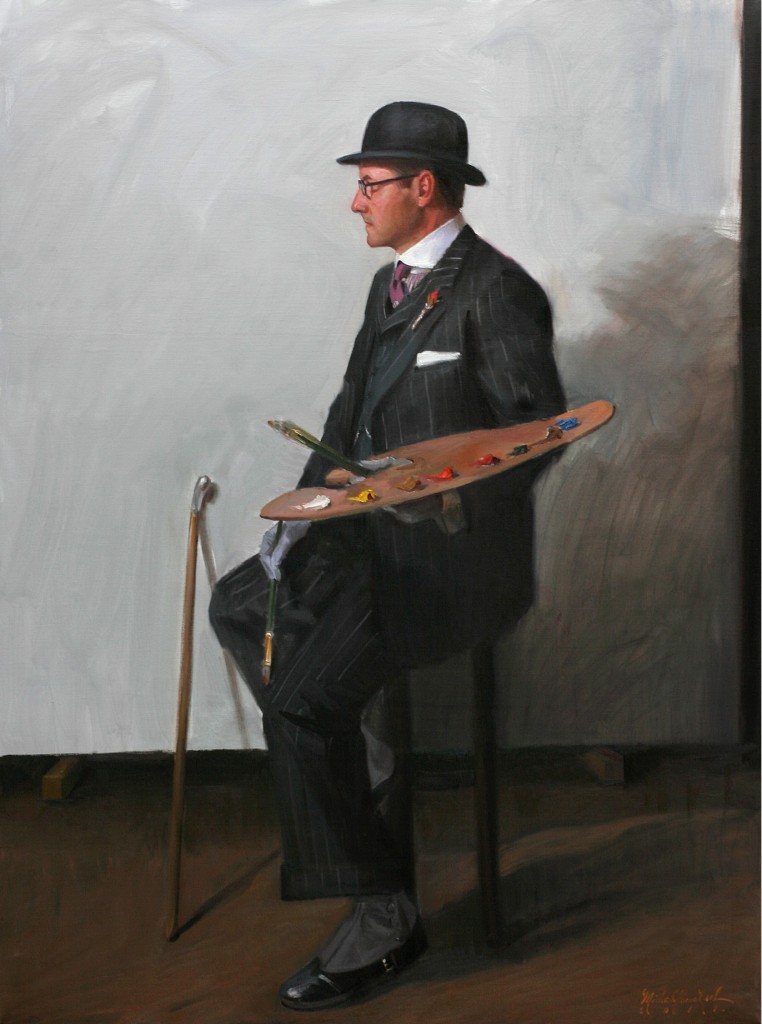 Portrait Artist Michael Shane Neal doesn’t fly under the radar.  If you’re walking down the streets of New York with him, he’ll wear a bowler hat with his pin striped suit.  In Scotland, he’ll don the tartan of his clan.  If he’s not wearing his artist’s smock in the studio, he’s likely to be found in attire that would be equally appropriate in the mid-19th century or the early 21st:  impeccably, impossibly tailored.  Why?  Well – why not!  He has a strong sense of style; he enjoys it; and – very clever, Shane – people remember it.

People will remember Shane Neal for more than his debonair style in years to come.  They’ll recall his tremendous warmth and ease in conversation, his kindness, his intellect, his love of history, and his devotion to his family and his church.  For those who have no connection to the man at all, they will know him through his luminous portraits. 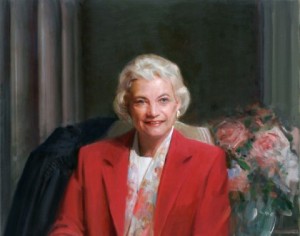 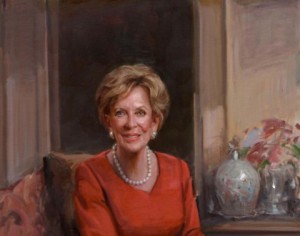 He’s won a major international art award and has had his work featured in national art magazines; you can read more about his accomplishments and awards at his website.

Things you won’t learn at his website:  He’d love to drive a late 1920’s Model A Ford.  In a perfect world, he’d eat eggs, bacon, toast, and grits every single morning (along with his coffee).  A chore he doesn’t mind is shining his shoes, which he admits to “totally loving.”  He kind of hates to exercise, though he does make time for it every week.  He’d rather be on the golf course or spending time with his 2 daughters or wife of 22 years, Melanie.  They particularly enjoy watching Downton Abbey and The Great British Baking Show.  “I’m such an Anglophile at heart,” he reveals (to the surprise of no one!).  He’s happy to browse in antique stores; he enjoys cooking, with his greatest accomplishment in the kitchen being a chocolate mousse with little chocolate cups and spoons; utter contentment is “a fire in my studio fireplace, classical music, a paint brush.”  Almost no one answers this question for me, but Shane will:  What is the meaning of life?  “To love and be loved by others.”

Shane is a 6th generation Nashvillian, educated at David Lipscomb University.  He considers college to have been his formative educational experience, the time of life when he learned “the importance of my faith as it applies to my walk in daily life and the pursuit of my goals.”  Having children was further faith education:  “Now that I know how much I love my children, I can begin to understand how much God loves us.”

Shane has goals for himself as an artist and as a husband, father, and son, but he tries to live in the present each day as well.  “I savor time with the children, even the simple things… breakfast with them before school, slipping away to pick them up in the afternoon and hearing what happened during their day as we drive back home, sitting with them as they do their homework.  I enjoy every minute as I see their childhood passing so quickly.”  What does he hope that they learn from him?  “Determination, hard work, dedication, focus, keeping your chin up, digging to get something right, honesty, integrity.”  The hardest thing about being a parent is the tremendous patience it requires, he believes.  And the worry, of course.

“What would you say you’re good at, Shane?” I ask.  “Apart from painting.”  “Talking!” he replies, laughing.  And he is!  It helps, of course, in his chosen profession.  He’d like to be good at sculpting, which he has tried his hand at and will continue to explore in the years to come. 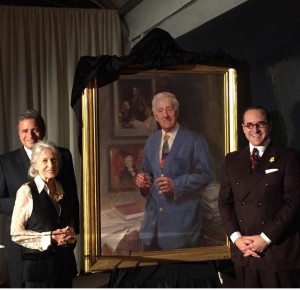 He says it is a dream come true that he is able to earn a living as a portrait artist.  The Nashville Public Library recently commissioned him to paint a posthumous portrait of Nashville luminary John Seigenthaler, unveiled to great acclaim this past November.  At the same time, he painted two small portraits of Literary Award Recipient Jon Meacham, one for the Library and one for Meacham’s family because they liked the first so much.  Shane is a tremendous fan of Meacham’s writing, as well as the work of other historians David McCullough, Doris Kearns Goodwin, and Edmund Morris.  Today, he shares his impressions of Meacham’s most recent biography, Destiny and Power: The American Odyssey of George Herbert Walker Bush. 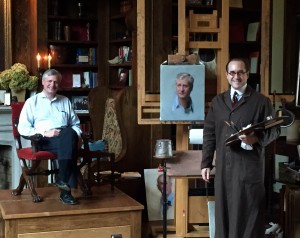 As a portrait artist, I am constantly working to capture two kinds of likenesses.  One, the external likeness, is completely measurable.  How far is the distance between the eyes and the chin?  What’s the size of the nose as it relates to the size of the ears? Proportions that can be captured with a ruler!  The other likeness can be more elusive…the internal likeness; the character and personality of the subject.  Universally the more challenging to capture.  The best portraits contain both, but without question, it’s the spirit of the person that resonates and is the most revealing likeness of a person.  If you catch the soul, you have captured the true essence of your subject. 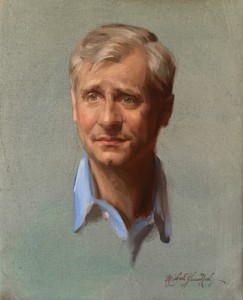 Jon Meacham is an artist of the highest caliber.  He not only paints in words with the precision of an academician, he also captures the heart and soul of his subjects.  He is unquestionably one of the finest “portrait artists” I have ever had the privilege to read.  If you like his works on Jackson, Jefferson or Winston and Franklin, you will love his new biography Destiny and Power, The American Odyssey of George Herbert Walker Bush.

A significant volume of over 800 pages (a good portion dedicated to citations make up the last section of the book), it can be intimidating to say the least even for a biography lover like me.  Not surprisingly, Meacham’s biography reads more like a novel with a flowing style from page one until the end.  He moves gracefully through Bush’s life from his early years to his presidency and beyond with incredible precision, detail, and respect.  The result is a revealing portrait of an American success story, provocative and riveting. 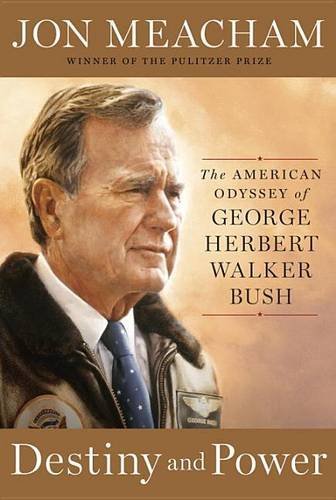 Documented history provides Meacham with the external likeness, the one most of us know from TV interviews, news reports and print articles.  The “Read my lips…” “No new taxes…” “Not gonna do it…” sound bites that make up our memories of the 41st President.  But it’s the tapes, the recorded diary of the President in real time thoughout his term in the White House, that provide Meacham with amazing insight into the inner thoughts of his subject.  We get to know “the last gentleman” who values integrity, honesty, and the power of personal relationships.  Not perfect, but someone who believes in the highest standards of moral decency, diplomacy, and humility.  At the same time, we come to know a man who enjoys wearing “Merry Christmas socks” and took an occasional shower with his dog, Millie!

The book opens with President Bush’s defeat in the Presidential election of 1992, one of the most pivotal professional blows to Bush and a loss which would remain a point of deep frustration until this day.  As the story unfolds, Meacham reveals the real man, the husband, father, and grandfather.  We get to know “41” as a person of deep feelings, committed to doing his best and sticking to his principles, dedicated to doing the right thing.

During his early years, he displayed the incredible competitiveness and dedication that would remain character traits thoughout his life.  From his service in World War II as likely the youngest pilot ever in the Navy, to his rise both in business and politics, Meacham captures a complex person.  You feel Bush’s pain following the loss of a child to the joy of his professional and political successes.  You see a strong believer in compromise, experienced, adroit at foreign affairs, knowledgeable, dedicated to bringing order to a chaotic world and a man increasingly frustrated by partisan politics.

Although it is clear Meacham developed a strong affection for the President, he does display disappointment regarding the Iran Contra affair, saying that Bush’s statements while Vice-President were “unworthy of his essential character.”

With exhaustive research spanning nearly 20 years, Meacham has given us a highly detailed, revealing and unique look at the life of George Herbert Walker Bush.  A wonderfully successful portrait of an ambitious man who grew up at a time in America when mothers encouraged their sons to become President of the United States.