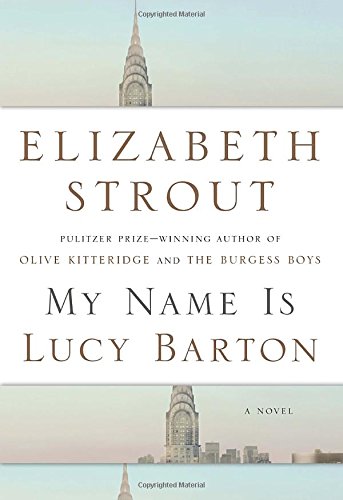 My Name is Lucy Barton is the book your friends will be reading this winter, this spring, and beyond.  I try not to be a bully about recommendations, but you should join them!  I was recently reminded of Muhammed Ali’s approach to the ring: “float like a butterfly, sting like a bee,” and this seems to me Elizabeth Strout’s genius in My Name is Lucy Barton.  Her story of a mother and daughter floats back and forth in time, from the daughter’s impoverished youth in rural Illinois to her subsequent life – marriage, career, motherhood – in New York City.  One of the great questions of literature is posed: can you ever escape your past?  And there is the sting.

The book is in large measure a meditation on the strange, wonderful, terrible power of the bond between mother and child.

It explores a fundamental loneliness of being in the world that you might recognize from Strout’s Pulitzer-prize winning Olive Kitteridge; also the ways we find to make connections and assuage that loneliness.

It is hard to put my finger on the exact quality of the prose – and the sensibility – that sets this novel above other more forgettable books that cover somewhat similar emotional territory.

I will share one passage that I found particularly moving.  Lucy is reflecting on the terror she felt as a child after being locked in her family’s truck.  She only tells you a little bit about her time in the truck.  But she does describe what she feels now, in New York, when she sees a child crying:

In this city of New York, I see children crying from tiredness, which is real, and sometimes from just crabbiness, which is real.  But once in a while I see a child crying with the deepest of desperation, and I think it is one of the truest sounds a child can make.  I feel almost, then, that I can hear within me the sound of my own heart breaking, the way you could hear outside in the open air – when the conditions were exactly right – the corn growing in the fields of my youth.  I have met many people, even from the Midwest, who tell me that you cannot hear the corn growing, and they are wrong.  You cannot hear my heart breaking, and I know that part is true, but to me, they are inseparable, the sound of growing corn and the sound of my heart breaking.  I have left the subway car I was riding in so I did not have to hear a child crying that way.

Claire Messud, in her front page New York Times Book Review piece, writes that “[t]here is not a scintilla of sentimentality in this exquisite novel.  Instead, in its careful words and vibrating si­lences, “My Name Is Lucy Barton” offers us a rare wealth of emotion, from darkest suffering to – “I was so happy. Oh, I was happy” – simple joy.”

Ann Patchett, in her blog piece at Musing, says that “My Name Is Lucy Barton is now my all-time favorite Strout.  It’s short … and exceedingly direct.  The narrative voice will reach out and grab you… It is a splendid novel, a masterpiece in miniature.”

Sam Sacks, in his Wall Street Journal Weekend Edition review, has compared Strout’s style to Hemingway’s:  “His influence is present here in her combination of candor and indirection and in the economy and simplicity of the language that conveys a sense of childlike vulnerability… This debt is worth noting because Hemingway is often characterized as the ultimate man’s writer (an impression, of course, that he himself encouraged).  ‘God, I love Hemingway,’ Ms. Strout has said.  ‘It’s something I don’t even talk about that much anymore because a lot of women don’t like Hemingway.  He’s out of fashion and what’s the point of having the conversation except that I love him?”

The best review I’ve seen is Maria Browning’s at Chapter16.org.  I think she captures the strangeness and beauty of this book in a way that I haven’t been able to convey.

If I were in town this Thursday, January 21st, I’d ask Elizabeth Strout about her affection for Hemingway!  She’s reading and speaking in Nashville as part of the Salon@615 series:

Ticket Information:
This salon is a free, ticketed event.  A limited number of auditorium tickets will be available on-site 30 minutes before show time on the event date.  Advance auditorium tickets are limited and guarantee a seat in the auditorium.  Visit Salon@615.org to buy tickets or for more information. Arrive early for the on-site ticket line.  Once auditorium seats have been filled, guests will be accommodated in alternative viewing locations. 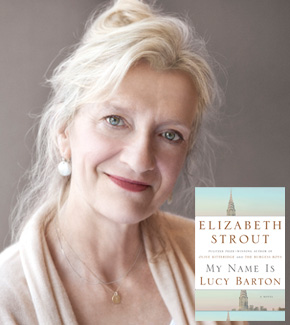 About Elizabeth Strout:
Elizabeth Strout is the Pulitzer Prize-winning author of Olive Kitteridge, as well as The Burgess Boys, a New York Times bestseller; Abide with Me, a national bestseller; and Amy and Isabelle, which won the Los Angeles Times Art Seidenbaum Award for First Fiction and the Chicago Tribune Heartland Prize.  She has also been a finalist for the PEN/Faulkner Award and the Orange Prize in England.  Her short stories have been published in a number of magazines, including The New Yorker and O: The Oprah Magazine.  She lives in New York City.