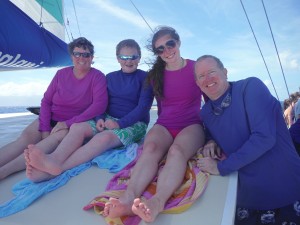 There’s a place some secretly shop for books, at least on occasion.  It’s not Amazon.  Louise Hanson, physician and Medical Director at Vanderbilt Student Health, shares her thoughts today on a recent intriguing find there…

When Jennifer asked me to contribute to her blog, my response was panicked: “But I’m a reader – not a writer!”  So with great trepidation, I decided to take the plunge and attempt to put words to the page and write a post for Bacon.  There is definitely the intimidation factor – after a couple years of being impressed with the articulate and insightful posts, it wasn’t clear to me that this nerdy physician/scientist type has what it takes in this venue.  (From Jennifer:  Of course you do, Louise!!) 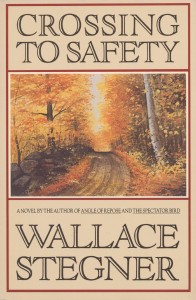 Like the stacks of books in the musty office of an eccentric old English professor, my books sit in piles on the shelves, in heaps on the floor next to my bed, and scattered throughout the house.  And I have a particular fondness for a certain genre:  I love novels that are about books themselves, writing and learning, or the trials and tribulations of the academic world.  Characters like the angsty writer, the nerdy scientist, or the unusual professor are right up my alley.  Topping my list of favorites in this unique “genre” is Wallace Stegner’s Crossing to Safety, a story that follows young professors at a university through their careers and into old age.

So how did The Unchangeable Spots of Leopards by Kristopher Jansma, a book by a young, first-time novelist, end up on my shelf?  Well, it got there the same way that many things end up in my house these days – Target!  On the way to get cereal and laundry detergent and new socks, I can take a bit of refuge from the madness and browse the book section.  And not too uncommonly, I’ve discovered a book that delights (much more than the socks, by the way)! 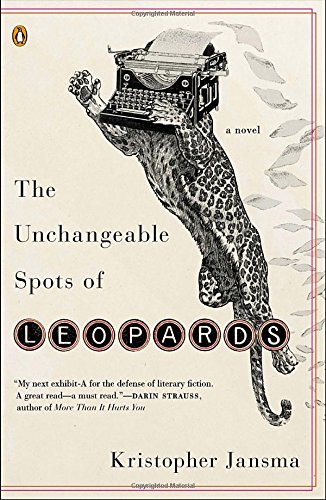 The book jacket of The Unchangeable Spots of Leopards caught my eye with this introduction: “As early as he can remember, the narrator of this remarkable novel has wanted to become a writer.”  So at first glance, this seemed like the typical novel from my favorite genre, but The Unchangeable Spots of Leopards is anything but typical!  Jansma takes us on a wild ride from Raleigh to New York to the Grand Canyon, and then beyond our shores to Dubai, and Ghana, and Iceland and beyond.

The narrator in The Unchangeable Spots of Leopards is never identified.  We first meet him in Terminal B of an unnamed airport, as he bides his time day after day, waiting for his flight attendant mother to return from work.  We are introduced to the childhood mystery novel that he writes while he waits (“The Pink Packet Thieves”) and how it is lost, which leads us to all the other works he’s lost in his life:  “I’ve lost three others since – a novel, a novella, and a biography…..Only fragments remain, which I’ve carried with me around the world and back again.”

And so it begins…. Stories of what was lost, what was found, and everything in between.  The narrator and the other characters change names and locations and roles throughout the book as we are launched from novel to novella to biography, with the short stories and essays of a young author/narrator tossed in between.  And all the while it’s not always easy knowing where we are.  Is that the novel?  The novella?  As the narrator says, “In each of them you can see what the time would be, but only somewhere else.  Between them all, you can, if you wish, determine what time it is here…. These stories are all true, but only somewhere else.”

And yet – despite some of my confusion along the way, which required me to take pause as I read – I found myself spellbound, thinking about this book during the work day, going back to re-read a chapter that night, trying to decide what was real, what was fantasy, and what was fiction within fiction within fiction.  I was amused by the many antics of the narrator, especially when he impersonates a journalism professor at City University in New York and is only outed when he is a victim of his own success, voted Professor of the Year by his students.  Many of these zany antics of the narrator did speak to me as I enjoyed The Unchangeable Spots of Leopards.  I think all our truths are somewhat fluid, as we wear the proper mask to fit the assigned role, afraid of being outed, of being exposed for who we really are, fearful that our frailties will be finally revealed.  Similarly, Jansma’s characters are all flawed, many of them fatally so, and I found it easy to immerse myself in the absurd and insane situations in which the narrator finds himself.  While Jansma uses over-the-top situations to illustrate the unpredictable and at-times hilarious nature of life, I still found The Unchangeable Spots of Leopards a delightful and entertaining read. 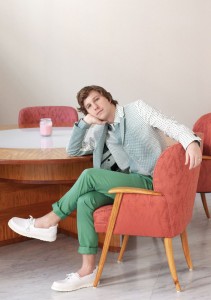 Photo from Paper Magazine; Author Photo by Roy Gumpel Taken when he was 14 years old?

In some sections, Jansma’s language was very simple and clichéd and the repeated inclusion of the leopard, both literally and figuratively, was somewhat contrived (given the title).  It was as if Jansma himself was in character, a first-time novelist sometimes falling in step with the immature style of his narrator, a young and aspiring novelist.  But was that really intended?  I don’t know Jansma’s intentions, but in real time as I read this novel, that was what I assumed, though some of the critical reviews of Jansma’s work have commented on his youth and lack of maturity in his writing.

In the end, The Unchangeable Spots of Leopards turned out to be one of those rare jewels of a book, discovered in the unlikeliest of places.  And as I finished the last page, I continued to wonder, just like the narrator, have we “changed and everything else is the same.  Or is it exactly the other way around?…. It’s like the black spots on black fur – you can’t see them, but they’re there, all the same.”

I met Louise Hanson many years ago when our now-teenage daughters were entering pre-first grade together in Mrs. Hempel’s class.  Our shy 5 year-olds became fast friends, and those were the days when that made us fast friends too.  I admired Louise then and now for gracefully balancing her demanding career as a doctor with engaged parenting, never complaining.  It helps when you’re able to laugh at some of the absurdities of life and even a minor crisis or two.  Louise has the right perspective: if it’s an emergency, get serious; otherwise, you might as well laugh and try to enjoy the ride! 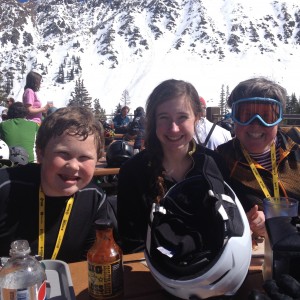 “In addition to learning the basic survival skills like perseverance, respect, honesty, and kindness from Wally and me, I hope my kids see us having a lot of fun and know that joy is such a vital part of a happy life,” she says with genuine enthusiasm.  “We laugh a lot in our house, and most of our conversations revolve around the funny things that happened to us that day.  My kids roll their eyes when I regularly remind them that mom is both ‘fun AND funny’!”  Louise feels lucky to have shared the laughs and the journey for 21 years with husband Wally Smalley.

Louise has worked at Vanderbilt Student Health for over 17 years and says she can’t imagine doing anything else.  “I take care of students who range in age from 17 to 65 – many people are going back to grad school now in their fifties and sixties,” she explains.  “I see a whole range of illnesses, from the undergraduates with STDs, injuries, or minor illnesses, to the older grad students with the usual assortment of middle-aged things like cholesterol, depression, hypertension, and diabetes.  My patients are bright and interesting people and it’s a joy and privilege to serve them.”  Louise is also the medical director of the clinic, which means that she wears the boss hat about 40% of the time.

I asked if her experiences with her patients affects what she says to her teenagers about college.  “Yes,” she responded.  “As they’ve grown up, I have shared in age appropriate ways what goes on day to day – and night to night – on a college campus.  I think that my kids have a good understanding of the pitfalls.  It doesn’t mean they won’t still stumble, but we and they are going into the college years with eyes wide open.”  (Note to any high school teachers or administrators reading this post: wouldn’t it be a great idea to have Louise speak to the seniors at your school?) 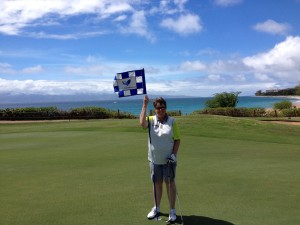 She’d be happy to talk sports with the kids afterwards, as she’s a huge fan – and very sporty herself.  She’ll watch almost anything and enjoy it, though she’s most passionate about the NFL and college football.  One of her life goals is to make it to the Masters; in the meanwhile, she’ll happily play a round of golf with you anytime, anywhere.  On a sunny Saturday, you might find her on the golf course or on a hike with some combination of kids (Hannah and John) and dogs (Paco and Winnie). 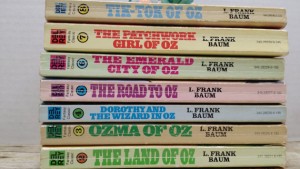 On a rainy Saturday, she’ll read or watch a movie.  She fondly remembers reading a lot of horse books as a girl, particularly My Friend Flicka and Justin Morgan Had a Horse.  She also “devoured” the 14 books in the Oz series, as did I!  I’m so grateful for her lovely review at Bacon today.