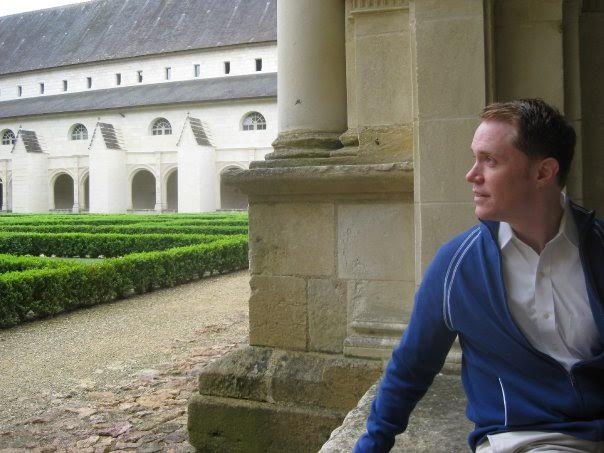 Roger Moore met me at a local coffeeshop in his signature tweed jacket and pocket square:  the stylish professor!  He brought his boyish good looks and charm and a copy of his gorgeous new book, ten years in the making, Jane Austen and the Reformation: Remembering the Sacred Landscape.  Roger is Associate Dean of the College of Arts and Science and Principal Senior Lecturer in English Literature at Vanderbilt, where he has taught since 1995.  He is also, very kindly, a regular contributor at Bacon.  We had arranged to meet at Fido to talk about his new book. 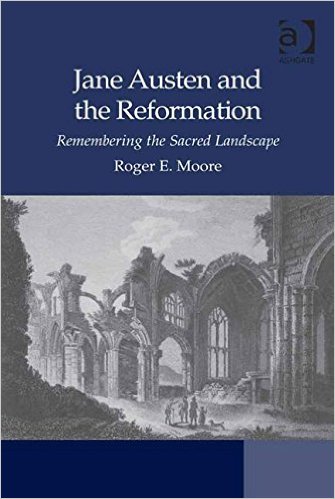 Until quite recently, prevailing scholarship held that Jane Austen plumbed the depths of the human heart and carefully observed the social world around her, but was largely uninterested in politics or religion.  Lately, there’s been more attention to how her fiction participates in the larger conversations about both taking place in early 19th century English society (Austen b. 1775 – d. 1817).  Jane Austen and the Reformation characterizes the author as “an astute commentator on English religious history, someone more polemical and engaged with religious affairs than scholars have previously assumed.”  The book is about Austen, but it is also about the impact of the Protestant Reformation on the English landscape and mindset, exploring the “long shadow over English history” that it casts.  Between 1536 and 1540, centuries’ worth of monasteries and abbeys were demolished or converted.  The only comparable period of destruction in English history is World War II.

“It is tempting to view Austen as someone very much like ourselves,” Moore writes, “a person whose wit and insight into human character seem very modern and whose political and social sensibilities mimic 21st century ones.  This book combats this temptation by locating Austen firmly within her own age, when monasteries were very much a topic of public discussion and debate.  Like many in the 18th and early 19th centuries, Austen sympathized with a pre-Reformation world whose social, economic, and spiritual values were quite different from our own.  This book suggests that, far from being a woman who would find the modern world congenial, Austen was suspicious of the changes that made it possible.”

I asked Roger how he got started on this project.  He sheepishly admits that he wasn’t much interested in Jane Austen to begin with; his specialty is the literature of the English Reformation.  When he was assigned to serve as advisor to a student writing an honors thesis on Jane Austen, he had to get up to speed fast.  Over time, he began to see more and more connections between Austen’s work and his own interests.  “I should have listened to my mentor,” he notes.  “She says that everyone always comes around to Jane Austen in the end!” 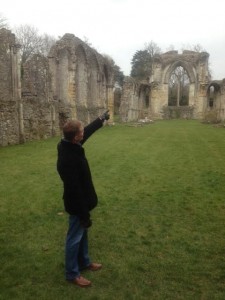 As he researched Austen and her time, Roger became increasingly attracted to the time period in which she lived.  “The early 18th century has the most beautiful of everything – music, architecture, dress – I should have been born then!” he remarks, half-jokingly.  Doing research for the book, Roger made about ten trips to England, Scotland, and France, visiting ruined and converted abbeys.  “Many times I felt like Jane Austen or one of her characters, looking for remnants of the past in the ruins that remained,” he observes.  His favorite visit?  To Whitby Abbey on the North Coast of England, in Northumberland, one of the oldest abbeys still partly standing.  “It is perched on a headland, and the day we visited it was raining and so atmospheric.  Absolutely haunting.  Part of Bram Stoker’s Dracula is set there,” he remembers.

Roger signed a contract for the book in 2013, with a due date of August of 2014, so most of the writing took place during that year.  At the same time, he was assuming his role as Associate Dean.  It was the most challenging year of his life, he says, and yet he came through it feeling a new kind of confidence in what he could accomplish if pressed. 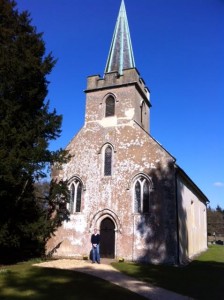 At St. Nicholas, Steventon, where Austen worshipped for the first 25 years of her life (her father was rector)

Roger and I talked about Jane Austen for a while.  It seems very sad to me that she lived such a financially precarious life, with little recognition during her lifetime, and now she is a cottage industry both in the university world and in popular culture.  What does one make of this?  What would she have made of this?  Roger thinks she would have been very surprised.  “She was a very humble person.  She was witty and sophisticated, but always the poor relation.  Always a bit on the outside.”  If she’d had resources?  “I think she would have spent more time in London.   I think she would have wanted to devote more time to writing – and I think she would have found the ‘room of her own’ in which to do it.”  Roger thinks she has come to occupy such a prominent place in scholarly and popular circles because she is the company of the greatest writers, those who deal with the elemental questions of how we find each other and how we fit into society.

I also asked Roger who, among contemporary authors, the spiritual descendants of Jane Austen might be.  His answers:  Barbara Pym, writing about people who live “just outside the Harrod’s delivery zone”; Jane Gardam, writing about love and traditional English village life; Alexander McCall Smith, writing with a lighter touch but with a certain similarity of sensibility and observation.

As the last question of the hour, I asked Roger what he would ask Jane Austen if he could sit down with her for tea (in her time and place).  He considered.  “I think I might ask about her engagement,” he replied.  I had to do a little research to be reminded of the facts.  From Claire Harmon:

“What we do know is that on 2 December 1802, when Jane and her sister were visiting Manydown House in Hampshire, Harris Bigg-Wither, the 21-year old younger brother of Jane’s friends Alethea and Catherine, proposed marriage to her – and was accepted.  Jane was 6 years older than Harris, and a good deal cleverer, but they had known each other a long time, and he must have had some encouragement from her in the months or years before popping the question, or he wouldn’t have dared ask.  And she said yes, after all:  There might have been plenty of mutual regard, even love.

But after what must have been an agonizing night of second thoughts, Jane left Manydown abruptly and in confusion, having broken off her very short engagement.

Part of her decision not to marry Harris must have been the lack of really powerful feeling:  If she’d been deeply in love, Jane would have let very little stand in her way.  But by 1802 there were other strong considerations for Jane, perhaps the most pressing being the happiness of her beloved sister.  Cassandra’s fiancé, Tom Fowle, had died abroad in 1797 and Cassandra had withdrawn completely from the marriage market afterwards.  Jane had always idolized her elder sister and stuck with her through thick and thin:  ‘If Cassandra’s head had been going to be cut off, Jane would have her’s cut off too,’ their mother had once remarked.” 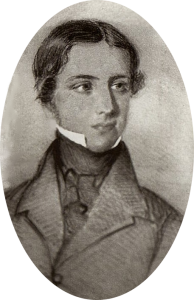 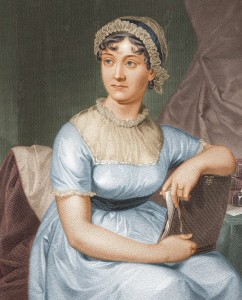 Jane Austen, from a drawing by sister Cassandra
(wikipedia)

All too soon, it was time for Roger to get back to campus for a meeting.  Check out his beautiful new book for a deeper exploration of Jane Austen, the English Reformation, and the nostalgic tradition of which she is a part.  For Roger’s latest Bacon post, on Susan Barker’s The Incarnations, click here.