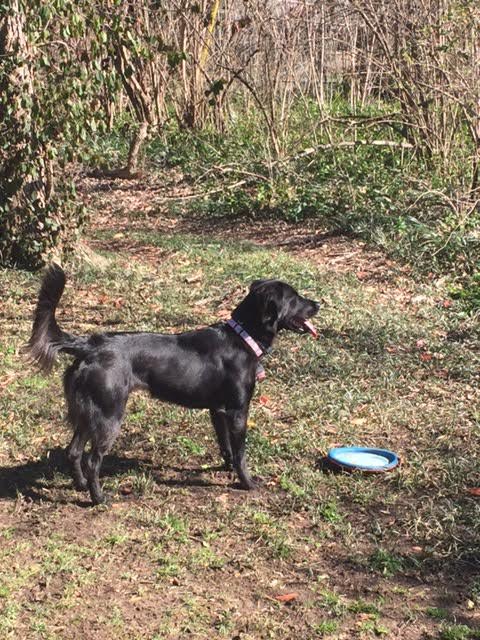 At the back of our yard grows a great thorny hedge, as dense as the thicket that grew up around Sleeping Beauty’s castle those hundred years she slept.  In the winter and early spring, when the branches are bare, you can just see through to the yard on the other side.  This winter, Pepper became interested in the thicket and what lay beyond: a big brown dog named Jake.

One late afternoon, as on many others, Pepper dashed straight to the thicket.  She stood, waiting and watching, until Jake realized she was there.  He dashed up to his fence – just visible – and barked his loudest, friendliest greetings.  Pepper rarely barks back.  She just gazes, her tail wagging furiously.  If she has a frisbee in her mouth, she drops it.  Sometimes she runs back and forth along the border of the thicket and he follows, barking all the while.

When we came back in, Pepper went straight to the loveseat in the kitchen while I sat down at the computer.  She was strangely silent.  Everything about her drooped, from her feathery tail to her soft shaggy ears.  I left the computer and sat down beside her.  “You’re not acting like yourself, Peppy,” I observed.  “Where’s the little black tornado I know and love?”

She sighed in her doggish way, which sounds kind-of like “Pssshhhhhhhew.” “I’m depressed,” she replied.

“Dearest Peppercorn,” I asked gently, holding her head in my hands. “What’s wrong?”

“You know…”  She couldn’t seem to finish her sentence.

“Is it something about – Jake?”

Then she perked up.  “But you could take off the outside collar, the mean buzzy one that keeps me out of the thicket!  I could make my way through and jump over the fence!  We could chase each other and wrestle and play with tug toys together!” 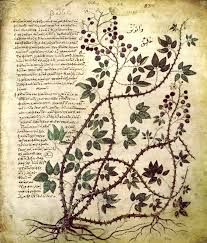 “Oh Peppy, we have to leave that collar on,” I told her regretfully. “It helps you know where our yard ends and other people’s yards begin.  And it’s not safe in the thicket.  There are snakes and possums and maybe even coyotes sometimes.  Also ticks, spiders and chiggers.  Plus it’s basically an impenetrable thicket.”

“Oh Peppy,” I said again, sadly. “The thicket isn’t safe for him either.”

“So it’s just like I thought.”  She curled up tight, not even wanting belly scratches.

I petted her head and stroked her back.  I was sad, too.  We sat in silence for a while.

She stayed curled up in her ball but lifted her head ever so slightly.

“Let’s try,” I said.  “I’ll start it.  Once upon a time, there lived a handsome brown dog with chestnut curls and a collar as red as blood.  His bark was warm and strong and loud.  He lived beyond the great wild thicket, the great wild dangerous thicket where all the great wolves prowled…”

“So one day, the beautiful black dog decided to brave the thicket, the great wild dangerous thicket where all the great wolves prowled, but she didn’t know what dangers lie ahead….”

“She didn’t know, but she didn’t fear, and the beautiful black dog went into the woods…”

In the immortal words of Steven Sondheim… 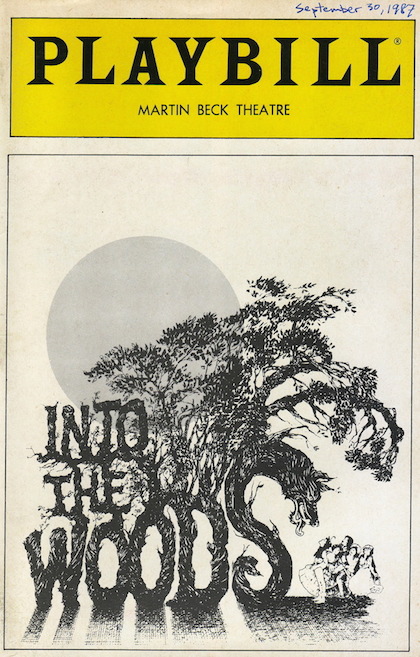 [ALL]
The way is clear,
The light is good,
I have no fear,
Nor no one should.
The woods are just trees,
The trees are just wood.
No need to be afraid there-

[BAKER]
There’s something in the glade there…

[STEPMOTHER & STEPSISTERS]
To see the King-

[BAKER & WIFE]
To make the potion-