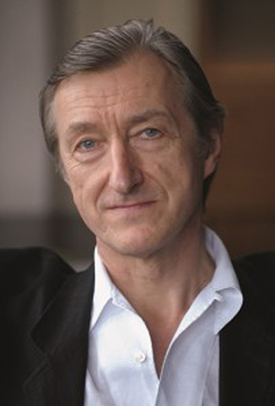 Vanderbilt does it again, bringing serious star power to Nashville through its Chancellor’s Lecture Series!  The lecture is free and open to the public, and you might want to arrive on the early side this Wednesday evening, March 23d, to meet Julian Barnes, often described as one of Britain’s most brilliant and sophisticated novelists.  (Event details at the end of the post.)

Barnes won the Man Booker Prize in 2011 for The Sense of an Ending, but the book I reread is Flaubert’s Parrot (1985).  The French vibe has me thinking of steak au poivre:  peppery, searing, aflame, red meat artfully prepared.  Here are a few quotes to whet your appetite for his visit or his work.  A bit of context:  the narrator of Flaubert’s Parrot, a physician and Englishman, might be losing his mind in the wake of a profound grief.  He has become obsessed with understanding the life and work of Gustave Flaubert (b. 1820- d. 1880)…

“…I remembered Lemot’s famous cartoon of Flaubert dissecting Emma Bovary.  It shows the novelist flourishing on the end of a large fork the dripping heart he has triumphantly torn from his heroine’s body.  He brandishes the organ aloft like a prize surgical exhibit, while on the left of the drawing the feet of the recumbent, violated Emma are just visible.  The writer as butcher, the writer as sensitive brute.”

“… I remember the end of [Flaubert’s] L’Education Sentimentale.  Frederic and his companion Deslauriers are looking back over their lives.  Their final, favourite memory is of a visit to a brothel years before, when they were still schoolboys.  They had planned the trip in detail, had their hair specially curled for the occasion, and had even stolen flowers for the girls.  But when they got to the brothel, Frederic lost his nerve.  Such was the best day of their lives.  Isn’t the most reliable form  of pleasure, Flaubert implies, the pleasure of anticipation?  Who needs to burst into fulfilment’s desolate attic?” 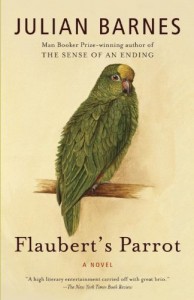 “How do we seize the past?  Can we ever do so?  When I was a medical student some pranksters at an end-of-term dance released into the hall a piglet which had been smeared with grease.  It squirmed between legs, evaded capture, squealed a lot.  People fell over trying to grasp it, and were made to look ridiculous in the process.  The past often seems to behave like that piglet.”

“I don’t much care for coincidences.  There’s something spooky about them: you sense momentarily what it must be like to live in an ordered, God-run universe, with Himself looking over your shoulder and helpfully dropping coarse hints about a cosmic plan.  I prefer to feel that things are chaotic, free-wheeling, permanently as well as temporarily crazy – to feel the certainty of human ignorance, brutality and folly.  ‘Whatever else happens,’ Flaubert wrote when the Franco-Prussian war broke out, ‘we shall remain stupid.’

“The first time Flaubert saw his name advertised – as the author of Madame Bovary – shortly to be serialised in the Revue de Paris – it was spelt Faubert.  ‘If I make an appearance one day, it will be in full armour,’ had been his boast; but even in full armour the armpit and the groin are never completely protected.”

“I like these out-of-season [ferry] crossings.  When you’re young you prefer the vulgar months, the fullness of the seasons.  As you grow older you learn to like the in-between times, the months that can’t make up their minds.  Perhaps it’s a way of admitting that things can’t ever bear the same certainty again.  Or perhaps it’s just a way of admitting a preference for empty ferries.”

“Nowadays we aren’t allowed to use the word mad.  What lunacy.  The few psychiatrists I respect always talk about people being mad.  Use the short, simple, true words.  Dead, I say, and dying, and mad, and adultery.  I don’t say passed on, or slipping away, or terminal (oh, he’s terminal?  Which one?  Euston, St Pancras, the Gare St Lazare?), or personality disorder, or fooling around, bit on the side, well she’s away a lot visiting her sister.  I say mad and adultery, that’s what I say.  Mad has the right sound to it.  It’s an ordinary word, a word which tells us how lunacy might come and call like a delivery van.  Terrible things are also ordinary.” 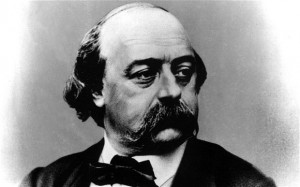 In the spirit of Barnes’ narrator, let’s give the last line to Flaubert:

“Words came easily to Flaubert; but he also saw the underlying inadequacy of the Word.  Remember his sad definition from Madame Bovary:  ‘Language is like a cracked kettle on which we beat out tunes for bears to dance to, while all the time we long to move the stars to pity.’

An Evening with JULIAN BARNES 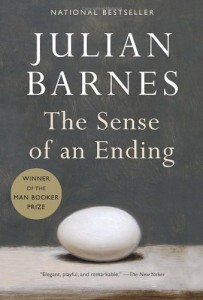 Barnes is the recipient of several awards and honors for his work, including the 2011 Man Booker Prize for The Sense of an Ending, and the David Cohen Prize for Literature.  A widely celebrated postmodernist writer with a unique gift for welding together disparate genres, his other books include: The Noise of Time (scheduled for a forthcoming U.S. publication), Keeping an Eye Open, Levels of Life, Through the Window, Pulse, Nothing to be Frightened of, Arthur & George, The Lemon Table, The Pedant in the Kitchen, In the Land of Pain, Something to Declare, Love, etc., England, England, Cross Channel, Letters from London, The Porcupine, Talking It Over, A History of the World in 10½ Chapters, Staring at the Sun, Flaubert’s Parrot, Before She Met Me, Metroland.

Mark your calendar to attend this special reading by one of the most prolific and nuanced writers of our time.

Seating is limited and available on a first-come, first-seated basis. Tickets and reservations are not issued for this event. Parking is available in the West Garage, 25th Avenue S., near the intersection of Children’s Way.

Sean Kinch has written a beautiful piece for chapter16.org on Barnes that both surveys and analyzes his work and highlights what’s so remarkable about it.  Sean is a high school English teacher at MBA who did his undergraduate work at Stanford and received his PhD at the University of Texas.  He writes regularly at chapter 16 (and can still sink the three).

Image of Flaubert and an excellent article on same at http://www.telegraph.co.uk/culture/9767618/Opinions-give-knowledge-its-texture-and-style.-And-I-should-know-Im-an-idiot.html